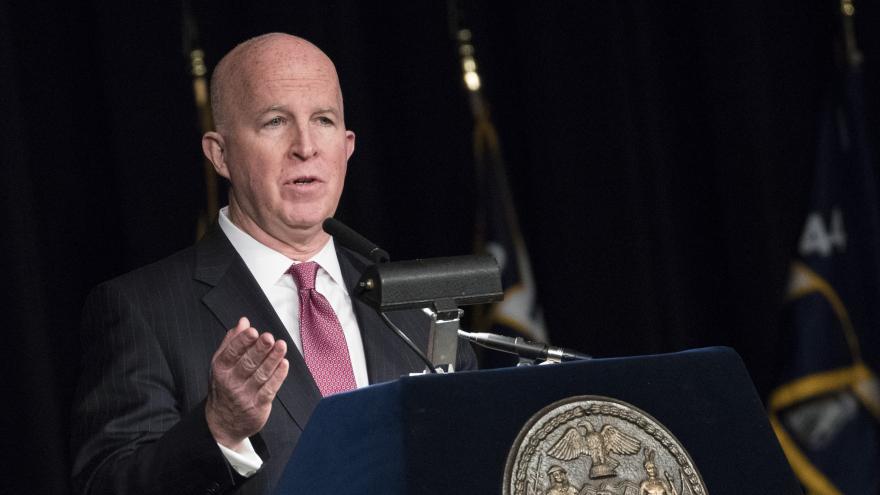 (CNN) -- New York Police Department Commissioner James O'Neill is resigning from his post atop the country's largest police force and will take a job in the private sector, he said on Monday.

NYPD Chief of Detectives Dermot Shea, who has been on the force for 28 years, will replace O'Neill, Mayor Bill de Blasio said.

O'Neill began his tenure in September 2016. He previously served as NYPD Chief of Department and has worked as a police officer in New York City since 1983, according to his NYPD bio.

His resignation comes just months after O'Neill announced that he was firing Daniel Pantaleo, the officer accused of fatally choking Eric Garner in 2014. The firing was a fraught choice for O'Neill, who said in August that he would probably not be happy with the decision if he were still an officer.

The New York City Police Benevolent Association, the union representing NYPD officers, slammed the firing and unanimously approved a resolution of no confidence in him.

Still, O'Neill said Garner's firing was not a motivating factor in his decision to resign. Instead, O'Neill said, he wanted to spend more time with his family and said he "couldn't pass up" the private sector opportunity, which he declined to detail.

O'Neill moved away from stop-and-frisk

During O'Neill's tenure, the NYPD moved away from the aggressive "stop-and-frisk" policy of former mayors Rudy Giuliani and Michael Bloomberg. The policy was found to be unconstitutional for illegally targeting blacks and Latinos.

Proponents of the policy had warned that crime would rise without aggressive policing. However, New York City -- like many American cities nationwide -- has seen a broad decrease in crime over the past few years, especially compared to its height in the 1990s.

"The relationship between the community and the police is fundamentally different than it was a few years ago," de Blasio said Monday. "This is a safer city and a fairer city and we have proven that those two ideas go together."

O'Neill has also spoken out about a series of officer suicides this year and tried to end the stigma of officers seeking mental health help. In addition, in June, the commissioner offered a historic apology to the LGBT community for the NYPD's actions during the Stonewall Riots 50 years ago.

Shea, who will take over on December 1, grew up in Sunnyside, Queens, and is the son of two Irish immigrants. He praised his predecessor's tenure as a success and said he plans to maintain and build on the policies that have reduced crime and incarceration over the past few years.

"A 28-year veteran, he knows what it's like to walk a beat and lead a precinct. He helped build the strategies that have driven crime to record lows. He's a proven change agent," de Blasio tweeted.