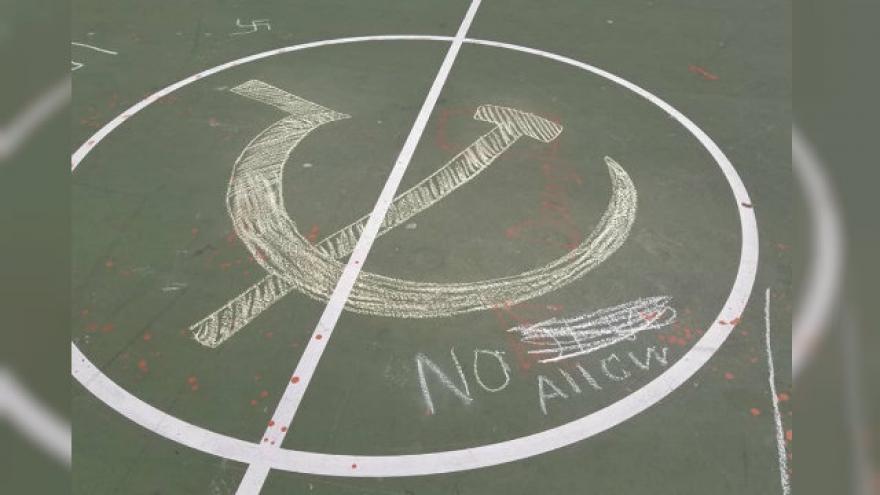 "I am appalled and disgusted by the Swastikas and other anti-Semitic symbols of hate that were scrawled in a Queens schoolyard," Cuomo said in a statement. "In New York, we have zero tolerance for such vile acts of anti-Semitism."

Dozens of swastikas, a Nazi eagle and the words "Hail Hitler" (sic) were found drawn in chalk on the pavement of PS 139's schoolyard.

Councilwoman Karen Koslowitz, who represents the district, told CNN her office received photographs from a resident in the apartment building next to the school and immediately informed the police. According to Koslowitz, the area is a predominately Jewish neighborhood.

Koslowitz told CNN she heard stories from her mother, who came from Poland, about anti-Semitic incidents in Europe in the last century. Koslowitz, who grew up in New York, said she never believed an act of this nature could occur in the city.

"This really just has to stop," she said. "There's no question about it being a hate crime."

There have been 36 anti-Semitic crimes reported in the city so this year, compared with 21 for the same time last year, according to a New York Times report, which cited police.

City Council member Chaim Deutsch, chairman of the council's Jewish Caucus, called for a bill that would "require educational outreach to teach about the impact of hate, bias, and anti-Semitism."

"This has gotten completely out of hand," Deutsch said in statement.