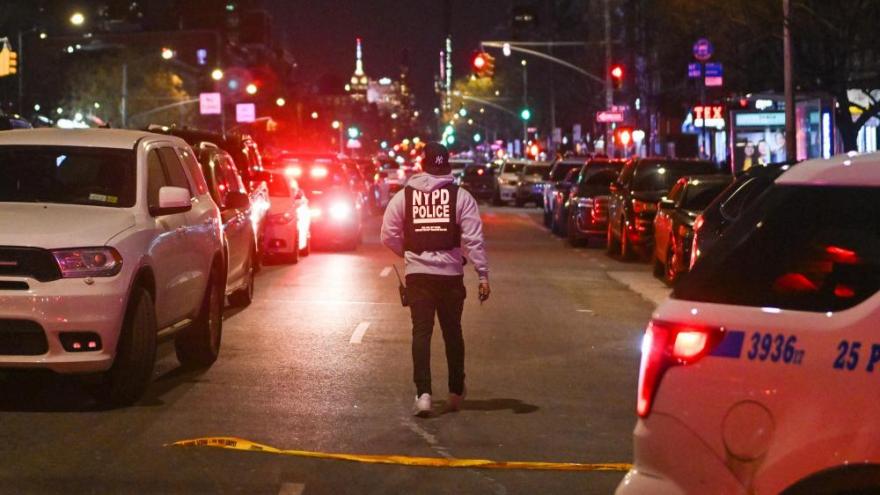 Police lock down the scene after two New York officers were shot, on January 21 in Harlem.

(CNN) -- While New York police grieve the death of Officer Jason Rivera -- a young man who wanted to bridge gaps between the department and his community -- the city's new mayor has pledged a return to controversial policing tactics to try to rein in violent crime.

Mayor Eric Adams further is expected to unveil a broad plan to combat gun violence Monday afternoon, a city official said. The announcement -- which had been slated for this week -- was expedited after Rivera, 22, was shot and killed while responding Friday to a domestic incident in Harlem, the city official said.

A second officer, Wilbert Mora, 27, was in critical condition Sunday after surgery, the New York Police Department said. The suspected shooter, Lashawn McNeil, was listed Friday in critical condition, the NYPD told CNN. McNeil was confronted by a third officer on the scene after he tried to run and was struck by two rounds, police said.

Following a rash of violent crime that includes Rivera's killing, Adams plans to bring back a plainclothes policing unit, he announced Sunday. The practice ended in 2020 following intense scrutiny for its ties to stop-and-frisk policies.

"I talked about this on the campaign trail. Our team has done the proper analysis, and now we're going to deploy that," Adams told CNN on Sunday.

Details of the new unit have yet to be revealed, but NYPD Commissioner Keechant Sewell asked precinct commanders to select candidates, a city official said Sunday.

Those chosen would get specific training, the official said, and the focus of the unit would be the removal of illegal guns from circulation.

The gun used in Friday's shooting, a Glock 45, was stolen from Baltimore in 2017 and had a high-capacity magazine that can hold up to 40 additional rounds, according to NYPD Chief of Detectives James Essig.

Five NYPD officers have been shot this month, police said, with Rivera the first to lose his life. Flags on all city-administered buildings were lowered to half-staff over the weekend.

Services for Rivera will take place Thursday and Friday at St. Patrick's Cathedral in New York, the Police Benevolent Association of the City of New York tweeted.

"We respectfully ask for your support," the police union said.

Rivera, who entered the police academy on November 2, 2020, according to a source with knowledge of the officer's records, had said his first-hand experience with the controversial policy of stop and frisk and the department's effort to bolster community relations ultimately propelled him to join the department.

"I remember one day when I witnessed my brother being stopped and frisked," Rivera wrote in an undated letter to his commanding officer that was penned while he was in the police academy. "I asked myself, why are we being pulled over if we are in a taxi," Rivera wrote.

Rivera had said his community of Inwood was at odds with the NYPD but soon saw the department make efforts to change its ways, according to the letter obtained by CNN.

The policy of stop and frisk was ruled unconstitutional in 2013, and former Mayor Bill de Blasio dropped the city's appeal of the ruling in 2014. Critics argued the practice disproportionately targeted people of color.

Rivera wrote that he was so moved by the NYPD's effort to change that he wanted to be the first person in his family to become a police officer in what he called "the greatest police force in the world."

"When I applied to become a police officer, I knew this was the career for me," Rivera said.

A Texas deputy and a DC officer were also shot

Just last year, intentional killings of law enforcement officers reached a 20-year high. And the first month of 2022 has already been marred by tragedy.

Hours later, a police officer in Washington, DC, was shot after responding around 9 p.m. to the scene of a suspicious person, the department said. As officers tried to make contact with the person, he pulled out a firearm and starting firing at police -- wounding one of the officers, police said.

The injured officer was released after treatment at a hospital, DC Metropolitan Police said.

'We have to stop the flow of guns'

Following Rivera's shooting death in New York, officials there quickly announced efforts to better handle the recent spate of violent crimes. The city's crime rate has risen in recent months, and though not near the rate of the early 1990s, the crime rate in November -- the most recent month for which the city has released data -- jumped by 21.3% from the same period last year, per the NYPD.

An interstate task force of federal, state and local law enforcement representatives from nine Northeastern states is due to meet Wednesday to work on how to curb the flow of illegal firearms, according to New York Gov. Kathy Hochul's office.

Adams larger plan to combat violence is expected to address "the underlying reasons you're seeing crime" in New York, including institutional problems such as education, he told CNN.

"We have to go after those laws that are not realistic on understanding what's happening on the ground," Adams said Sunday. "We have to stop the flow of guns. We are removing thousands of guns off our streets, and it appears as though for every gun we remove from the street, five are coming in. That's unacceptable."

The city is also dealing with recent attacks in the subway system. On Sunday, a 62-year-old man suffered minor injuries after being pushed onto subway tracks in Lower Manhattan, according to the NYPD.

The victim, who made contact with the lead train car while on the tracks, was taken to a hospital where he was treated for a leg laceration, police said. No arrests have been made, and the investigation is ongoing, the NYPD said. The victim was not named publicly.

Sunday's incident followed a similar one on January 15 in which a 40-year-old woman was killed after being pushed in front of an oncoming subway train. It was a random attack, and the suspect was charged with second-degree murder after he turned himself in less than an hour later, police said.

On New Year's Day, a good Samaritan died while trying to help a man who fell onto subway tracks during a gang assault.

"These incidents are unacceptable and have to stop," Metropolitan Transportation Authority Chair and CEO Janno Lieber said in a statement.

"I don't want to tell people that they should stand on subway platforms and feel like they're, you know, in threat of their lives," Lieber said Sunday in an interview with CNN affiliate WABC. "But everybody should stand away from the edge of the platform."

The city will work to partner mental health professionals with police personnel in responding to the subway system incidents, Adams said.