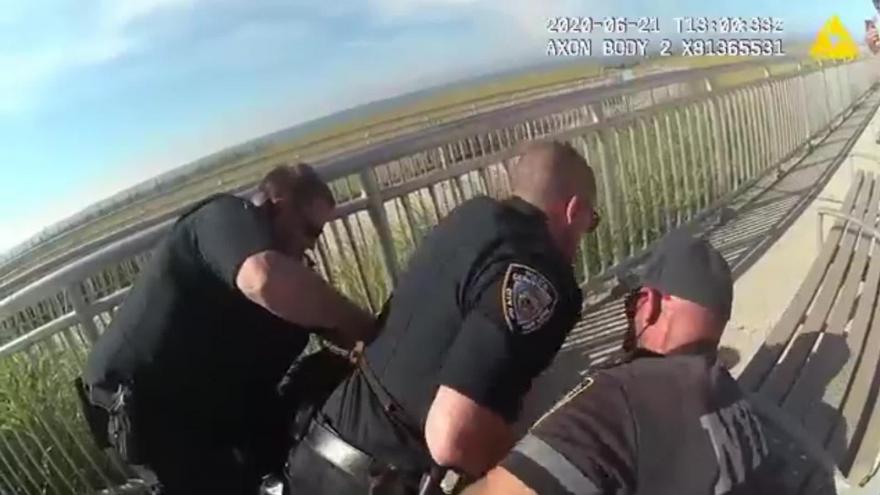 (CNN) -- Following a "swift" investigation by the New York Police Department's Internal Affairs Bureau, a police officer involved in a "disturbing apparent chokehold incident in Queens" has been suspended without pay, according to New York Police Commissioner Dermot Shea.

"While a full investigation is still underway, there is no question in my mind that this immediate action is necessary," Shea said Sunday.

The NYPD's Internal Affairs Bureau launched an active use of force investigation after video of an arrest surfaced on social media.

The man seen in the video was identified by his attorney as Richard "Ricky" Bellevue. His attorney, Lori Zeno, has called for the officer involved to be fired and prosecuted.

"I think she saw the unfairness uninvolved and I think she realized my client really didn't commit any crimes and in fact it was the officer," Zeno told CNN.

The video shows several officers affecting the arrest of Bellevue, with one in particular appearing to put him in a chokehold.

Another officer is observed tapping the back of the officer who had Bellevue in the apparent chokehold, and that officer appears to release his hold.

Body camera footage released by the NYPD shows the moments leading up to the incident.

According to a law enforcement source, the incident happened 8:45 a.m. Sunday morning on Rockaway Beach Queens boardwalk as police were responding to a disorderly group in the area.

Three men in particular are seen on camera making exchanges with police, sometimes in conversation, other times name calling and taunting.

At one point Bellevue approaches the officers and taunts them, saying "I'll throw sh*t in your face."

The law enforcement source described the man saying on camera "touch any of my boys and you'll be dead," parts of which can be heard on camera.

It's at this point one of the other men intervenes and says "stop," while a third man says you're just "givin' them a reason to beat our a**es."

One of the men has a cell phone on the police the whole time, continuing to taunt them and call them names, and shouting out the officers' names and badge numbers. He named one officer repeatedly and challenged the officer to "push" him again.

A few times the officers tell the individual that they are too close. At least one officer is observed wearing a mask, a requirement in the pandemic.

After about 10 minutes into the video, one man reaches down and pulls up a plastic bag. He then walks out of view of the camera and his friend asks him, "What are you doing?" Then the officers proceed to move in for arrest.

A scuffle ensues and the video shows several officers working to arrest Bellevue. From the view of the body camera an officer can be seen eventually removing his arm from Bellevue's neck.

"He's choking him," you hear from bystanders, even as officers are walking him to their vehicle. When asked by another bystander, an officer says, "He's not getting arrested, he's going to the hospital."

Eventually the suspect is seen walking in handcuffs with police.

Bellevue suffered a laceration and was taken to a nearby hospital, the source said, adding that he is still in custody and charges have not yet been announced or filed.

Katz, the Queens district attorney, said in a statement Sunday that her office is aware of the incident and that an investigation is underway.

"There must be zero tolerance for police misconduct. The District Attorney's Office is aware of the incident in Far Rockaway today. We take these allegations very seriously and an active investigation is underway," Katz said.

Zeno, Bellevue's attorney, has called for the officer involved to be fired. Zeno is also the executive director of the Queens Defenders.

She said the NYPD officer used a chokehold to strangle Bellevue until he was unconscious.

"This officer needs to be fired and prosecuted. He is the one who committed a crime in this circumstance," Zeno said.

Speaking to a crowd outside NYPD's 100th precinct Sunday, Zeno said officers approached her client "because he was kicking cans" and several officers "pounced" on him after he allegedly kicked a can to an officer.

She said her client also suffered a "big circle on the back of his head" where his hair came off, causing a bloody scalp.

Monday, Zeno said a staffer at the hospital Bellevue was taken to after his arrest told her he arrived unconscious.

"His hair and his skin on his scalp were just ripped off. It was a big round spot. Just blood, that's all you could see, all the skin was gone," Zeno told CNN.

She said Bellevue was finally released from custody on Monday afternoon and is recovering from his injuries.

The Civilian Complaint Review Board, the city agency charged with oversight of the NYPD, is also opening up an investigation, according to a city official.

The New York City Council last week passed a sweeping package of police reform bills, including an official ban on chokeholds. It has not been signed by the mayor.

A spokesperson for de Blasio's office said Sunday, "The video is very concerning. We're glad the NYPD is immediately launching an investigation to get to the bottom of what happened."

CNN is working to obtain permission to use the bystander video, which has been posted on social media by several people, including a councilman candidate.

CNN has reached out to the Police Benevolence Association, the NYPD's union.