NYPD officers arrest woman for allegedly striking officer after she did not wear face mask as required, authorities say 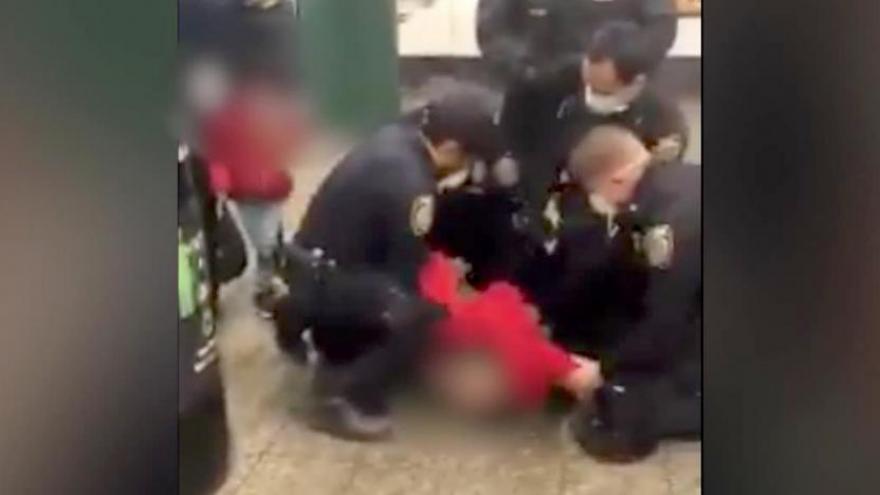 New York city police officers arrest a woman who refused to wear a mask in a subway station.

(CNN) -- New York police officers arrested a woman for allegedly striking an officer at a Brooklyn subway station this week after she did not wear a face mask as required, authorities said.

The woman, 22, was accompanied by a young child. A bystander captured the arrest on video, which took place on Wednesday.

"Where we see the greatest danger to lives in terms of the coronavirus and the area where we can enforce is around gatherings particularly large gatherings, so that's where we are going to focus," he said

The city will also continue to work with community partners to encourage and distribute face coverings, de Blasio said.

In the video, the woman is seen talking to officers on the steps inside a subway station. She has a mask around her neck, but not over her nose and mouth. She is escorted up the steps by several officers and you can hear raised voices on the video. She is briefly off camera before she appears to strike an officer and yells "do not touch me" after an officer reached out for her. She is taken to the ground as bystanders yell that she has a mask and her "child" is nearby.

The NYPD said in a statement that its officers approached the woman before her arrest and "politely informed her" that she could not enter the subway system without properly wearing a face mask.

Police said the woman "responded to the officers with vulgar language and repeatedly refused requests to properly wear her face covering over her nose and mouth" before the officers told her she would be escorted from the transit system for not complying.

The NYPD also said its officers told the woman, "Do not do this in front of your kid (ma'am)" before she waved her arms and allegedly struck an officer with her hand.

"As a result of these actions, she was taken into custody and placed under arrest. We are confident that the police officers in this incident acted appropriately and with respect. This individual was arrested only after her behavior toward officers warranted police action," the NYPD said.

CNN cannot confirm what happened before the start of the video.

The woman is facing possible charges of resisting arrest, disorderly conduct, and harassment and was given a notice to appear in court at a later date, the NYPD said.

De Blasio said during a news conference Thursday that the woman should not have been arrested.

"Whatever else was going on in that video ... we should never have a situation where a mom with her child ends up under arrest for that kind of offense," he said.

CNN has reached out to the woman at the center of the incident but has been unable to reach her. CNN cannot confirm that the woman is the child's mother.

Though the mayor said nobody should ignore the direction of police officers trying to keep people safe, he added that the incident "did not reflect our values, it did not reflect our goals in de-escalation, and we have to do better."

Gov. Andrew Cuomo mandated the use of face masks in public via an executive order on April 15. He said at the time that he was considering the use of civil penalties for those who break the rule.

The mayor and NYPD have already faced criticism for allegedly enforcing social distancing measure disproportionately. According to data released earlier this month, more than 80% of summonses were handed out to people of color.

Of the 374 summonses issued between March 16 and May 5 by the NYPD, 193 of those summonses were issued to black people and 111 to Hispanic people. More recent data is not yet available, according to the NYPD.

The statistics were made public following another video posted on social media showing plainclothes NYPD officers pushing a bystander to the ground after the officers tried to disperse a group of people not social distancing.