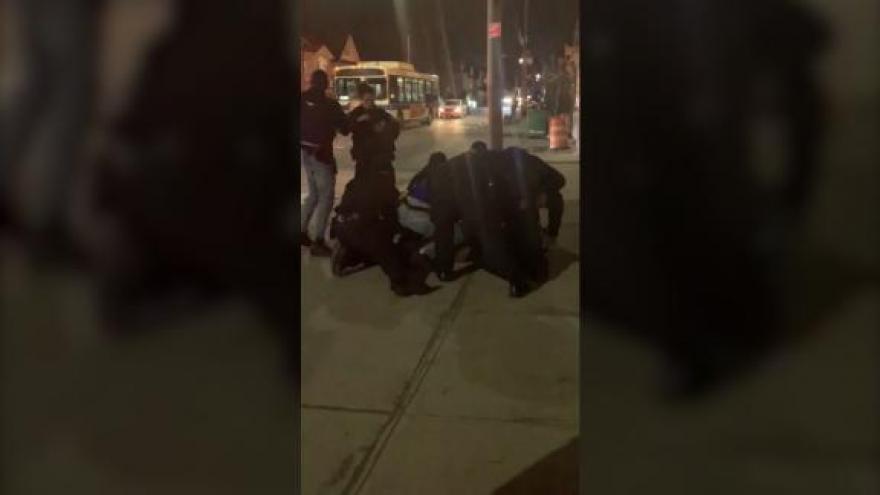 (CNN) -- The New York City Police Department launched an internal investigation after a video posted to social media showed at least eight officers arresting a 20-year-old man in Brooklyn, drawing criticism about the police's handling of the incident.

After the video hit social media, protests occurred outside the police precinct. The man was only charged with misdemeanors and a violation. His lawyer said he was not resisting arrest.

According to the NYPD, Fitzroy Gayle and another unidentified male were observed inside a Brooklyn park smoking a marijuana cigarette last Wednesday and fled the location when approached by police.

The two men ran in opposite directions and police ran after them.

In the video, Gayle is shown standing with his back against a wall as a plainclothes officer puts his hand on Gayle's chest. Gayle can be heard asking, "What did I do?" and "What crime did I commit?"

Gayle's hands are visible for a majority of the interaction, at some points held above his head, as the officer continues to keep him standing against the wall. After 90 seconds, several officers arrive, a scrum ensues and Gayle is taken to the ground. Someone is heard screaming, "I did not commit a crime."

The video shows at least eight officers holding Gayle down on the sidewalk at one point. He can be heard on video crying out "Help me," and "I am not resisting."

CNN has reached out to Gayle and his lawyer.

Gayle was arrested and charged with two misdemeanors - resisting arrest and obstruction of governmental administration in the second degree -- as well as a violation of unlawful possession of marijuana in the second degree, the NYPD said in a statement.

Shea said the other male was issued a summons and released. CNN has not obtained his name.

The officers involved in the incident have not had their duty status altered, NYPD Detective Sophia Mason said Friday

"This incident is currently under internal review," the NYPD statement said Friday.

Oren Yaniv, spokesperson for the Brooklyn District Attorney's office, told CNN, "We are aware of the concerns regarding this arrest and will be reviewing the incident."

While the video is difficult to make out details at times, Shea told reporters at a news conference Thursday it looks like an officer was standing on the male's ankle at one point.

Shea said officers in that precinct had earlier received a "shot spotter" alert indicating possible shots fired in the area.

There is nothing to indicate the men were in anyway tied to the "shot spotter" incident, Shea said. He added, " I certainly don't know that the officers didn't know that as they're arriving on that scene."

Shea did not name the individual arrested while speaking Thursday or say who posted the video, but the NYPD named Gayle in a release Friday and confirmed the content of the video to CNN.

"The end is what concerns me," Shea said in reference to the video. "I'd love to have a different outcome."

"We'll have to take a look at beginning to end any retraining needed or any other issues that may come up in the investigation."

Shea said based on preliminary information the male suffered an abrasion to his knee. He said he did not observe injuries from the neck up, based on photographs.

Mayor Bill de Blasio weighed in, saying at the same press conference, "I don't like what I saw, obviously it's not what we're trying to do here," but added, "We don't have all the facts, we need a full investigation."

New York state recently enacted a law that removes criminal penalties for possession of less than two ounces of marijuana.

Gayle's mother, Daphne, and others rallied outside the arresting precinct earlier this week, WCBS reported.

She and her son appeared on CNN affiliate WPIX, but he did not talk about the case. His mother invoked Eric Garner's name during the interview.

Garner died after being put in a chokehold by an NYPD officer who was later fired for his actions following a disciplinary trial. Garner's words "I can't breathe" became an outcry for protesters of excessive use of force by police.

"I look at the video and I saw my son, and it just reflects back what happened to Mr. Garner. It was like it's the same actual thing happened again," she said.

"And I was so frustrated ... My God, this is my son, this should not be happening."

"This is unacceptable, these are police officers out of control," said Sanford Rubenstein, Gayle's attorney. He said Gayle was not running away or resisting arrest.

Rubenstein said the District Attorney's office is going to do an independent investigation.

"Once that independent investigation is concluded, we want these officers not just fired but charged criminally for what they did," he said.

The Rev. Kevin McCall, National Action Network Crisis director, appearing with the Gayle's on WPIX Friday, said "these officers was out of control, they looked like they were coming from the zoo."

Rubenstien said the incident was "a case of stop and frisk gone bad."