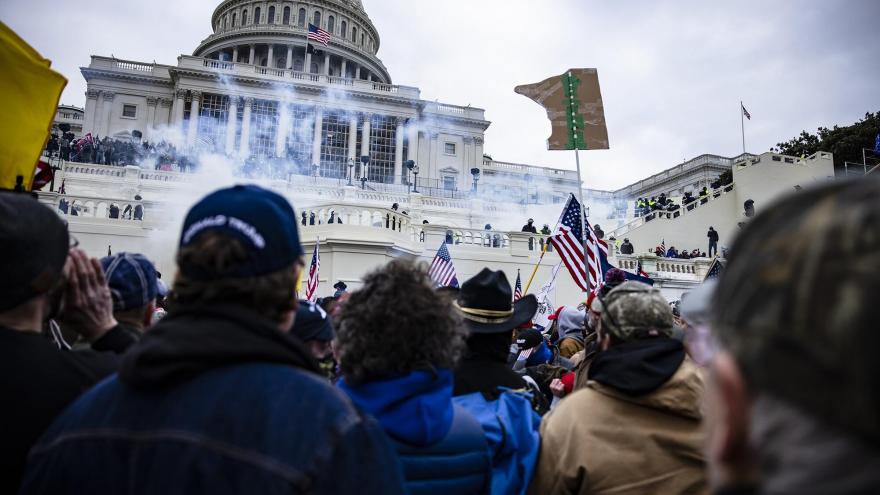 Pro-Trump supporters storm the US Capitol following a rally with President Donald Trump on January 6, 2021, in Washington, DC.

(CNN) -- A leader in an alleged Oath Keepers conspiracy in the US Capitol insurrection claims she was given a VIP pass to the pro-Trump rally on January 6, had met with Secret Service agents and was providing security for legislators and others, including in their march to the Capitol, according to a new court filing.

Attorneys for Ohio Oath Keeper Jessica Watkins detail how the efforts among paramilitants who are now accused of conspiracy on January 6 were closer to the apparatus around then-President Donald Trump and his rally than was previously known.

By sharing the new details in the filing Saturday, the defense attorney for Watkins, a former Army ranger who served in Afghanistan, argues for her release from jail on bond and other restrictions as she awaits trial.

"On January 5 and 6, Ms. Watkins was present not as an insurrectionist, but to provide security to the speakers at the rally, to provide escort for the legislators and others to march to the Capitol as directed by the then-President, and to safely escort protestors away from the Capitol to their vehicles and cars at the conclusion of the protest," the court filing said on Saturday. "She was given a VIP pass to the rally. She met with Secret Service agents. She was within 50 feet of the stage during the rally to provide security for the speakers. At the time the Capitol was breached, she was still at the sight of the initial rally where she had provided security."

The US Secret Service did not immediately respond Sunday to a request from CNN for comment.

Watkins is central to one of the most aggressive criminal conspiracy cases yet to emerge from the insurrection. The Justice Department indicted her and eight other alleged Oath Keepers on several charges related to the riot, including allegations that the group coordinated their travel to the pro-Trump event, discussed training and weapons beforehand, suited up in body armor and broke through the crowd heading into the Capitol in a military-style formation.

Watkins' attorney argued in the new filing she isn't alleged to have been violent in the melee, and that, though she is charged with aiding the destruction of property, didn't participate in vandalism and encouraged others not to as well. The court filing is the first meaty defense of the high-profile defendant in court.

Prosecutors previously said Watkins had waited for direction from Trump -- and believed she had received it before she joined the siege, allegedly leading several others into the Capitol building to fight against Congress' certification of the Electoral College vote.

Watkins' defense attorney, Michelle Peterson, wrote on Saturday that her client and other supporters of Trump had believed the then-President would invoke the Insurrection Act to use the military to overturn what he falsely said was the fraudulent election of Joe Biden. And Watkins and others believed "they would have a role if this were to happen," the filing said.

"However misguided, her intentions were not in any way related to an intention to overthrow the government, but to support what she believed to be the lawful government. She took an oath to support the Constitution and had no intention of violating that oath or of committing any violent acts."

Watkins' attorney argued in the filing her client had worn tactical gear potentially to defend herself, and walked up the Capitol steps with other Oath Keepers in a "stack" formation because the group may have wanted to stay together in the crowd.

The attorney also noted that Watkins now faces risks in jail, because of the coronavirus and because she is transgender.

She has been detained since her arrest in mid-January. The Justice Department is seeking to keep her in jail pending trial.