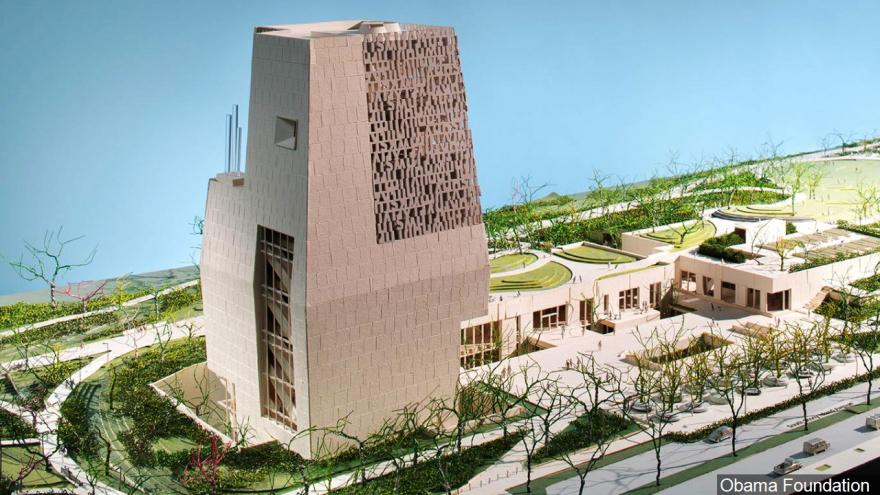 A model of the Obama Presidential Center, Photo Date: Undated
By WLS Staff

The $200 million of work being done will clear the way for construction to begin later in 2021.

Lightfoot said the city is investing in communities that need it through the project.

"Through the creation of jobs, infrastructure enhancements and more, these investments and economic developments will bring about the transformative change our Black and brown communities deserve," she said.

Through a community engagement process, the Chicago Department of Transportation has developed a plan to improve the safety and comfort for all modes of travel, with an emphasis on people walking and biking to and through Jackson Park, the mayor's office said. The plan will provide more and better-connected green space in Jackson Park by closing roadways, including Cornell Drive between Hayes Drive and 59th Street, and replacing them with park paths that connect to new wide, well-lit underpasses that eliminate the need to cross roadways such as Hayes Drive when moving through the park, city officials said.

"By creating new parkland and pedestrian underpasses, these mobility improvements will make it safer and easier to get around the park and ensure that you will be able to get where you need to go, even with increased future traffic demands," CDOT Commissioner Gia Biagi said.

CDOT will install a series of strategic safety and operational improvements by adding lanes on Lake Shore Drive and Stony Island Avenue, closing roads interior to the park (starting with South Midway Plaisance this summer), and providing spot improvements at existing bottlenecks. These improvements will include new and modified traffic signals, new crosswalks and accessible pedestrian signals to improve access to Jackson Park, and travel times will remain relatively unchanged once all improvements are complete. CDOT's construction work is anticipated to begin later this summer, starting with Lake Shore Drive.

The initial transportation improvements will be funded through a larger $174 million source of funds programmed by the state of Illinois.

The design also includes off-street trail and pedestrian underpasses improvements based on recommendations from the Streets for Cycling 2020 Plan to extend the existing network of trails in Jackson Park, providing ability to travel throughout Jackson Park on bike or foot on off-street trails that will go underneath street with wide well-lit underpass crossings.

The Chicago Park District will begin utility work and mitigation measures including a design process for the Midway Plaisance, as well as move forward with a new track and field facility at the corner of Stony Island Avenue and 63rd/Hayes. The new running track, opening summer 2021, will be constructed with a multi-use artificial turf field striped for soccer, football and lacrosse and newly installed sports lighting to allow for evening play.

The park district will also begin the design and community outreach process on several other projects in the South Lakefront Framework Plan including renovating the Iowa Building, relocating the Jackson Bark dog-friendly area and renovating the ball diamonds west of Cornell Drive.

The Departments of Housing and Planning and Development are implementing multiple community-driven resources to coordinate future private investment in areas near the future Obama Presidential Center.

The 2021 priorities include public engagement efforts to help develop design guidelines for new construction and to establish local priorities for the private redevelopment of city-owned land, especially along 63rd Street.

Additionally, the ordinance mandates affordability requirements on all rental and for-sale housing developed on city-owned residential land; and creates a Right of First Refusal Pilot Program that requires owners of buildings with 10 or more units to give tenants an exclusive opportunity to make an offer on the property prior to their sale, the mayor's office said.

The presidential library is moving forward after a four-year federal review and other delays, including concerns by activists that the center would displace South Side residents.

The center is expected to generate 700,000 annual visitors and more than $3 billion in economic development.

Last month, it was revealed that an excerpt from former President Barack Obama's "You are America" speech that marked the 50th anniversary of the Selma to Montgomery, Alabama march for voting rights will be carved into the exterior of the center.

In addition to the presidential museum, the campus will include a branch of the Chicago Public Library, a program, activity and athletic center, a children's play area and a fruit and vegetable garden.