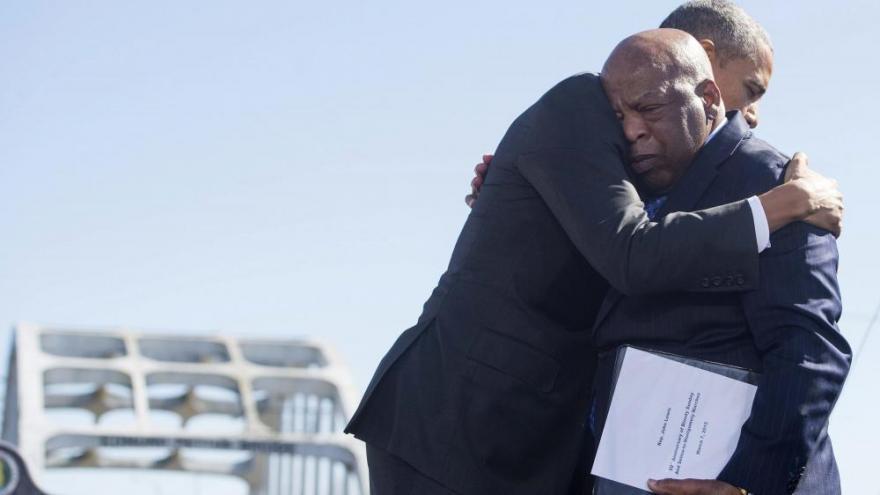 Former President Barack Obama will give the eulogy at US Rep. John Lewis' funeral and former Presidents Bill Clinton and George W. Bush will attend the service, according to sources familiar with the former presidents' plans.

(CNN) -- Former President Barack Obama will give the eulogy at US Rep. John Lewis' funeral on Thursday and former Presidents Bill Clinton and George W. Bush will attend the service, according to sources familiar with the former presidents' plans.

The sources added that Clinton and Bush will also participate in the funeral, which will be held Thursday morning at Ebenezer Baptist Church in Atlanta. The service marks the last day of a six-day memorial ceremony honoring Lewis. Obama's speech is set to take place around midday.

The news of the three former commanders in chief each having a role in the service comes the same day President Donald Trump avoided a final opportunity to pay an in-person tribute to the late civil rights icon at Joint Base Andrews.

Trump departed from the air base for Texas around 9:55 a.m. ET, about 30 minutes behind schedule after speaking to reporters at the White House. A procession with Lewis and his family arrived to Andrews a few minutes later, met by an honor guard.

The plane carrying Lewis' casket, along with separate aircraft for his family, departed following a brief ceremony. The two entourages did not overlap on the Andrews tarmac.

After days of commemoration and remembrances for the late civil rights leader, Trump made no mention of him as he left Washington.

Trump, however, made clear early that he wouldn't be joining in the remembrances.

"No I won't be going, no," Trump told reporters on Monday when asked whether he planned to pay his respects at the US Capitol, where Lewis was the first Black lawmaker to lie in state in the Capitol Rotunda.

Trump offered brief words of condolence on Twitter after Lewis' passing earlier this month and ordered flags lowered for a day. "Saddened to hear the news of civil rights hero John Lewis passing. Melania and I send our prayers to he and his family," Trump wrote at the time.

There are no plans for Trump to attend Lewis' funeral on Thursday.

Lewis and Trump's predecessor, however, were mutual admirers of each other, with Lewis having described Obama's 2009 inauguration as an "out-of-body" experience.

"When we were organizing voter-registration drives, going on the Freedom Rides, sitting in, coming here to Washington for the first time, getting arrested, going to jail, being beaten, I never thought -- I never dreamed -- of the possibility that an African American would one day be elected president of the United States," he said at the time.

In 2011, after more than 50 years on the front lines of the civil rights movement, Lewis received the nation's highest civilian honor, the Presidential Medal of Freedom, placed around his neck by America's first Black president.

Obama said in a statement following Lewis' death that the civil rights icon will "continue, even in his passing, to serve as a beacon" in America's journey towards a more perfect union.

"He loved this country so much that he risked his life and his blood so that it might live up to its promise. And through the decades, he not only gave all of himself to the cause of freedom and justice, but inspired generations that followed to try to live up to his example," Obama said.

"The Carters are not traveling these days but are sending their condolences in writing," Ellison wrote.

Carter, 95, issued a statement following the longtime Georgia congressman's death on July 17, saying that Lewis "made an indelible mark on history through his quest to make our nation more just" and "never shied away from what he called 'good trouble' to lead our nation on the path toward human and civil rights."