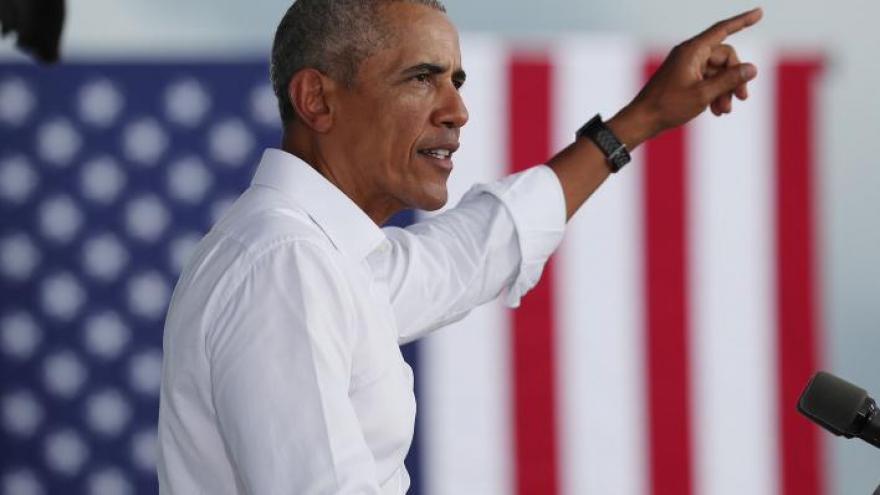 (CNN) -- Former President Barack Obama is set to join Democratic presidential nominee Joe Biden on the campaign trail in their first joint appearance during the final weekend of the election season.

The two will be in the key battleground state of Michigan on Saturday to "discuss bringing Americans together to address the crises facing the country," the Biden campaign announced Wednesday.

Obama has held three solo appearances over the past week campaigning for his former vice president, relishing his return to the campaign trail to help deliver a closing argument against his successor President Donald Trump.

The former president, who remains a popular figure in the Democratic Party, made his debut last week with a stump speech in Pennsylvania and delivered his most direct attack against Trump to date. He continued his campaigning over the weekend in Miami and on Tuesday in Orlando, as he zeroes in on a handful of critical battlegrounds where voting is underway.

In the home stretch of the election, Democrats hope Obama can help motivate Black men, Latinos and younger voters to turn out and vote for Biden and vice presidential nominee Kamala Harris.

State polls show Biden leading Trump in Michigan, a state that was part of the Democratic "blue wall" Trump smashed through to win the presidency in 2016. Biden and Obama's visit to the Great Lakes State could also help gin up support for Democratic Sen. Gary Peters, who's facing a tough reelection fight.

Former presidents traditionally avoid directly attacking their successors, but Obama, who's been a target of Trump since he left office nearly four years ago, has stepped up his criticism of the Republican President in recent days, hitting him on everything from his handling of the coronavirus pandemic, to his behavior in office and propensity to angry tweet, to his jobs record.

Trump on Tuesday appeared to be watching Obama's rally in Orlando.

"Now @FoxNews is playing Obama's no crowd, fake speech for Biden, a man he could barely endorse because he couldn't believe he won," Trump tweeted Tuesday, referring to Obama's decision to sit out the Democratic primary.

Obama, like Biden, has held drive-in rallies, instead of the typical campaign rallies that attract large packed crowds, due to the coronavirus pandemic.