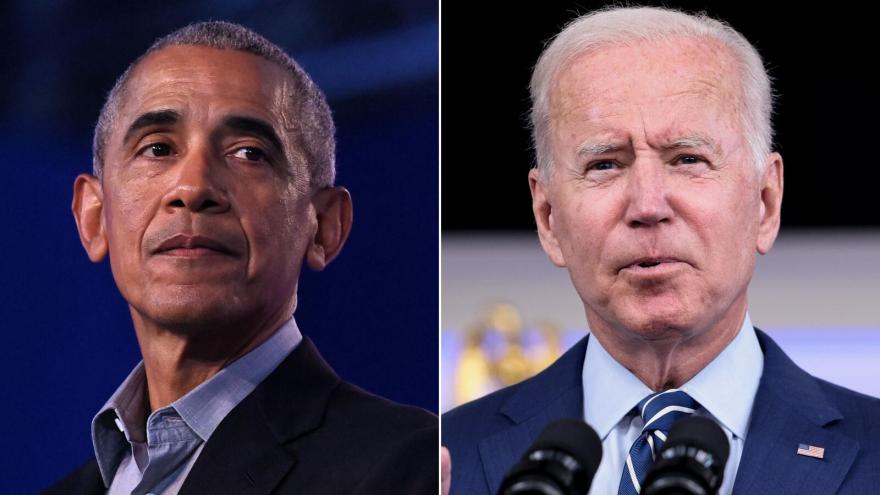 When former President Barack Obama walks into the White House on Tuesday, it will be his first time in the building since he welcomed then-President-elect Donald Trump for coffee on the morning of Trump's inauguration.

(CNN) -- When former President Barack Obama walks into the White House on Tuesday, it will be his first time in the building since he welcomed then-President-elect Donald Trump for coffee on the morning of Trump's inauguration.

That friendly greeting at the North Portico -- including the awkward handoff of a blue Tiffany's box the Trumps had brought as a gift -- couldn't foretell the acrimony that would lie ahead, as Trump shattered the relative amity that had once existed between former and current presidents.

Obama's return to the White House won't include any of that ugliness. Instead, he'll be celebrating one of his signature achievements, the Affordable Care Act, alongside the man who served with him in the building for eight years. President Joe Biden and Obama will announce steps the White House says will make health care more affordable, including closing a loophole that prevents millions of Americans from qualifying for subsidies.

Still, that it took more than a year for Biden to welcome his former boss to the White House reflects his desire to stake out a presidency of his own, even as the timing of the visit makes clear he is not opposed to seeking help as Democrats brace for a bruising midterm election season.

After two terms working in Obama's shadow, Biden has strived at moments to differentiate himself from his predecessor, most noticeably on foreign policy. And Obama has been cognizant of allowing Biden room to govern as his own man.

While Obama has occasionally spoken to Biden over the last year, their telephone conversations have been infrequent, according to people close to both men, and they have seen each other only a few times over the last 15 months -- despite Obama residing only 10 minutes away from the White House in Washington.

In public, each likes to play up a warm friendship that developed over Obama's presidency. Biden often slips a reference to "Barack" in his remarks, harkening back to a piece of advice or an inside joke they shared. Sometimes the results are somewhat pained: On "Best Friends Day" in 2019, Biden shared an image of friendship bracelets with "Joe" and "Barack" written in beads.

When Obama visits the White House on Tuesday, he'll join Biden for lunch in addition to attending the health care event in the Rose Garden. Obama and Biden had lunch together every week when they served in the White House.

"They are real friends, not just Washington friends," press secretary Jen Psaki said Monday. "I'm sure they will talk about events in the world as well as their families and personal lives."

She said it was "exactly the right time" for Obama to return to the White House after more than five years away.

Still, there have been limits to their friendship. Biden revealed last year that he had been invited into Obama's private residence only once over their eight years together in the White House. They have vastly different personalities and working styles. And their relationship has been colored by various slights, real or perceived, that still linger.

Obama declined to endorse Biden over other Democrats in the 2020 primary, a step both men insisted was necessary to allow a true contest within the party. Four years earlier, Obama had viewed Hillary Clinton as his Democratic successor instead of Biden, who decided not to run as he grappled with his son's death.

All that makes Tuesday's event a significant moment for each man. For Obama, it also marks the beginning of a string of public events, including a keynote speech on disinformation that he'll deliver at Stanford later this month.

His return to the White House is the first sign of what many Democrats hope will be his increased involvement in the 2022 midterm elections. The former President and former first lady Michelle Obama are two of the most sought-after party leaders -- expected to be in high demand by Senate and House candidates this year.

That could potentially stand in contrast to Biden, whose approval ratings remain near historic lows heading into campaign season. Biden is eager to campaign for Democrats in the coming year, but has also made known he is open to any role his party sees as helpful.

Obama is no stranger to uphill midterm battles; he endured losses in both 2010 and 2014. Yet he left office with an approval rating among the highest for any departing president, and remains popular among Democrats.

The Obamas have not yet determined how visible they intend to be in the fall campaign, but aides say they will both devote time to Democratic efforts to maintain control of the House and Senate.

The decision to have Obama appear alongside Biden at the White House this week was designed to shine a brighter light on one of the often-overlooked achievements of the Biden administration: strengthening the Affordable Care Act.

It's reminiscent of former President Bill Clinton coming to the White House to help explain the economic efforts employed by Obama during the fiscal crisis in the early years of his tenure. That appearance, in 2010, was remembered principally for Clinton holding court from the briefing room podium for half an hour -- long after Obama had exited the room.

The health care law remains one of the lasting legacies of the Obama administration. When it passed, Biden made one of his most infamous asides when he whispered to Obama that it was a "big f**king deal."

It's no small irony that the messy health care fight -- one of the central reasons Democrats lost control of Congress on Obama's watch more than a decade ago -- ended in a law now seen as broadly popular with Americans. Republicans have all but dropped their efforts to repeal and replace it after failing to do so for years.

Obama has remained engaged on the law since leaving office, taping videos encouraging Americans to enroll and breaking a near-silence on political issues to criticize Republicans for attempting to undermine it. He and Biden appeared in a video together last August encouraging Americans to sign up, one of their only joint appearances since Biden took office.

"We're going to get even more people covered in the years to come under your guidance," Obama told Biden in the video. "Love you, man."

Signing off, as Obama told Biden he was proud of him, the sitting President said to expect him to stay in touch.

"I'm still going to call you for advice," Biden said.

Obama's visit to the White House on Tuesday will not be his last.

Plans have been underway for months for the formal unveiling of his portrait -- a presidential rite of passage that was disrupted during the Trump administration and delayed during the first year of the Biden administration, when the Covid-19 pandemic limited such events at the White House.