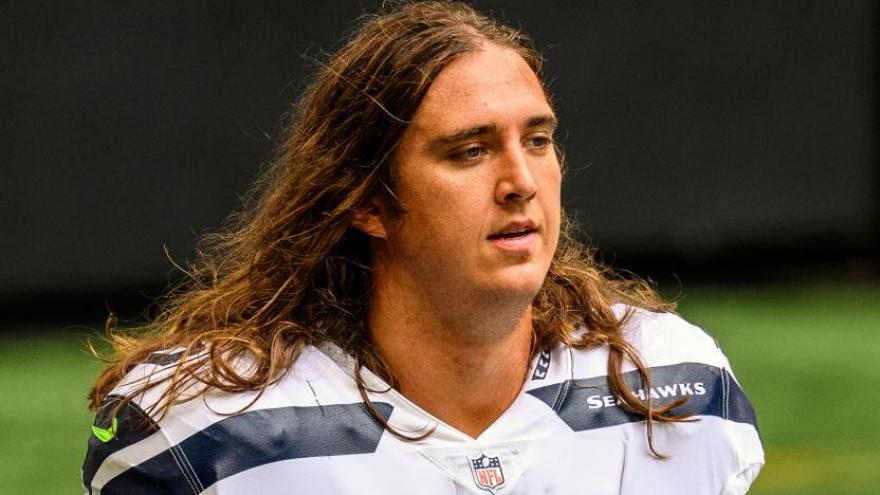 The Seattle Seahawks said offensive tackle Chad Wheeler is a free agent and no longer on the team.

(CNN) -- Now-former Seahawks player Chad Wheeler was arrested Friday on suspicion of felony domestic violence after an incident at a residence in a Seattle suburb, police and court records say.

The incident began at around 9:44 p.m. PT in Kent, Washington, according to Kent Police Department Assistant Chief Jarod Kasner.

According to court documents, prosecutors said "(Wheeler) viciously attacked the victim in her bedroom, strangling her at times with both hands." Wheeler is also accused of strangling the victim twice until she lost consciousness.

The victim texted friends, her family and Wheeler's father to call 911, according to the King County Prosecuting Attorney's Office and police officers who arrived forced entry after hearing her screaming inside. An officer attempted to use a Taser to subdue Wheeler "with little effect."

Wheeler, a third-year offensive lineman, wrote on Twitter that "events happened over the weekend that transpired from a manic episode."

Wheeler appeared Monday in court, where his bail was set at $400,000, according to court documents. The documents say Wheeler's father addressed the court, though the minutes of the hearing do not indicate what he said.

Wheeler was released on bail Tuesday morning, jail records show. He is prohibited from having contact with the woman, according to court records.

Wheeler's lawyers, Diego Vargas and Jon Scott Fox, told CNN in an email they are looking into the incident and "cannot comment until we have completed our investigation."

As the allegations involve domestic violence, and Wheeler's partner has not spoken publicly about the incident, CNN is not naming her at this time.

Wheeler tweeted he is "deeply sorry for the pain and suffering that I have caused" to his partner.

"The most important thing right now is that (she) gets the care she needs and I get help," he added. "Both are happening."

Wheeler also apologized "for the turmoil that I have caused to my family, teammates, fans and those closest to me" and said he is "truly ashamed."

"It is time for me to walk away from football and get the help I need to never again pose a threat to another," Wheeler said.

The Seattle Seahawks released a statement saying they "are saddened by the details emerging against Chad Wheeler and strongly condemn this act of domestic violence."

"Our thoughts and support are with the victim," the team added.

The Seahawks said in the statement that Wheeler is a free agent and no longer with the team. The NFL listed Wheeler on its waiver wire Wednesday.

A spokesman for the league told CNN they are aware of the matter, which will be reviewed under the personal conduct policy.

Wheeler was undrafted out of the University of Southern California and played for the New York Giants from 2017 to 2019, starting 19 of 27 games.

In the 2020 season, he played in five games for the Seahawks.