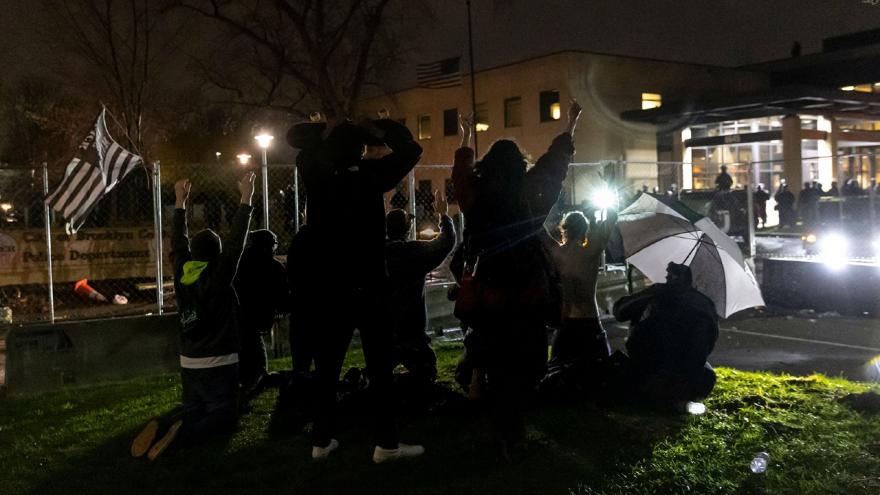 (CNN) -- The police officer accused of shooting and killing a Black man in a Minneapolis suburb during a traffic stop over the weekend -- a shooting her chief says was accidental -- has resigned, the suburb's mayor told CNN on Tuesday.

The resignation of Brooklyn Center police Officer Kim Potter comes after a second night of protests roiled the city, with hundreds of demonstrators expressing anger at Daunte Wright's death, some of whom clashed with police late Monday.

Earlier on Tuesday, Brooklyn Center Mayor Mike Elliott told "CBS This Morning" that the city was assessing its options about Potter's job, but he added, "I do believe that the officer should be fired."

Sunday's killing of Wright, 20, is at least the third high-profile death of a Black man during a police encounter in the Minneapolis area in the last five years, after the shooting of Philando Castile in Falcon Heights in 2016 and the death of George Floyd in Minneapolis last year.

Wright's death and Monday's release of video from the officer's body camera, have triggered raw emotion in Brooklyn Center, just 10 miles from where the trial of Derek Chauvin -- the former Minneapolis police officer accused of killing Floyd last year -- is taking place. The city's police chief has said the officer who shot Wright -- identified by state authorities as Potter -- appeared to mistake her gun for her Taser, and initially was placed on administrative leave.

Demonstrators Monday night gathered near the Brooklyn Center Police Department for the second night in a row, with shouts of "no justice, no peace" accompanying the din of conflict.

Police fired tear gas and stun guns to disperse demonstrators, who authorities said were defying a curfew. And protesters threw "bottles, fireworks, bricks and other projectiles at public safety officials," according to a tweet from Operation Safety Net, a joint effort of local agencies meant to ensure public safety during the Chauvin trial.

In addition to dispersing the demonstrators, authorities responded to multiple reports of break-ins and looting.

Elliott told CBS Tuesday he wants "everybody to stay home," but "we also are going to protect people's rights to gather peacefully."

"I can't accept that -- a mistake. That doesn't even sound right," he told ABC's "Good Morning America." He cited the officer's length of service -- authorities said she'd been with Brooklyn Center police for 26 years.

Wright's mother, Katie Wright, said she wanted to see the officer "held accountable for everything that she's taken from us."

"It should have never, ever escalated the way it did," Katie Wright told ABC.

The traffic stop that ended in Wright's death

Wright was with his girlfriend Sunday afternoon, driving to his older brother's house, when police pulled him over in Brooklyn Center over an expired tag, police said. Officers learned he had an outstanding warrant and tried to handcuff him while he was standing outside his car, police said.

It's not immediately clear what the warrant was for.

Wright's older brother, Damik Bryant, told CNN he texted Wright moments before the shooting, asking what was taking him so long. Wright sent another text saying he was pulled over and asked for insurance information, Bryant said. Bryant told him to call their mother.

"They asked him to step out the car, and you know his first instinct was, 'What did I do, what's wrong?' And they were like, 'Well, put the phone down, get out the car now, we'll talk to you about it when you get out,'" Bryant said.

"He said they pulled him over because he had air fresheners hanging from the rearview mirror," Wright's mother, Katie Wright, told CNN affiliate WCCO. "I heard the police officer come to the window and say, 'Put the phone down and get out of the car,' and Daunte said, 'Why?' And he said, 'We'll explain to you when you get out of the car,'" Katie Wright told CNN affiliate KARE.

Body camera footage released Monday shows Wright standing outside his vehicle with his arms behind his back and an officer directly behind him, trying to handcuff him. An officer tells Wright "don't," before Wright twists away and gets back into the driver's seat of the car.

Brooklyn Center Police Chief Tim Gannon said it appeared from the video that Wright was trying to leave.

The officer whose camera footage was released is heard warning the man she's going to use her Taser on him, before repeatedly shouting, "Taser! Taser! Taser!"

Then, the officer is heard screaming, "Holy sh*t! I just shot him."

Police chief says he believes officer meant to use Taser, not a gun

Gannon said he released the video for the sake of transparency.

"I felt the community needed to know what happened. They needed to see it. I needed to be transparent. And I want to be forthright," Gannon said.

Gannon said the portion of body-worn camera footage released Monday led him to believe the shooting was accidental and that the officer's actions before the shooting were consistent with the department's training on Tasers.

"As I watched the video and listened to the officer's commands, it is my belief that the officer had the intention to deploy their Taser, but instead shot Mr. Wright with a single bullet," Gannon said. "This appears to me, from what I've viewed and the officer's reaction and distress immediately after, that this was an accidental discharge that resulted in the tragic death of Mr. Wright."

Gannon said he has asked the Minnesota Bureau of Criminal Apprehension to investigate and present its findings, "independent of me," to authorities and attorneys to review the case.

The Minnesota Police and Peace Officers Association released a statement from its executive director saying the "tragic chain of events that resulted in the loss of life is weighing on all of us," and "no conclusions should be made until the investigation is complete."

"We're disappointed in recent comments about this incident from political leaders that fuel anger and hostility toward all law enforcement," the statement from Brian Peters reads. "We echo the many calls for protests to remain peaceful."

The district attorney for Hennepin County said the legal case will be handled by a different county to avoid an "appearance of a conflict of interest."

"They felt that it was a lack of leadership early on, in how things unfolded with the situation." Eliott told CNN's Don Lemon on Monday night.

Aunt: 'You don't mistake a stun gun from a gun'

"As Minneapolis and the rest of the country continue to deal with the tragic killing of George Floyd, now we must also mourn the loss of this young man and father," he said.

Another of the family's attorneys, Jeffrey Storms, told CNN on Tuesday that the chief's explanation -- that the shooting appeared to be an accident -- "is by no means proper or enough."

"You don't mistake a stun gun from a gun. ... If I made a mistake like that, I'll be in a jail cell; they'll be trying to put me under. That's not fair," Naisha Wright said.