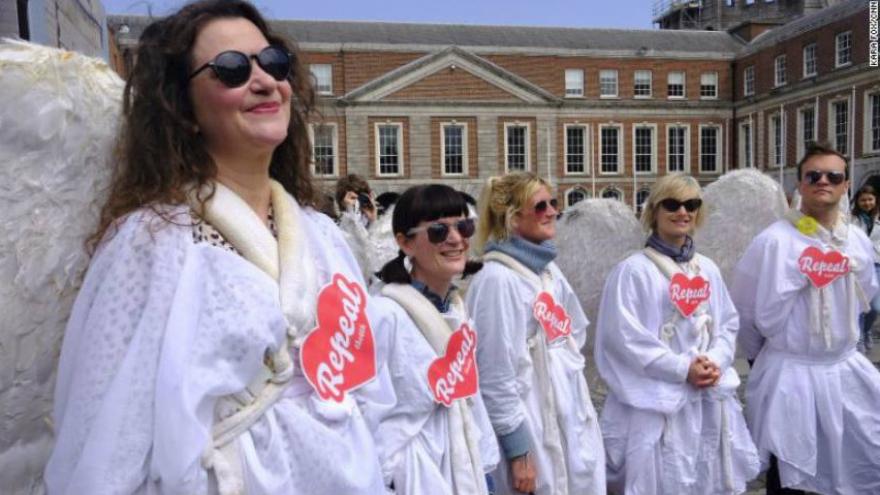 The decisive outcome of the landmark referendum held Friday exceeded expectations and was cast as a historic victory for women's rights. Polls had given the pro-repeal "yes" side a small lead, but suggested the contest would be close.

Since 1983, the now-repealed Eighth Amendment had forced women seeking to terminate pregnancies to go abroad for abortions, bear children conceived through rape or incest or take illegal measures at home.

As the final tally was announced showing over 66 percent of voters supported lifting the ban, crowds in the ancient courtyard of Dublin Castle began chanting "Savita! Savita!" in honor of Savita Halappanavar, a 31-year-old dentist who died of sepsis during a protracted miscarriage after being denied an abortion at a Galway hospital in 2012.

With exit polls showing a win for abortion rights campaigners, Prime Minister Leo Varadkar called the apparent victory the "culmination of a quiet revolution." Later, he hailed the momentous outcome as a victory for Ireland's future.

"I said in recent days that this was a once in a generation vote. Today I believe we have voted for the next generation," said Varadkar, who is Ireland's first openly gay leader as well as its first prime minister from an ethnic minority group.

The next battleground is likely to be Ireland's parliament, where the government led by Varadkar hopes to capitalize on the fresh momentum and enact legislation spelling out the conditions under which abortions will be legal for the first time by the end of this year.

The plan is to allow abortions during the first 12 weeks of pregnancy and in special cases after the first trimester, likely ending the trail of Irish women who go elsewhere mostly to neighboring Britain — by the thousands each year for abortions they can't get at home.

"Under the Eighth Amendment, the only thing we could say to women in this country was 'Take a flight or take a boat,'" Health Minister Simon Harris told Irish broadcaster RTE. "And now the country is saying, 'No, take our hands, we want to support you.'"

Some called for the new abortion legislation to be named, "Savita's law." Her father, Andanappa Yalagi, said he has "no words" to express his gratitude for Ireland's "yes" vote.

"We've got justice for Savita," he told the Hindustan Times. "What happened to her will not happen to any other family."

It is not yet clear how hard the soundly defeated "no" forces will fight for restrictive laws in parliament in light of the overwhelming appetite for reform.

Opponents of the repeal movement conceded defeat Saturday morning after exit polls from the night before suggested they had no hope of victory.

John McGuirk, spokesman for the Save the 8th group, told RTE that many Irish citizens would not recognize the country in which they were waking up. The group said on its website that the referendum was a "tragedy of historic proportions," but McGuirk said the vote must still be respected.

"You can still passionately believe that the decision of the people is wrong, as I happen to do, and accept it," he said.

The final tally showed that just over 66 percent of voters who cast valid ballots wanted the Eighth Amendment abolished. Exit polls indicated that both men and women strongly opposed the abortion ban, and that opposition to it was strong in rural areas, not just cosmopolitan Dublin.

The support for lifting the ban highlights the liberalization of traditionally Catholic Ireland, marking the diminishing influence of the Church hierarchy and a desire to align Irish secular laws with the other countries of Europe.

First it was same-sex marriage, approved here in 2015, and now it will be the consignment to history of the Eighth Amendment, which banned nearly all abortions and turned women seeking them into pariahs.

"This is a monumental day for women in Ireland," Orla O'Connor, co-director of the Together for Yes group, said. "This is about women taking their rightful place in Irish society, finally."

The vote is a "rejection of an Ireland that treated women as second-class citizens," she said, adding: "This is about women's equality and this day brings massive change, monumental change for women in Ireland, and there is no going back."

The mood was jubilant at Dublin's Intercontinental Hotel, where supporters of the Together For Yes group spent hours watching the vote tally come in from the country's 40 districts. In the end, 39 voted for repeal.

Some supporters had tears of joy running down their cheeks, and many women hugged each other. Cheers erupted every time partial results were shown on two big screens transmitting the latest television news.

When the final count was announced at Dublin Castle, more than 1,000 people were gathered outside singing, chanting and toasting each other with champagne despite an intermittent light rain.

They cheered when leaders of the "yes" campaign surfaced and they cheered for the prime minister when he arrived. For many, the victory was vindication after years of opposing the abortion ban, which required Irish authorities to defend the lives of a woman and a fetus as equals under the law from the moment of conception.

In practical terms, the amendment outlawed all abortions until 2014, when terminations in rare cases when a woman's life was at risk started being allowed.

Irish Minister for Children and Youth Affairs Katherine Zappone said she was deeply moved by the vote.

"I'm especially grateful to the women of Ireland who came forward to provide their personal testimony about the hard times that they endured, the stress and the trauma that they experienced because of the Eighth Amendment," she said.

There were roars of approval Saturday when two women leaders of the Sinn Fein party raised a sign that read, "The North is next."

Abortions approved by doctors are allowed in the rest of Britain until the 24th week of pregnancy, but not in Northern Ireland, where the procedure is limited to cases when a woman's life is at risk.

Ireland's prime minister noted that Saturday's win for legalizing abortion could not right past wrongs, but could prevent future ones.

"The wrenching pain of decades of mistreatment of Irish women cannot be unlived," Varadkar, who backed repeal, said. "However, today we have ensured that it does not have to be lived again."