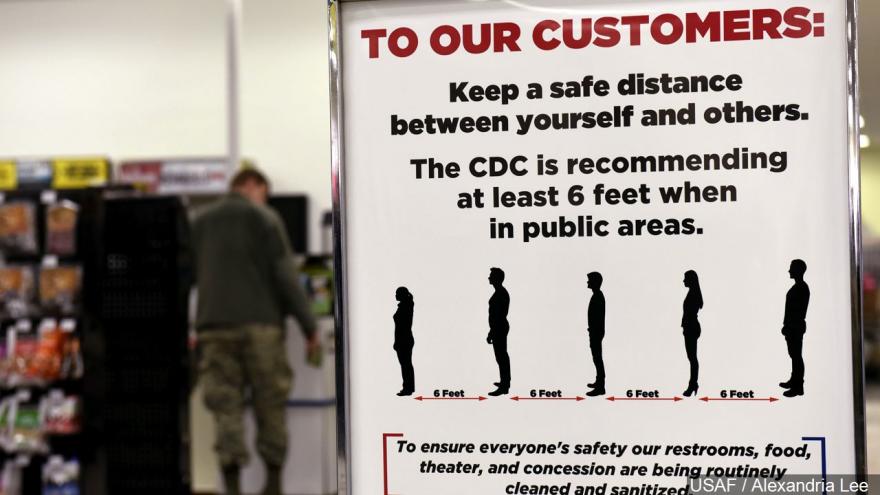 (CNN) -- As the US coronavirus death toll nears 11,000, health officials say parts of the country that leaned in heavily to social distancing measures may be seeing a slowdown in the growth of coronavirus cases.

The majority of people in the US are "doing the right thing" by staying home and following other mitigation measures to help fight the coronavirus pandemic, US Surgeon General Dr. Jerome Adams told ABC's "Good Morning America" on Tuesday.

"I'm seeing mitigation work," Adams said. "I know I've said it a couple times with Washington and with California. Their public health officials there should be applauded because they've given us the blueprint for how we deal with this and the rest of the country."

There are now at least 368,196 coronavirus cases, according to Johns Hopkins University's tally of cases in the US.

President Donald Trump warned Americans last week to prepare for a "painful" two weeks ahead as he extended nationwide distancing measures and acknowledged the severity of the virus.

Both Dr. Anthony Fauci, the country's leading health official and Dr. Deborah Birx, the White House coronavirus response coordinator, said Monday that with continued mitigation efforts, there is potential to lower the projected US death toll from100,000.

"I don't think anyone has ever mitigated the way I've seen people mitigate right now. It's never happened in this country before. I am optimistic. Always cautiously optimistic," Fauci said.

Meanwhile, an influential University of Washington model now predicts fewer people will die and fewer hospital beds will be needed, compared to its estimates from last week.

But it assumes social distancing measures -- like closing schools and business -- will continue until August.

The model predicts the virus may kill more than 81,000 people in the United States over the next four months, with just under 141,000 hospital beds being needed. That's about 12,000 fewer deaths -- and 121,000 fewer hospital beds -- than the model estimated on Thursday, the Institute for Health Metrics and Evaluation at the University of Washington School of Medicine says.

New York Gov. Andrew Cuomo said Monday the number of coronavirus deaths has been effectively flat for two days, adding that the "total number of hospitalizations are down, ICU admissions are down and the daily intubations are down. Those are all good signs and again would suggest a possible flattening of the curve," he said.

"But we get reckless," the governor warned, "we change, we're not compliant on social distancing, you will see those numbers go up again."

In Colorado, Gov. Jared Polis extended the state's stay-at-home order to April 26 and said the state was starting to "see progress" thanks to the measures.

The mayor, while calling the smaller rate of increase "good news," cautioned that the percentage of increase is usually lower on Mondaysthan other days of the week.

Health officials say the state's early aggressive measures gave California time to prepare for its peak in cases, which Gov. Gavin Newsom has said will likely come in May.

"The governor brought together experts to really try to understand if we flatten our curve, if we do all of this social distancing and stay at home how should we be thinking about what to prepare for, " California Lt. Gov. Eleni Kounalakis said Monday.

The growing number of cases, she said, are expected but come at a pace that has so far allowed the state to prepare.

"We have been expanding the capacity of our hospitals rapidly and so far we are able to handle the increase," she said. "But of course, for California and for all states around the country, it really is a race against time to have the equipment and supplies we need."

Track coronavirus cases in the US

States helping each other with supplies

To help states like hard-hit New York, California announced it was sending 500 ventilators to the US Strategic National Stockpile, which Trump previously said is nearly depleted.

"We still have a long road ahead of us in the Golden State -- and we're aggressively preparing for a surge -- but we can't turn our back on Americans whose lives depend on having a ventilator now," Newsom said in a statement.

The 500 machines were scheduled to leave California on a military aircraft Monday to be shipped to FEMA, which will then redistribute to other states based on need, Brian Ferguson with the California Office of Emergency Services told CNN.

"These ventilators are going to New York and other states hardest hit by this virus," Inslee said in a statement Sunday. The governor released 400 ventilators to the national stockpile.

"I've said many times over the last few weeks, we are in this together," he said. "This should guide all of our actions at an individual and state level in the coming days and weeks."

Meanwhile, as states employ more tests to identify carriers of the virus, data has begun to show African Americans make up a large number of victims in the country.

In Chicago, 72% of the people who have died from coronavirus are black, though they make up 30% of the population, officials said.

"This new data offers a deeply concerning glimpse into the spread of Covid-19 and is a stark reminder of the deep-seated issues which have long created disparate health impacts in communities across Chicago," Chicago Mayor Lori Lightfoot said.

The Lawyers' Committee for Civil Rights Under Law on Monday called for the federal government to release racial and ethnic data relating to the pandemic. The group says it wants to "ensure that communities of color receive equitable health care and treatment during this crisis."

In Louisiana, where nearly 33% of the population is African American, those residents account for 70% of the state's coronavirus deaths.

"We're going to try to figure out what that is attributable to and what we can do about that as quickly as possible," he said.