The rest of the partially collapsed Surfside condo has been demolished 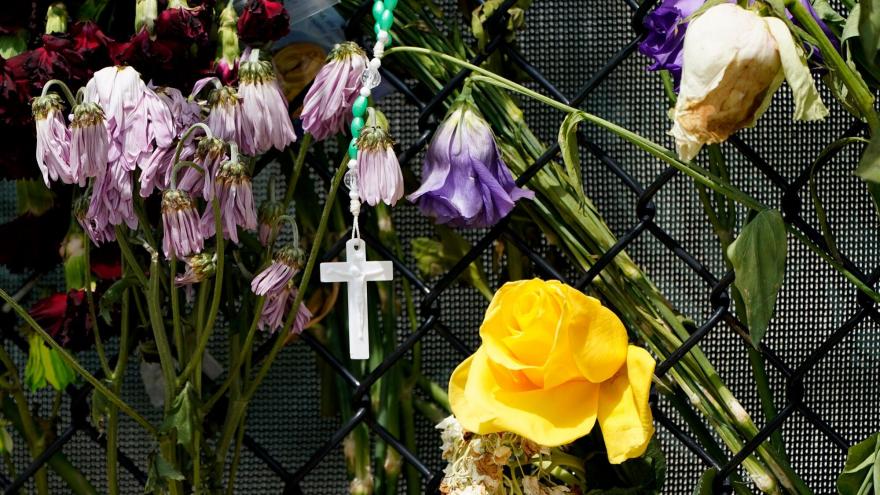 A cross hangs among wilting flowers at a makeshift memorial near the Champlain Towers South condo building.

Miami-Dade County Mayor Daniella Levine Cava told CNN in a briefing Sunday night that once the area has been deemed secure following the building's demolition, search and rescue teams will resume their efforts on the debris pile.

Search efforts at the partially collapsed building were paused Saturday around 4 p.m. so engineers could secure the site and prepare for the demolition, which officials said was crucial to allowing authorities to continue to look for survivors safely, eliminating the threat posed by the part of the structure that was still standing.

"As soon as the building is down and once the site is deemed secure, we will have our first responders back on the pile to immediately resume their work," Levine Cava said Sunday night.

She called the method of demolition "energetic felling," describing it as a process that "uses small, strategically placed explosives and relies on gravity to bring the building down in place."

The demolition was planned to be confined to the immediate area around the building, but nearby residents were asked to stay indoors as a precautionary measure, the mayor said, citing the dust and other particles that will be an "unavoidable byproduct" of the demolition.

Officials have been racing against Tropical Storm Elsa, which is tracking toward South Florida with heavy rain and sustained winds of 60 mph. The demolition team continued its preparations Sunday -- the 11th day since approximately 55 of the building's 136 units collapsed early June 24, killing at least 24 people. There are 121 people who remain unaccounted for.

Those who died include 4- and 10-year-old sisters, an elderly couple and the daughter of a firefighter.

Nicole Mejias told CNN on Saturday that five of her family members were in the Champlain Towers South building when it collapsed, including 7-year-old Stella Cattarossi, the daughter of the Miami firefighter. Cattarossi's body was found Thursday night.

"We just miss them so much already, we wish this tragedy didn't happen, and will always remember them," Mejias said.

Appearing on Sunday's "Face the Nation" on CBS, Surfside Mayor Charles Burkett underscored that authorities are still working with the mindset that this remains a rescue effort.

"It is absolutely not a recovery effort," Burkett said, later adding, "There is nobody in charge really talking about stopping this rescue effort. And this rescue effort, as far as I'm concerned, will go on until everybody is pulled out of that debris."

Burkett said at Sunday's briefing his team was tasked with altering their operational approach around the collapsed structure as Tropical Storm Elsa moved closer.

"It appears as though the approaching storm may have been a blessing in disguise for us in that it initiated the demolition discussion," he said.

Burkett said he hopes the demolition will eliminate a potentially dangerous threat to workers and possibly open up an estimated third of the remaining pile to search and rescue teams.

"We want to make sure that we control which way the building falls and not a hurricane, so all of this together I think ended up being a good thing," Burkett said.

Demolition plans and a race against the storm

Florida Gov. Ron DeSantis declared a state of emergency for 15 counties Saturday -- including Miami-Dade County -- because of Tropical Storm Elsa.

Elsa was a Category 1 hurricane Friday and early Saturday, but weakened to a tropical storm as it took aim at the Dominican Republic and Haiti. Forecasters say the storm's center will not directly impact Surfside, though the city could be affected by its outer bands, with wind gusts and rain starting in the area as early as Monday morning.

The potential for weather-related issues at the collapse site influenced authorities' decisions on the ground, and Levine Cava said Saturday officials were hopeful the demolition could be done before the area felt Elsa's impacts.

Plans to demolish the remaining portion of the building were announced late in the week as rescuers continued to scour the debris for victims.

Search and rescue operations were briefly suspended Thursday after engineers noted shifting on the debris pile that posed a danger to the rescue crews, officials said. After operations resumed later that day, authorities confirmed a demolition would likely be necessary to keep rescue crews and the collapse site safe for further searches.

Sunday, the condominium board for Champlain Towers East, a sister building of Champlain Towers South, suggested its residents evacuate ahead of the demolition, according to a letter from the condo association's board of directors obtained by CNN.

The letter said that while guidance had not been given yet, they were encouraging residents to evacuate in advance as streets nearby will be congested due to the demolition. They also asked residents to take their pets and valuables, including passports and valuable documents, with them.

"Our building foundation has been checked multiple times, but we make this suggestion in an abundance of caution," the letter said. "We do not expect any impact to us but you can't be too careful under the circumstances."

The firm Controlled Demolition, Inc. was tasked with the demolition of the remaining Champlain Towers South structure, Levine Cava said.

The governor expressed his support for the demolition plan ahead of Elsa's impact and said Saturday he believed it would be best for the building to be down before the storm arrives. "With these gusts potentially, it would create a really big hazard."

As for the survivors, the demolition could mean forfeiting not only their homes but also their possessions.

Those whose condos were not affected by the collapse had to evacuate without many of their belongings, leaving behind clothes, valuables and family photographs. But officials indicated it wasn't safe for them to go back inside to retrieve those items.

"At this time we're told that the building is unsafe. People are not going into the building," Levine Cava told CNN on Friday when asked whether survivors could collect their belongings. "I do not know how that could occur."

Asked Sunday whether families of the victims would be able to recover items that belonged to those they lost, such as their clothes, Miami-Dade Police Director Alfredo Ramirez III said homicide detectives had been "collecting items that are retrievable, and are logging them and documenting them at this time."

Any type of heirloom that is safe to retrieve is being documented to "be addressed at a later date with family members," he said.

Additionally, a system has been set up for family members to report property they are looking for, Ramirez said.

Officials have also done what they can to rescue any pets who might remain in the building ahead of the demolition.

Sunday night, Levine Cava said Miami Dade Fire Rescue personnel had carried out several sweeps of the premises, searching closets and under beds, along with using thermal imaging drones to locate any animals. The latest information officials had was that no animals were left inside.

"Those who were forced to evacuate the remaining portion of the building left their entire lives behind," Levine Cava said. "We know that. And we're deeply, deeply concerned and empathetic to how extraordinarily difficult this time is for them and their families."

Amid the investigation into what caused the collapse, the nearby city of Miami Beach ordered the evacuation of a three-story residential building Saturday evening out of an abundance of caution, according to city spokesperson Melissa Berthier.

The building is on Lenox Avenue and has 24 units, per Berthier. According to the city, 11 of the units are unoccupied and one person required housing assistance.

This is at least the second building ordered to be evacuated in Miami-Dade County since Champlain Towers South collapsed. Crestview Towers in North Miami Beach was evacuated Friday.

Berthier said Miami Beach fire teams responded to a service call Saturday about a vacant unit. When the city inspector arrived on the scene, he flagged a "flooring system failure in that unit and excessive deflection on an exterior wall."

The evaluation of the structural integrity of the building is ongoing, per Berthier.

Separately, the city of Surfside has asked the owners of buildings more than 30 years old and more than three stories tall to assess their properties for recertification in advance of their traditional 40-year deadline.

According to a memo obtained by CNN from a resident of the Champlain Towers East complex, Surfside building official James McGuinness asked those property owners -- especially those with structures on the ocean side of Collins Avenue -- to hire a Florida-registered geotechnical engineer to perform an analysis of the foundation and subsurface soils.

The memo reminds owners it's their responsibility to do these recertifications and regularly maintain buildings. It also calls for a written action plan in response within 30 days of receiving the memo.