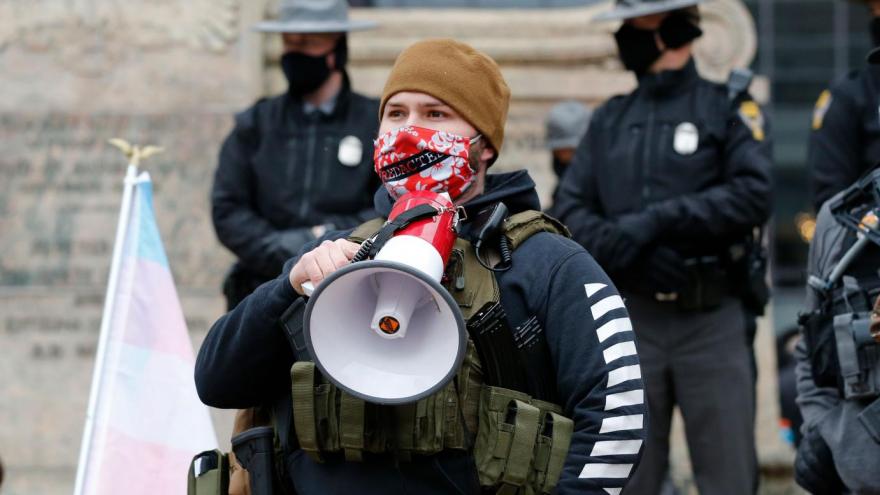 An armed protester stands on January 17 in front of state troopers outside the Ohio Statehouse in Columbus, Ohio.

(CNN) -- Dozens of armed demonstrators gathered at the state Capitol in Richmond, Virginia, on Monday as authorities remained on alert at capitols across the United States two days ahead of President-elect Joe Biden's inauguration.

Several demonstrators in Richmond identified themselves as members of the Proud Boys and Boogaloo groups as well as the Black Panthers. The demonstrations were part of the state's annual "Lobby Day," an event held in support of Second Amendment rights and hosted by the Virginia Citizens Defense League.

Car caravans originating from across the state of Virginia also converged on downtown Richmond. The Citizens Defense League, unable to obtain a permit to hold their yearly rally downtown, held the caravan instead.

The Richmond Police Department reminded demonstrators in a tweet Monday that the city has banned firearms at permitted events, which are events of 11 or more people that obstruct pedestrian or vehicular traffic.

The demonstrations came after a state of emergency was declared in Richmond ahead of anticipated protests at the state Capitol and Gov. Ralph Northam activated the National Guard in the wake of the deadly insurrection at the US Capitol.

Officials braced for potential unrest this weekend after an internal FBI bulletin warned that such demonstrations were being planned at all 50 state capitols through at least Wednesday.

But protests were largely small, with demonstrators -- some of whom were armed -- vastly outnumbered by police.

A light snow fell Sunday morning in Lansing, Michigan, but an estimated 75 demonstrators and 40 counterprotesters showed up at the Statehouse. Some carried firearms and wore body armor, but protests remained peaceful, officials said.

"We wanted to make sure what happened in Washington did not happen here in Michigan," Lt. Michael Shaw of Michigan State Police told CNN, "so we put a lot more security outside, a lot more visible security than normally would be there."

In Texas, about two dozen armed demonstrators gathered near the state Capitol in Austin, but they rallied in support of Second Amendment rights, the organizer said -- not in protest of the results of the presidential election.

In Denver, demonstrator Larry Woodall said he was disappointed by the low turnout of Sunday's protest. While he accepted that Biden will be inaugurated, Woodall said he wanted to show his support for Trump, suggesting he would vote for Trump in 2024 if he ran for president again.

"Donald Trump ain't a bad guy. He really isn't," Woodall told CNN, adding he was opposed to the violence seen this month at the US Capitol.

About a dozen people -- including some who held anti-Trump signs -- were at the Minnesota Capitol in St. Paul, which was surrounded by tall, heavy fencing. There were five armed people dressed in camouflage and carrying flags at the Oregon state Capitol in Salem who said they were anti-government libertarians who supported neither Trump nor Biden.

At Ohio's Statehouse in Columbus, a small group of protesters gathered next to a statue of President William McKinley amid a large police presence and metal barriers, CNN affiliate WSYX reported.

About 40 protesters gathered at the Statehouse in Columbia, South Carolina, for a rally over free speech after social media companies banned Trump, according to CNN affiliate WIS. The organizer of the event, Shawn Laurie, told WIS he didn't condone the riot at the US Capitol but felt he was being restricted on social media, hampering others from understanding who he really is.

Whatever crowds were present were just a fraction of the pro-Trump crowds that converged on Washington, DC, earlier this month, an incident that eventually swelled into a full-on riot and left five dead.

Many of Sunday's demonstrations were dwarfed by the ranks of police who stood guard to prevent a repeat of the Capitol riot.

Meanwhile, the Pentagon has authorized up to 25,000 National Guard troops for Inauguration Day -- an unusually large number, according to retired Army Lt. Gen. Mark Hertling, a CNN military analyst.

The deployment of 25,000 troops is about twice the number of National Guard members normally involved in the inauguration, Hertling said.

"It certainly is somewhat like a combat zone," he said.

The rehearsal for the inauguration ceremony was delayed until Monday amid heightened security concerns, acting Homeland Security Deputy Secretary Ken Cuccinelli said, citing "online chatter" about the previously scheduled rehearsal day of Sunday. But he said there are "no specific credible threats."

Guests of members of Congress will not be required to undergo security background checks this year, multiple sources told CNN on Monday. Guests ordinarily do not have background checks for events such as the inauguration because those guests tend to be spouses of members and other security measures are in place.

"In order to maintain critical operational security surrounding the 59th Presidential Inauguration, the U.S. Secret Service and our law enforcement partners will not be commenting on the means and methods used to conduct the agency mission, inclusive of protective intelligence matters," US Secret Service spokesperson Justine Whelan told CNN in a statement.

The bulletin warned that the government "may use deadly force" against any aircraft that's determined to pose an "imminent security threat."

Many of the capital's monuments and buildings are inaccessible, including the National Mall, which will be closed through at least Thursday. The iconic lawn stretching from the Capitol to the White House, typically a viewing area for presidential inaugurations, was deserted Sunday -- something National Park Service spokesman Mike Litterst told CNN was "unprecedented, almost surreal."

"But it is being done," he said, "to guarantee that the constitutional mandate of a peaceful transfer of power on January 20 takes place."

'I encourage you to stay home'

State leaders ramped up security around their capitol grounds in recent days -- pulling in National Guard members for help, erecting barriers, boarding up windows, asking residents to avoid the areas and some even closing down capitol grounds altogether.

"It's pretty clear that the (US) Capitol itself is locked down about as tight as humanly possible," former FBI Deputy Director Andrew McCabe said Sunday, adding it was hard to imagine a reprise of the Capitol riots taking place there in the next several days, given the security measures in place.

"But," he added, "we have 50 state capitols around the country that are not nearly as protected as our national Capitol, and those are the places that I fear smaller pockets of this sort of violence could really flare up."

Minnesota officials told CNN they would "continue to assess potential threats" to their state Capitol, though Bruce Gordon, spokesman for the Department of Public Safety, said there were no current credible threats.

Protests there were quiet Sunday, but Gordon said officials would "enhance" their response and "change tactics as needed" in the coming days.

Texas will keep its state Capitol and its grounds closed through Wednesday, officials said, adding they were aware of "violent extremists who may seek to exploit constitutionally protected events to conduct criminal acts."

Columbia, South Carolina, officials have similarly advised residents to stay home and stay away from the city center.

"Unless there's a need, this weekend and certainly on Inauguration Day, to be downtown," Mayor Stephen Benjamin said, "I encourage you to stay home."

Maryland Gov. Larry Hogan on Friday declared a state of emergency in connection with Biden's inauguration, allowing state officials to efficiently coordinate resources to help local jurisdictions and nearby states.

"The State of Maryland will continue to do everything we possibly can to secure our nation's capital," Hogan said, "and to ensure the peaceful transition of power."