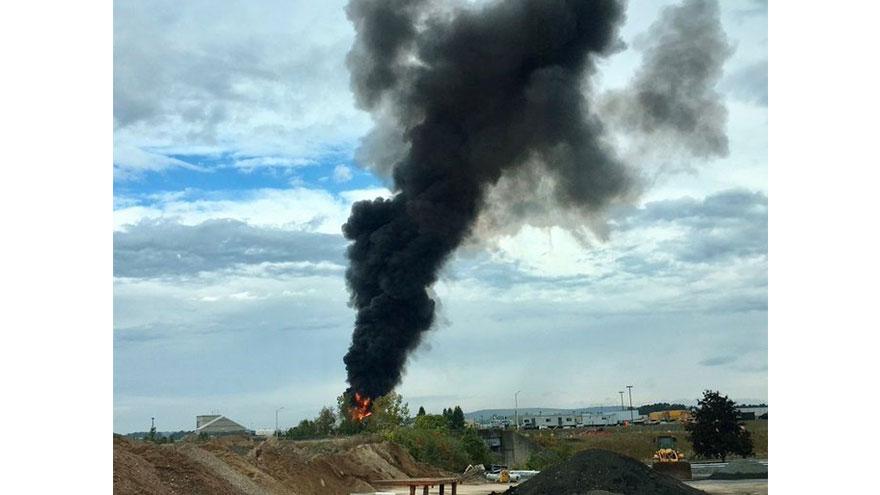 (CNN) -- Seven people are dead after a World War II-era B-17 bomber crashed into an airport de-icing facility while trying to land at Bradley International Airport in Connecticut, officials said.

The seven were on the plane, James Rovella, commissioner of the Department of Emergency Services and Public Protection, said at a news conference Wednesday evening.

Six people on the plane survived. Rovella said he couldn't give names of the victims because not every family has been notified.

Thirteen people -- 10 passengers and three crew members -- were on board when the vintage Boeing B-17 Flying Fortress crashed at the end of a runway, authorities said. One person on the ground was injured, Rovella said.

Two firefighters were on board the plane, Simsbury Volunteer Fire Company Deputy Chief Kevin Kowalski said earlier. Kowalski would not provide names of the firefighters nor details on their conditions.

The aircraft is civilian-registered and was not flown by the military at the time of the crash, the Federal Aviation Administration said.

Pilot asked to return to the airport, audio indicates

The B-17 waited a few minutes for turbulence from a prior aircraft to clear before it was cleared for takeoff, according to FAA air traffic control audio recorded by the website LiveATC.net.

But shortly after takeoff, the pilot told air traffic control: "N93012 would like to return to the field."

"What is the reason for coming back?" the controller asked.

"You got No. 4 engine. We'd like to return, and blow it out," another pilot in the aircraft said.

A pilot said he needed to land immediately, and the control tower diverted other jets that were about to land, the recording indicates.

After the B-17 crashed at the end of a runway, a plume of black smoke billowed from the scene.

Jennifer Homendy of the National Transportation Safety Board said the plane hit the instrument landing system posts and veered to the right. It crossed a grassy area then a taxiway and ran into the de-icing facility.

The state health department advised the public not to come into contact with firefighting foam they may find on the Farmington River or its banks. It also advised against fishing in the river.

The Department of Energy & Environmental Protection was using booms to contain foam and leaked fuel in the brook by the airport.

Plane belonged to a nonprofit that restores aircraft

A "Wings of Freedom Tour," featuring the B-17 and other aircraft, was scheduled to take place through Thursday, the foundation said on its website.

Attendees can purchase various experiences aboard the featured aircraft, including flights, the website says.

The Collings Foundation said it's "forever grateful to the heroic efforts of the first responders at Bradley."

"Our thoughts and prayers are with those who were on that flight," the foundation said in a statement to CNN.

"The Collings Foundation flight team is fully cooperating with officials to determine the cause of the crash of the B-17 Flying Fortress and will comment further when details become known."

The foundation is a 40-year-old educational nonprofit that organizes and supports "'living history' events and the preservation, exhibition and interaction of historical artifacts that help Americans learn more about their heritage," according to its website.

It counts the Wings of Freedom Tour as a "major focus" of its endeavors, the site states.

While about 13,000 rolled off the assembly line, only a handful of the Flying Fortresses still take to the air, usually for air shows and special events. These are the famous workhorse bombers that helped the Allies win World War II.

The airport is in Windsor Locks, about a 15-mile drive north of Hartford. It reopened about three hours after the crash.

Correction: This story has been updated with James Rovella's correct title.