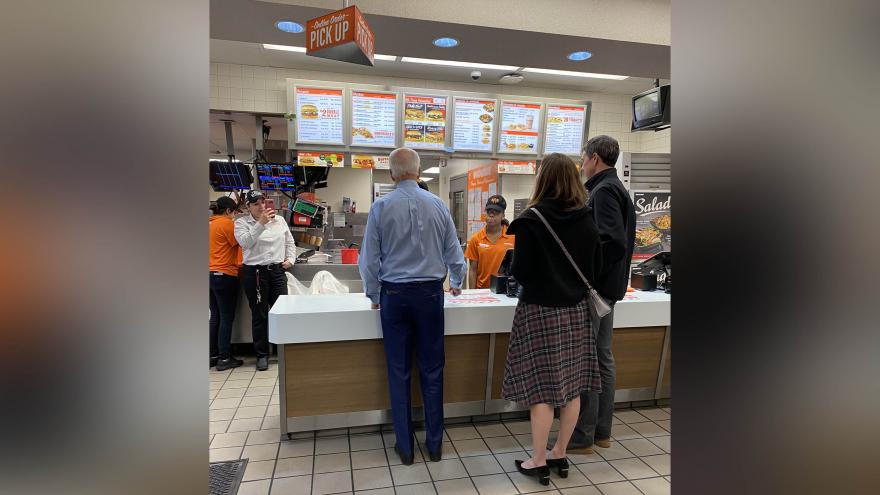 Joe Biden was already having the greatest day of his campaign. Then he went to Whataburger. Credit: Arlette Saenz/CNN
By Dan Merica and Eric Bradner, CNN

(CNN) -- Joe Biden was already having the greatest day of his campaign.

Then he went to Whataburger.

After endorsing the former vice president on stage at a rally in Dallas, former Texas Rep. Beto O'Rourke took Biden to a nearby Whataburger, the iconic Texas fast food chain that became synonymous with O'Rourke's 2018 Senate campaign.

"I am going to treat Joe and Jill right," O'Rourke said during the rally. "We are going to take them to a world class meal tonight -- there is a Whataburger less than half a mile from here."

Biden loved the idea. "I'm going to Whataburger right now," he exclaimed as he closed out the event.

Few in the audience actually believed the line. But minutes after leaving the stage, the duo -- joined by O'Rourke's wife Amy -- sauntered into the brightly lit burger joint much to the surprise of some patrons.

"Hey, folks. How are you?" Biden said as patrons squealed.

"This is the coolest Whataburger experience I have ever had," said one diner as Biden and O'Rourke worked the room.

Biden and O'Rourke shook nearly every hand in the building before they ambled up to the counter to order.

Everyone got fries. Biden got a milkshake.

And the former vice president paid with cash.

O'Rourke's endorsement was an unexpected addition to an already strong day for Biden, who also received the backing of former South Bend, Indiana, Mayor Pete Buttigieg and Minnesota Sen. Amy Klobuchar on Tuesday, after both dropped out of the presidential race.

"Ladies and gentlemen, tomorrow, March 3, 2020, I will be casting my ballot for Joe Biden," O'Rourke told the audience at the rally before the Whataburger trip. He called President Donald Trump an "existential threat" and contrast him with Biden, who he called "decent, kind, caring and empathetic."

That caring was on display when, shortly after their food arrived, a 7-year old girl named Sophia walked over to the table with two blank white pieces of paper and a pen.

Sofia, who lives in Broken Bow, Oklahoma, but traveled to Dallas because his brother wanted to attend the Biden rally, asked for an autograph.

"How do you spell your name," Biden asked, before writing out a note.

"You are a lovely, bright, young lady -- going on to third grade," Biden wrote. "Be good."

O'Rourke then took the other piece of paper.

"It was wonderful to meet you! I'm expecting great things from you," he wrote, signing the note "Beto."

Much of the moment was caught on camera -- by some of the reporters who attended the late-night dinner, but also by a O'Rourke aide who streamed much of the meal on Facebook Live, another callback to O'Rourke's 2018 campaign and failed 2020 presidential bid.

"Mr. Vice President, would you mind if we just said hello to our folks who are watching on Facebook Live," O'Rourke added, before Biden joined in the narration of their day.

Before leaving, Biden took a shirt from an O'Rourke fan who was there that had the name of the former congressman's political action committee, "Powered by People," on the back. He put it on.

In an interview with CNN after the stop at Whataburger, O'Rourke said he decided he was voting for Biden late last week after seeing a clip of Biden taking a question in Charleston, South Carolina, from a pastor who'd lost his wife in the 2015 church shooting there.

O'Rourke was traveling at the time he saw the clip -- he's been campaigning for Texas state legislative candidates -- and said he saw the clip and sent it to his wife, Amy, saying he thought Biden was "the guy for us."

"I just was struck by his ability to connect with that one person, and then with all of us, simultaneously," O'Rourke said. "I feel that's what this country needs. We need to heal after a very divided time. We need to come together, and we need someone who can speak to us in that way and lead in that way."

O'Rourke described the decision to support Biden as "a huge relief."

"And then this weekend I was talking to my oldest son, Ulysses, and told him I was going to vote for Biden," he said. "And he said, 'Well, you should endorse him.' And I said, 'OK, that makes sense.' He said, 'If you want this guy to win, you should do everything you can to help him.'"

O'Rourke told Biden about how his son had pushed him to endorse the former vice president, too.

So Biden called Ulysses and left a message.

"I'm calling Ulysses," Biden said with a smile as a clearly proud O'Rourke looked on.

"Ulysses, this is Joe Biden. You are good boy because you are not answering the phone, which means you should be in bed, and I am glad you are," Biden said. "I just wanted to thank you. Thanks for getting your dad to endorse me, and I am looking forward to meeting you buddy."