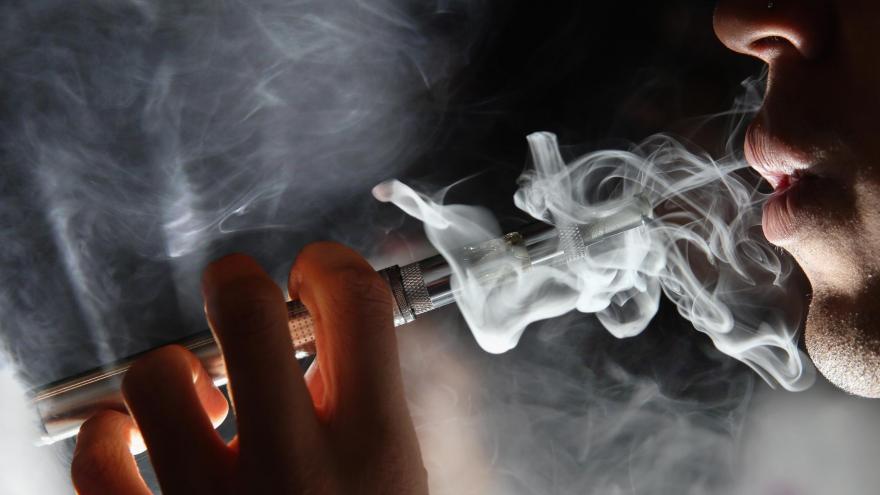 (CNN) -- Another state has announced plans to work toward banning the sale of certain e-cigarette products.

Ohio Gov. Mike DeWine on Tuesday called for a statewide ban on the sale of flavored vaping products, including mint and menthol. The ban will not include tobacco-flavored products, according to the governor's office.

"Today I'm specifically asking the members of the General Assembly to continue our work together to protect Ohio's children from addiction by banning flavored e-cigarette products, including menthol and mint," DeWine said during a press conference on Tuesday.

The governor "is seeking legislation to enact a permanent ban on flavored e-cigarette products," according to his office.

Yet "we're not asking for a complete ban," he said during the press conference, as people who vape will still have the option of tobacco-flavored products.

"Young people are using the flavors to a very, very high percentage, so if we can eliminate the flavors, we think we can make some progress in regard to young people," DeWine said. "The flavors are what's driving, to a great extent, the use of this product among young people."

The announcement comes as the United States continues to face an outbreak of lung injuries tied to using e-cigarette products.

The Ohio Department of Health has reported 22 confirmed hospitalizations due to vaping-related lung illnesses among people ages 15 to 59.

Nationwide, there have been 805 vaping-related lung injury cases reported to the US Centers for Disease Control and Prevention.

Sixteen deaths have been identified nationwide as part of the multistate outbreak of lung injury associated with vaping: two in California, two in Kansas, two in Oregon, and one each from Illinois, Indiana, Minnesota, Missouri, Florida, Georgia, Mississippi, Nebraska, Virginia and New Jersey.

Other states have taken action to prohibit the sale of certain vaping projects.

Last week, Washington Gov. Jay Inslee called for the state to impose an emergency ban on all flavored vaping products, including those that contain nicotine and THC.

Also last week, Massachusetts Gov. Charlie Baker called for a four-month statewide ban on the sale of both flavored and non-flavored e-cigarettes and vaping products.

The CDC, US Food and Drug Administration, state and local health departments, and other clinical and public health partners are continuing to investigate the multistate outbreak of lung injury associated with using e-cigarette products.