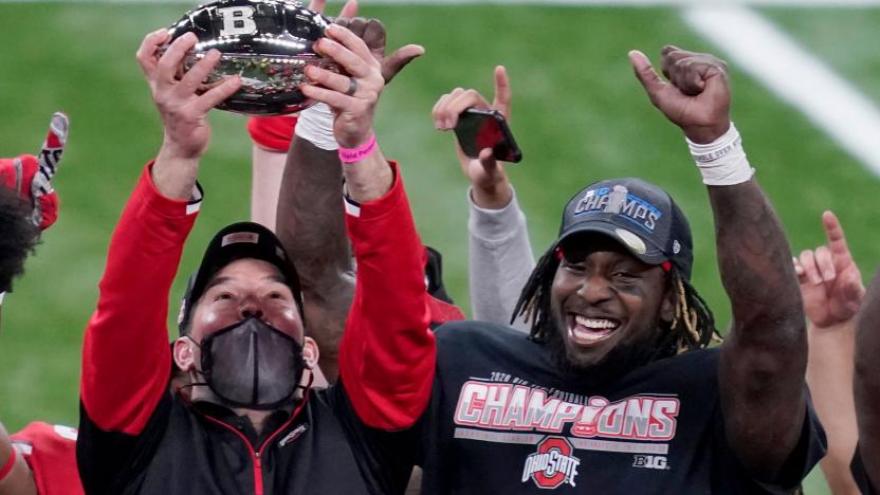 (CNN) -- After a regular season replete with stops, starts and multiple schedule changes, the College Football Playoff picture is coming into focus.

Saturday concludes the conference championship schedule -- in addition to other regular-season games. Entering the day, Alabama, Notre Dame, Clemson and Ohio State held the top four spots -- in that order -- in the College Football Playoff rankings, with Texas A&M in fifth.

The top five has been unchanged since the College Football Playoff committee began releasing its weekly rankings on November 24.

The committee will release its four-team playoff selections on Sunday (two weeks later than originally planned), with the playoff semifinals scheduled for New Year's Day and the championship game on January 11.

But even if the top four teams end up being familiar, this has been far from a typical season, as the pandemic turned the sport, like so many other things, seemingly upside down.

What will this latest College Football Playoff look like during a pandemic? After selection day, if one of the four teams is unable to play because of Covid-19 concerns, that team would not be replaced, CFP executive director Bill Hancock told ESPN last month.

"Covid has changed all of our lives, but it hasn't changed our protocol at the CFP," College Football Playoff selection committee chair Gary Barta said November 24. "We take a look at each team's win/loss record. We look at the strength of schedule head-to-head, games played with common opponents, and eventually we'll look at those who become conference champions."

This season, the committee will rate teams that played as few as six games and as many as 11 -- with conferences like the Big Ten starting the season in late October and Pac-12 in early November. The Big 12, Southeastern Conference and Atlantic Coast Conference started in September.

Did No. 4 Ohio State do enough?

One of those teams who only played six games is Ohio State. Down 22 players on Saturday, the Buckeyes came from behind to defeat No. 14 Northwestern 22-10 to win the Big Ten title.

At 6-0, Ohio State, one of many programs experiencing Covid-19 problems this season, had to cancel its game against Illinois earlier this season, while two other schools (Maryland and Michigan) had to cancel against the Buckeyes because of their own Covid-19 concerns.

"I'm not going to talk about other teams because I think we have enough to talk about positively about our program," Ohio State head coach Ryan Day said to reporters Saturday. "But I'll say this: If we have an opportunity to play anybody in the country in one game, I'm going to take the Ohio State Buckeyes. I feel strongly about this team. We're made of unbelievable character, and they've been through so much."

Currently on the outside looking in is Texas A&M (8-1), whose lone loss was to Alabama, 52-24. That loss kept the Aggies from reaching the SEC championship game -- a key component for the committee. Top-ranked Alabama (10-0) faces No. 7 Florida (8-2) in the SEC title game on Saturday night.

"Seven straight SEC wins," Texas A&M head coach Jimbo Fisher said, stating his case after his team defeated Tennessee 34-13 on Saturday. "Some schools ain't even played in seven games. Win seven in a row in the SEC and win eight overall. I don't care what league you're in. I don't care what anybody else says. If you want to pick the best four teams, we're one of them."

Potentially half of the playoff field, meanwhile, may have played in the ACC title game between Clemson and Notre Dame.

Prior to the contest, Clemson's only loss was in double overtime on the road against the Fighting Irish -- and that was when Tigers quarterback Trevor Lawrence was sidelined because of Covid-19 protocol.

Despite the loss, Notre Dame head coach Brian Kelly pointed to his team's resume as the path to a playoff berth. Known for its longtime independent status, Notre Dame joined the ACC for this football season during the pandemic.

"We've played 11 games," Kelly said. "That matters. Playing 11 games, testing your team week in and week out, I think that puts us without question as one of the top four teams in the country."

Could the Rose Bowl be held outside of California?

The playoff semifinals are scheduled to take place at the Rose Bowl in Pasadena, California, and the Sugar Bowl in New Orleans, Louisiana. But with California's latest restrictions, using the iconic Rose Bowl site could be in jeopardy.

Speaking to reporters Tuesday, Hancock said that the hope is the state will let families attend at the Rose Bowl. Hancock didn't give a timetable on when a decision would need to be made to potentially move that semifinal elsewhere if families aren't permitted.

"Given the realities of 2020, we always reserve the right to make decisions as late as possible," Hancock said. "For example, what happens if the state of California shuts down entirely and doesn't allow any games? So, we're keeping our eye on the situation, but we are planning to play that semifinal at the Rose Bowl."

Could a team potentially decline a playoff spot if families aren't allowed to attend?

"I'm not sure we'll play in the playoffs if the parents can't be there, to be honest with you," Notre Dame's Kelly said to reporters Friday. Kelly supported moving the semifinal at the Rose Bowl to a different location.

The national championship game is scheduled to be held at Hard Rock Stadium in Miami Gardens, Florida.