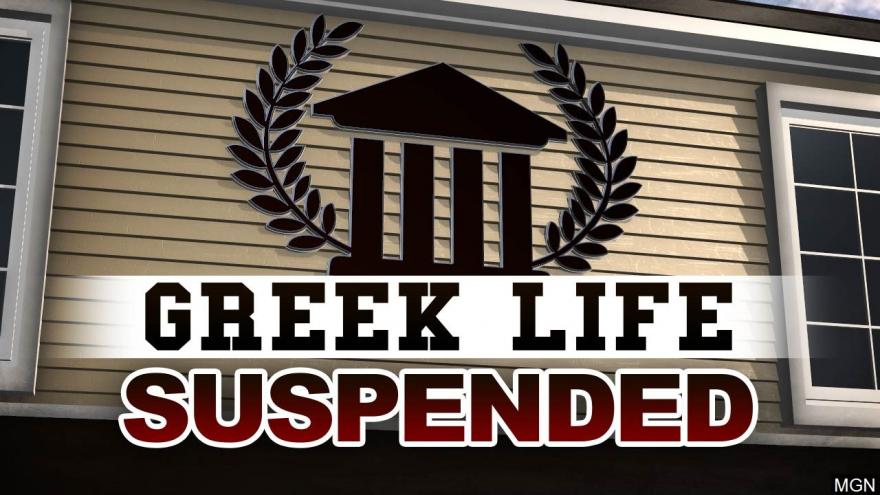 (CNN) -- Ohio University has suspended all Interfraternity Council fraternities on its Athens campus after "troubling allegations" of hazing, university officials said in a release Thursday.

Seven IFC chapters were accused of hazing new members, the school said, and will be investigated for possible violations of the university's student code. Last spring, a fraternity was expelled from the university following the death of an 18-year-old fraternity pledge.

All IFC chapters will be prohibited from engaging in any events, meetings and activities because of "growing concern elevated by allegations of hazing,"the release said.

"These troubling allegations, which will be thoroughly investigated, indicate a potentially escalating systemic culture within our IFC organizations,"Dean of Students Jenny Hall-Jones said in a letter to the fraternities. "Ohio University will not put at risk the health and safety of our students."

The university expelled the Sigma Pi fraternity in April after a student was found dead in the fraternity house. Parents of Collin Wiant have filed a lawsuit against the fraternity alleging their son died in November 2018 as a result of fraternity hazing.

While pledging the fraternity, Wiant was allegedly made to undergo severe hazing, including being beaten with a belt, punched, made to take drugs, forced to drink a gallon of alcohol in an hour and deprived of sleep.

According to the lawsuit, filed in February in Athens County Court, a toxicology report showed Wiant died of "asphyxiation due to nitrous oxide ingestion." Canisters of nitrous oxide are sometimes used as inhalants, known as "whippets."

The fraternity chapter did not respond to CNN's requests for comment at the time.

"We are aware of the tragic passing of Collin Wiant this past November and we continue to extend our deepest condolences to his family and friends," Sigma Pi Executive Director and CEO Jonathan Frost told CNN in February.