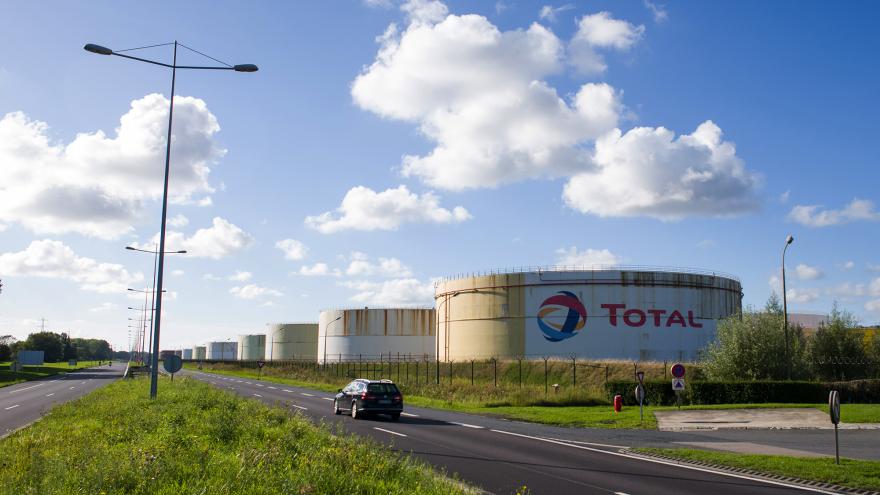 An automobile passes storage silos at the Total SE petrochemical plant in Le Havre, France, on Sunday, Sept. 6, 2020. The American Petroleum Institute is losing one of its biggest members over a disagreement about addressing the climate crisis - Nathan Laine/Bloomberg/Getty Images

(CNN) -- The American Petroleum Institute, the nation's largest and most powerful oil lobby, is losing one of its biggest members over a disagreement about addressing the climate crisis.

The exit underscores the divide in the oil industry over how to respond to climate change. Top European oil companies including Total and BP have made more aggressive promises to slash carbon emissions and invest in clean energy than ExxonMobil, Chevron and other US firms.

The move also comes amid a broader reckoning in Corporate America over political contributions following the insurrection at the US Capitol.

"This is a serious blow for API, whose influence largely stems from its claim to be the voice of the entire oil and gas industry," Andrew Logan, director of oil and gas at sustainability nonprofit Ceres, said in a statement. He added the split is "likely to mark the beginning of an exodus from the trade group."

Founded in 1919, the API now has more than 600 members, including ExxonMobil, Chevron, ConocoPhillips, BP and Shell.

Total has helped lead the industry response to the climate crisis. Last year, Total announced a goal to get to net-zero emissions by 2050. Importantly, that goal included the so-called scope 3 emissions from the products it sells, namely gasoline, jet fuel and diesel. For major oil-and-gas companies, scope 3 can comprise as much as 85% of total emissions, according to S&P Global Market Intelligence.

"We are committed to ensuring, in a transparent manner, that the industry associations of which we are a member adopt positions and messages that are aligned with those of the group in the fight against climate change," Patrick Pouyanne, Total's CEO, said in a statement.

Total said a "detailed analysis" of API's climate positions revealed the lobby is only "partially aligned" with the company. Total cited several "divergences," including API's support for rolling back US regulation on methane emissions, which the company opposed in November 2019. Total also noted that API is part of the Transportation Fairness Alliance, which is opposed to providing subsidies for electric vehicles.

Additionally, Total said that during the recent elections, API supported candidates who opposed the United States' participation in the Paris climate agreement. President-elect Joe Biden has promised to swiftly return the nation to the accord.

Indeed, InfluenceMap, a London-based think tank focused on energy and climate change, said the API "appears to be broadly hostile to progressive climate policy." The group gives the API an "F" in terms of how aligned its climate policy is to the Paris agreement.

API says it wants to work with Biden

In a statement, the API defended its climate record and thanked Total for its membership.

"We believe that the world's energy and environmental challenges are large enough that many different approaches are necessary to solve them, and we benefit from a diversity of views," an API spokesperson said.

The API said it supports the "ambitions of the Paris Agreement, including global action to reduce greenhouse gas emissions and alleviate poverty around the globe."

Mike Sommers, API's CEO, said during a call with reporters this week that the group wants to work with President-elect Biden and the EPA on reducing methane emissions. "We're open to the possibility of further regulation in this space," Sommers said, adding that the Biden administration should collaborate with the industry to come up with regulation that can "actually survive judicial scrutiny."

Edward Collins, director of corporate climate lobbying at InfluenceLobby, said Total's departure will "place pressure on BP and Shell to seriously examine their own memberships."

Both European oil companies have promised to overhaul their businesses as they transition to low-carbon energy. And they both plan to get to net-zero emissions by 2050.

In a statement, BP said it "actively" monitors its membership in trade associations, "especially those we view as only 'partially aligned' with us on climate-related issues."

"We remain committed to trying to influence those associations from within," BP said, adding that it plans to publish a trade association update in the second quarter.

Shell said that it regularly reviews its membership in industry associations, but it signaled no imminent exit from the API.

"Specific to climate, API is moving closer to Shell's own stated views," a Shell spokesman told CNN Business. "As a result, we feel it's beneficial to remain a member so that we can continue to advocate for change from within."