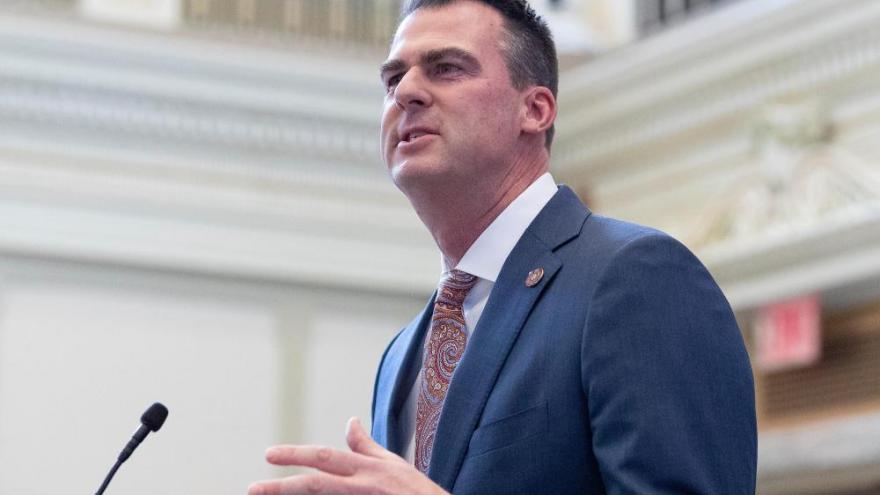 Oklahoma Republican Gov. Kevin Stitt, seen delivering his State of the State address on February 7, has signed legislation banning transgender women and girls from competing on sports teams consistent with their gender at public schools, public charter schools and public colleges in the state.

Oklahoma and Arizona, which enacted its own law later Wednesday, join three other GOP-led states that have established similar bans this year.

Like other governors who have enacted such bans, Stitt was surrounded by athletes from around the state during the ceremony, with girls brandishing signs that read "Save Women's Sports." In justifying the need for the law, the governor invoked University of Pennsylvania swimmer Lia Thomas, who has come to personify the debate around trans women's participation in sports.

"We all saw the imagery with the Penn swimmer, and we don't want that to happen to this young lady right here beside me when she grows up and gets into high school, and we're making that stand today in the state of Oklahoma," he said.

Opponents of Oklahoma's law immediately condemned Stitt. The American Civil Liberties Union of Oklahoma said he "has sent a clear message to Oklahoma's vulnerable transgender youth that they are not welcome or accepted in our state."

"Ultimately, SB 2 violates the United States Constitution and federal civil rights law, puts Oklahoma at risk of losing federal funding, and harms transgender youth, all to solve a problem that does not exist," said Tamya Cox-Touré, the group's executive director, in a statement.

The legislation requires sports teams at Oklahoma's public schools and colleges, public charter schools and private schools whose teams compete against those at public schools to designate athletic teams as being either co-ed or based on "biological sex."

"Athletic teams designated for 'females', 'women' or 'girls' shall not be open to students of the male sex," the law states. The legislation requires parents of students 18 and under to sign an affidavit "acknowledging the biological sex of the student at birth." Students 18 and older need to sign the affidavit themselves.

While sex is a category that refers broadly to physiology, a person's gender is an innate sense of identity. The factors that go into determining the sex listed on a birth certificate may include anatomy, genetics and hormones, and there is broad natural variation in each of these categories. For this reason, critics have said the language of "biological sex," as used in this legislation, is overly simplistic and misleading.

The new law also allows a "student who is deprived of an athletic opportunity or suffers any direct or indirect harm as a result of a violation" of the ban to bring a civil suit against the school.

"How is it fair for our children -- our daughters, granddaughters, nieces and cousins -- to compete against someone who has a very distinct biological advantage over them?" Republican state Sen. Micheal Bergstrom, one of bill's sponsors, said in a statement. "The bottom line is it isn't, and we must address this issue now and protect our female students from men infiltrating women's sports programs."

A 2017 report in the journal Sports Medicine that reviewed several related studies found "no direct or consistent research" on trans people having an athletic advantage over their cisgender peers, and critics say this legislation adds to the discrimination that trans people face, particularly trans youth.

The NCAA has come out in opposition to such bans, saying last April that it's closely monitoring them to make sure NCAA championships can be held "in ways that are welcoming and respectful of all participants."

The debate over the inclusion of transgender athletes, particularly women and girls, has become a political flashpoint, especially among conservatives.

So far this year, GOP governors in Arizona, Iowa and South Dakota have enacted similar sports bans. Though the issue has emerged as a key one for Republicans, party leaders have been divided on it in recent days. Last week, Republican governors in Indiana and Utah vetoed transgender sports bans in their states, saying the measures were unnecessary. Lawmakers in Utah, however, later overrode the veto to enact the measure.

Opponents of such bans have had limited legal success in fighting the measures, including last year when a federal judge temporarily blocked West Virginia's enforcement of its ban after advocates for the athletes sued the state, with the judge saying he had "been provided with scant evidence that this law addresses any problem at all, let alone an important problem." And in 2020, a federal judge blocked Idaho's enforcement of its sports ban.

This story has been updated with additional details and background information.