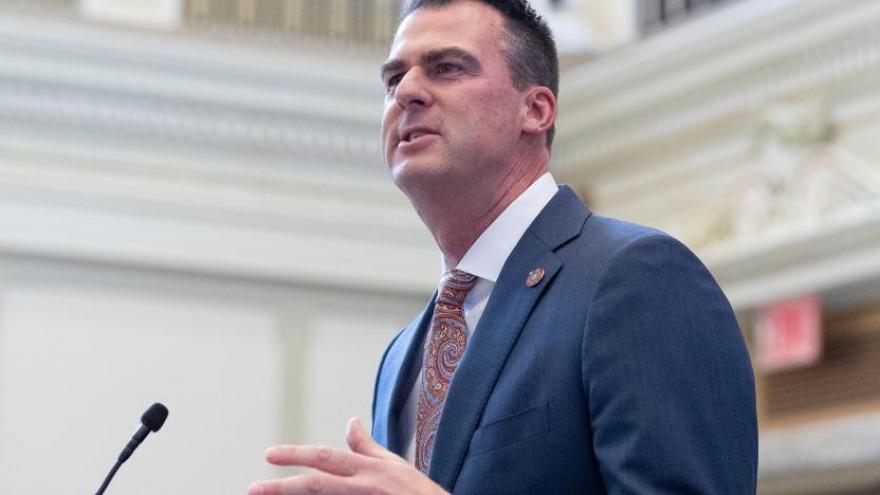 Oklahoma Gov. Kevin Stitt delivers his State of the State address in Oklahoma City, on February 7. Stitt on May 3 signed into law a bill modeled after the controversial Texas abortion law, which allows private citizens to take civil action against abortion providers to enforce the law.

The "Oklahoma Heartbeat Act," Senate Bill 1503, takes effect immediately and prohibits abortions at the time when a physician can detect early cardiac activity in an embryo or fetus, which can be as early as six weeks into a pregnancy -- before many women even know that they are pregnant. The measure provides exceptions for medical emergencies, but not for rape or incest.

"I am proud to sign SB 1503, the Oklahoma Heartbeat Act into law," Stitt, a Republican, said in a tweet with photographs of him signing the legislation. "I want Oklahoma to be the most pro-life state in the country because I represent all four million Oklahomans who overwhelmingly want to protect the unborn."

SB 1503 would also allow private citizens to bring a civil lawsuit against a person who performs or induces an abortion, intends to perform an abortion, or knowingly aids or abets an abortion, such as paying for the procedure. Under the bill, relief would include at least $10,000 in statutory damages for each abortion the defendant performed or aided in violation of the act, legal fees and compensatory damages.

The bill would prohibit civil action against certain individuals, including the woman who had the abortion or sought the procedure. The bill also would bar a person who impregnated a woman through rape, sexual assault or incest from bringing a civil action.

Last month, Stitt signed a near-total abortion ban into law that makes performing an abortion illegal in the state, with an exception only in the case of a medical emergency.

That law, which is expected to take effect this summer, makes performing or attempting to perform an abortion a felony punishable by a maximum fine of $100,000 or a maximum of 10 years in state prison, or both.

On Tuesday, shortly before Stitt signed the legislation into law, the Oklahoma Supreme Court declined to grant the plaintiffs' request for a temporary restraining order that would have paused the measure from taking effect.

The plaintiffs expressed disappointment in the court's decision but said they would continue fighting in hopes of ultimately blocking the law. The state's high court has not yet decided whether to hear the case, according to the plaintiffs.

Nancy Northup, the head of the Center for Reproductive Rights, which is representing the plaintiffs, said that the ban would "reverberate far beyond Oklahoma."

"Many Texans have been fleeing to Oklahoma for abortion services and may now be out of options. This is just a preview of what's to come if Roe is overturned," Northup said in a statement.

The Center for Reproductive Rights and Planned Parenthood last week also filed a separate challenge in an existing case to SB 612, the near-total abortion ban signed by Stitt last month.