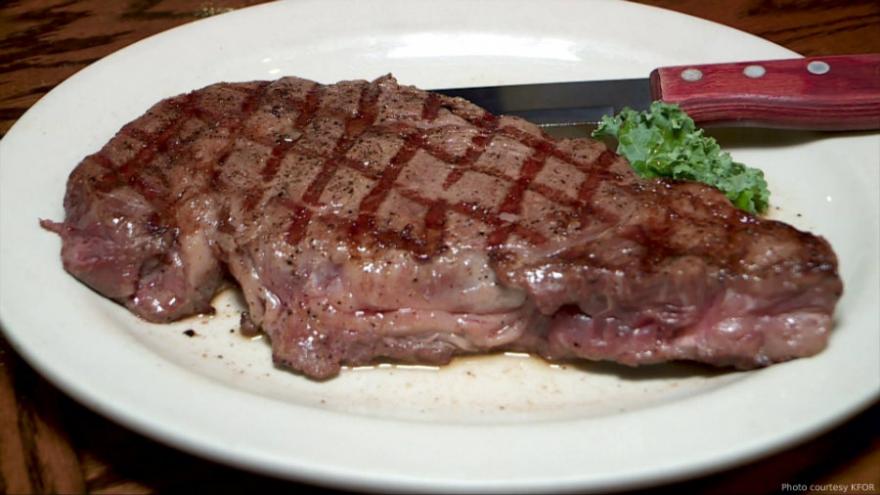 Oklahoma City, OK (KFOR) -- A state senator from northwestern Oklahoma wants to name the rib eye as the official 'State Steak of Oklahoma.' However, many Oklahomans think it's a waste of time and taxpayer money.

"We've got more important things to focus on. I understand it might be cute, but it's just a waste of time. We have other things to do," said Kareem, an Oklahoma City resident.

Senate Bill 21, which is authored by Sen. Casey Murdock, would name the rib eye the 'State Steak of Oklahoma.'

"I don't want to say it's a cheerleading bill, but it's promoting an Oklahoma product," Murdock said.

Murdock is a rancher himself. He points out that, with 5.2 million head of cattle in Oklahoma, we have more bovines than people.

"We get beat up on different issues; we're last in education, we're last in this and that, and we need to promote what is good in that state also," he said.

Murdock said that immortalizing the rib eye would be good for tourism and the restaurant industry.

"Having a steak that represents the state of Oklahoma is good for agriculture, it's good for the restaurant industry. It's got Cattlemen's name written all over it," said David Egan, of Cattlemen's Steak House in Oklahoma City.

But, some Oklahomans have other thoughts on spending legislative time and money on such a bill.

"I think Oklahoma has a whole lot of pressing issues versus someone wasting time thinking about rib eyes, naming it as our official steak," said Agafar Cooper.

"They could be working on education instead of thinking about steak names," said Brent Thrasher.

Murdock said it is not a superfluous bill.

"They say, 'Oh, you are wasting your time down there.' We are running bills anyway; this is just running a bill that is going to promote a business in Oklahoma. I don't like higher taxes; I like more businesses in Oklahoma paying more taxes. I see this bill as promoting the AG industry," he said.