Olivia de Havilland, star of 'Gone With the Wind,' dies at 104 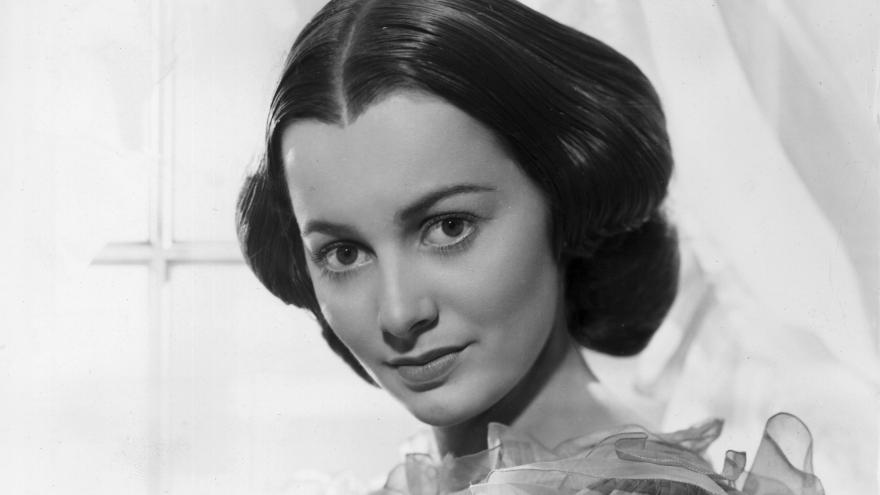 (CNN) -- Olivia de Havilland, a two-time Oscar winner and for decades the last surviving star of "Gone With the Wind," has died at the age of 104, her publicist Lisa Goldberg told CNN.

The actress died Sunday of natural causes at her residence in Paris, Goldberg said. She lived in Paris for more than six decades.

De Havilland emerged as a star during the classic movie era -- first as a romantic partner for Errol Flynn in swashbucklers such as "Captain Blood" and "The Adventures of Robin Hood" and then as Melanie Hamilton Wilkes in "Gone With the Wind" (1939), considered the top moneymaking film of all time when adjusted for inflation.

By the late 1940s, she had become one of the screen's top actresses.

But her off-screen role in a lawsuit against her employer, Warner Bros., may have been her most notable achievement in Hollywood.

In 1943, de Havilland sued the studio after it attempted to extend her seven-year contract, which was expiring. Under the studio system, actors faced suspension without pay if they turned down roles, and the suspension time was added to their contracts.

De Havilland's eventual court victory helped shift the power from the big studios of that era to the mega-celebrities and powerful talent agencies of today.

"Hollywood actors will be forever in Olivia's debt," de Havilland's friend and frequent co-star Bette Davis wrote in her autobiography, "The Lonely Life."

De Havilland later recalled how rewarding the ruling was for her.

"I was very proud of that decision, for it corrected a serious abuse of the contract system -- forced extension of a contract beyond its legal term. Among those who benefited by the decision were the actors who fought in World War II and who, throughout that conflict, were on suspension," the actress told the Screen Actors Guild in a 1994 interview.

In recent years, Jared Leto credited the so-called de Havilland Law for helping his band, Thirty Seconds to Mars, in a contract dispute with its record label.

About three-quarters of a century after that landmark ruling, de Havilland lost a lawsuit she brought against the makers of the 2017 FX Networks miniseries, "Feud: Bette and Joan."

The US Supreme Court declined to review the case after the centenarian failed to convince a California appellate court that the filmmakers had depicted her in a false light and should have gotten her permission to be portrayed in the drama.

Her first Oscar win -- for "To Each His Own" -- also brought into the spotlight an often strained relationship with her famous younger sister, Joan Fontaine. At the 1947 ceremony, Fontaine tried to congratulate her sibling backstage, but de Havilland brushed her aside, reportedly telling her press agent, "I don't know why she does that when she knows how I feel."

Fontaine, also an Oscar winner, died in December 2013, at age 96, fueling press speculation about whether the sisters had ended one of Hollywood's most famous family feuds before her death.

"I regret that I remember not one act of kindness from her all through my childhood," Fontaine said of her sister in her memoir, "No Bed of Roses."

De Havilland rarely made any public remarks about her sibling. Asked about their relations in a 2006 interview with David Thomson, she replied, "How shall I put it? Well, let's just say they stand still."

At the time of Fontaine's death, she issued a statement that she was "shocked and saddened" by the news.

Olivia Mary de Havilland was born July 1, 1916, in Tokyo to British parents. Both Olivia and Joan were often ill as children, and their mother decided to return to England for treatment. A stopover in San Francisco led the trio to settle in Saratoga, California. Eventually the girls' parents divorced, and their mother remarried.

De Havilland caught the acting bug in a school production of "Alice in Wonderland." Her dedication to the craft led her to defy her stepfather's warning against appearing in plays and to leave home early before graduating from high school.

She got her first professional break as an understudy for Gloria Stuart (later the elderly Rose in "Titanic") in Max Reinhardt's production of "A Midsummer Night's Dream." After Stuart bowed out, de Havilland won the role of Hermia and made her stage debut in Shakespeare. The Hollywood Bowl appearance led to a contract with Warner Bros. and the 1935 film version of the play.

But another 1935 movie made her a star, at age 19, ensuring her immortality as part of a great screen team. "Captain Blood" was the first of eight films pairing de Havilland with Errol Flynn.

De Havilland later said her swashbuckling co-star was her first love but that the timing was never right, especially for the wayward Flynn.

"I had a great crush on him," she told The New York Times in 1976. "Eventually, he got one on me. It was inevitable to fall in love with him. He was so naughty and so charming."

Flynn perhaps set the tone for their relationship by playing practical jokes on his co-star, even hiding a snake once in her panties before a costume change.

"It slowly penetrated my obtuse mind that such juvenile pranks weren't the way to any girl's heart. But it was too late. I couldn't soften her," Flynn admits in his autobiography, "My Wicked, Wicked Ways," noting he had fallen for de Havilland by their second film, "The Charge of the Light Brigade" (1936).

While the movies with Flynn were popular, the roles were rarely challenging. The actress began to feel trapped playing beautiful but demure heroines.

When Margaret Mitchell's "Gone With the Wind" became a huge bestseller in the late '30s, every actress seemed to be vying for the role of Scarlett O'Hara, the selfish, headstrong heroine. But not de Havilland. She had her eyes on Melanie, Scarlett's sweet and sympathetic sister-in-law.

"Scarlett didn't interest me at all. She was a career girl, after all, and I was a career girl," the actress told The New York Times in 2004. "Melanie was something else. She is a happy woman, she is a loving woman, and you cannot say Scarlett was loving."

The only obstacle for de Havilland was her contract with Warner Bros., which was reluctant to loan her to producer David O. Selznick for the film.

De Havilland, then in her early 20s, strategized about how to win the part, deciding to make her case before the boss' wife. Over tea, the actress pleaded with Ann Warner to intervene on her behalf. Jack L. Warner finally relented, and de Havilland headed to Selznick International to make what many in Hollywood thought was going to be a disaster.

But the star later told writer Gavin Lambert she always knew the movie would be "something special, something which would last forever."

Melanie was the first of de Havilland's roles to downplay her attractiveness. It also revealed her affinity for playing "good girls."

"I think they're more challenging," she explained to the Times in 2004. "Because the general concept is that if you're good, you aren't interesting. And that concept annoys me, frankly."

De Havilland earned the first of five Oscar nominations with a best supporting actress nod for "Gone With the Wind," but she lost to co-star Hattie McDaniel, who became the first African American to win an Academy Award.

A studio fight, then a career peak

Returning to Warner Bros. after "Gone With the Wind" was not easy. De Havilland discovered she would have a supporting role in a film with Flynn. Bette Davis was the leading lady in "The Private Lives of Elizabeth and Essex," with de Havilland reduced to the queen's lady-in-waiting.

Good roles for actresses were hard to come by at the studio known for its tough, masculine image, and Davis ruled the roost as its lone major female star.

In one bright spot, she scored a best actress nomination for another loan-out deal, "Hold Back the Dawn" (1941), as a spinsterish schoolteacher who falls for European refugee Charles Boyer as he's struggling to enter the United States. She lost again, this time to her sister, Fontaine, who won for "Suspicion" (1941).

De Havilland was ready to move on when her contract expired. However, Warner Bros. had other ideas, tacking on 25 weeks from her suspensions to the contract.

She decided to take legal action, a risky move that would keep her off the screen for nearly three years. If she lost the lawsuit, her Hollywood career might be over.

"I really had no choice but to fight," the actress recalled to the Los Angeles Times in 2006.

The California Court of Appeal for the 2nd District upheld a lower court ruling in de Havilland's favor, finding that a personal service contract was limited to a calendar year of seven years.

Studio chief Warner admitted in his autobiography that de Havilland had "licked" him. He noted his onetime star "had a brain like a computer concealed behind those fawnlike brown eyes."

De Havilland now was able to plot her career. Within three years, she had won two Academy Awards.

She displayed a new versatility in "To Each His Own," moving in flashbacks from a young unwed mother who loses her son to a middle-aged businesswoman. "The Dark Mirror," also from 1946, showcased de Havilland in dual roles as identical twins -- one good and the other a disturbed killer.

But she really came into her own as an actress with the "The Snake Pit" and "The Heiress."

The former -- a look at a woman who spirals into mental illness -- appears dated today, but critics in 1948 praised the movie and actress for tackling such a serious subject.

De Havilland reached the peak of her career in William Wyler's "The Heiress" as Catherine Sloper, a plain, awkward girl courted by a fortune hunter for her inheritance. She becomes an embittered woman who turns the tables on a cold, unloving father (Ralph Richardson) and her suitor (Montgomery Clift).

This adaptation of a play based on Henry James' "Washington Square" won de Havilland her second Oscar for best actress.

She also appeared on Broadway in "Romeo and Juliet," "Candida" and "A Gift of Time" with Henry Fonda. In the '70s and '80s, she took supporting roles in disaster movies such as "Airport '77" (1977) and "The Swarm" (1978) and on television in "Roots: The Next Generations," the 1979 sequel to the landmark miniseries. She received an Emmy nomination for best supporting actress in a miniseries or special for one of her final roles, "Anastasia: The Mystery of Anna" (1986).

She retired from acting in the late '80s but continued to make public appearances and receive honors for her long career, including the National Medal of Arts in 2008 "for her lifetime achievements and contributions to American culture as an actress" and France's Legion of Honor in 2010.

In June 2017, Britain's Queen Elizabeth II made de Havilland a dame "for services to drama" -- two weeks' shy of her 101st birthday.

The star was known for dating many notable bachelors in her Hollywood heyday, including Howard Hughes, James Stewart and director John Huston. She was married, and divorced, twice -- first to writer Marcus Goodrich and then Paris Match editor Pierre Galante. Her son, Benjamin Goodrich, died in 1991 from complications of Hodgkin lymphoma. Daughter Gisèle Galante is a journalist.

News accounts often reported the actress was working on a long-awaited autobiography, but nothing appeared during her lifetime. She did write a 1962 memoir about her life in France called "Every Frenchman Has One."

De Havilland survived virtually all of her contemporaries from the movies' golden age -- even writing a tribute to the younger Mickey Rooney for Time when he passed away in April 2014. Ironically, the sickly Melanie died near the end of "Gone With the Wind," yet the actress who played her long outlived co-stars Clark Gable, Vivien Leigh, Leslie Howard and McDaniel.

Asked two decades ago to explain her longevity, this "Steel Magnolia" told a Screen Actors Guild interviewer, "I don't understand the question -- I'm only 78 years old!"