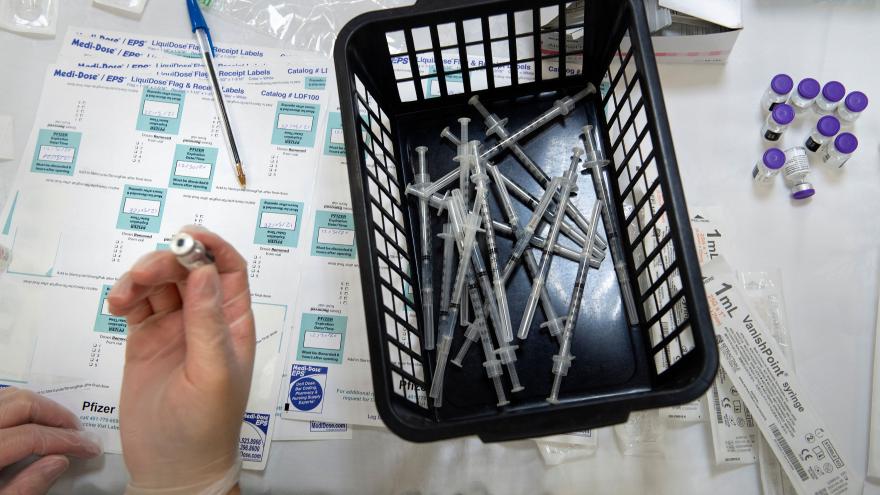 Brendan Smialowski/AFP/Getty Images-A pharmacist works to dilute the Pfizer COVID-19 vaccine while preparing it to administer to staff and residents at the Goodwin House Bailey\'s Crossroads, a senior living community in Falls Church, Virginia, on December 30, 2020.

(CNN) -- While hopes of vaccinating 20 million people by New Year's Day sputtered out, the US now faces staggering new challenges in the fight against Covid-19.

Over the past week, the US has averaged 2,637 coronavirus deaths every day, according to Johns Hopkins University.

That's an average of one Covid-19 death every 33 seconds.

December was actually the deadliest month yet of this pandemic, with 77,572 lives lost.

And deaths are likely to accelerate as new infections and hospitalizations rise.

On Sunday, more people were hospitalized with Covid-19 than any other day in this pandemic -- 125,544, according to the Covid Tracking Project.

The US averaged 213,437 new infections every day over the past week, largely fueled by holiday gatherings, health experts say.

That number will likely keep rising, as the Transportation Security Administration said it screened more than 1.3 million travelers Sunday -- a new record for this pandemic.

Doctors now worry this rampant spread of Covid-19 will push more hospitals beyond capacity and lead to more deaths as the vaccine rollout staggers along.

The possibility of giving half-doses of a vaccine

About 15.4 million vaccine doses have been distributed in the US, but only 4.5 million people have received their first doses, the US Centers for Disease Control and Prevention said Monday.

That's far behind what officials had hoped for by now. And it means herd immunity is still many months away.

"We agree that there is a lag. We'll work with the states," said Moncef Slaoui, chief scientific adviser of the federal Operation Warp Speed vaccination effort.

To help expedite vaccinations, the US might start giving half-doses of Moderna's Covid-19 vaccine to people age 18 to 55, which could make the vaccine available to twice as many people in that age group, Slaoui said.

The US Food and Drug Administration will meet this week to consider that possibility, Slaoui said.

The decision to cut the current 100-microgram dose in half, with another half-dose 28 days later, is ultimately up to the FDA, Slaoui told CNN Chief Medical Correspondent Dr. Sanjay Gupta.

Binding and neutralizing antibody responses were similar among participants under age 55 who received either 100-microgram or 50-microgram doses, Slaoui said, citing earlier data.

While an FDA briefing document last month also mentions these "comparable" immune responses from Moderna's study, the full data has not yet been published.

Slaoui said he's "not sure it holds for Pfizer," whose vaccine dose is 30 micrograms, noting that conversation has yet to happen. Similar to the Moderna vaccine, the Pfizer/BioNTech vaccine is intended to come in two doses, spaced several weeks apart.

CNN has reached out to Moderna and Pfizer for comment.

Not everyone likes the notion of cutting vaccine doses in half. Dr. Paul Offit, a member of the FDA's vaccine advisory committee, told CNN's Elizabeth Cohen that giving half-doses of the vaccine is "a terrible idea."

"There's no data on efficacy of a half dose. If you use a half dose, you're just making it up. You're just hoping that you're right," said Offit, an infectious disease specialist at the University of Pennsylvania. "Why would you dare to make up something when you don't know whether or not it works?"

Dr. Jonathan Reiner, a professor of medicine at George Washington University, said he does not agree with the idea.

It's difficult enough to get some patients on board with getting a vaccine, he said. Going against the recommended dosing could hurt patients' confidence.

"When I see people in clinic, I talk about the vaccine every single day. I'm trying to reduce vaccine hesitancy," Reiner said Monday.

"And the strongest weapon I have is the data. I can tell people that these two vaccines have been studied in 70,000 people -- more than 70,000 people -- in this two-dose strategy. And when given that way, they're both 95% effective, and basically no one gets critically ill if you get this vaccine. ... Once you break from the data, I can no longer say that."

Ideas for speeding up vaccinations

It's critical to get vaccines into people's arms soon, especially as a highly contagious strain first detected in the UK is now spreading in the US, former FDA Commissioner Dr. Scott Gottlieb said.

"New variants of the virus that appear more contagious increase the urgency to deploy the vaccine as fast as possible," Gottlieb wrote in a Wall Street Journal op-ed published Sunday.

He offered three ideas for speeding up Covid-19 vaccinations across the US:

"First, the government needs to ship more inventory," Gottlieb wrote. "Right now, the feds are holding back up to 55% of doses. The idea is to make sure there is supply to give everyone a second dose, within three weeks for Pfizer and four weeks for Moderna.

"Second, the distribution system needs improvement," he said. "National pharmacy chains like CVS and Walgreens have an agreement with the federal government to provide vaccines to long-term care facilities. The government should expand this program to help vaccinate all Americans."

Third, Gottlieb wrote, "The demand for vaccines may not align with those who are eligible ... Essential workers may stand to benefit a lot, but what if there's more demand among those over 65? If stockpiles continue to build, eligibility should be expanded."

In California, health care workers are treating an unprecedented number of Covid-19 patients. Sometimes, those patients are colleagues.

On Monday, the hospital said one employee who was working Christmas Day has died of Covid-19.

"Our thoughts and prayers are with those affected by this terrible loss," the hospital said in a statement. "We are providing support to our employees during this difficult time," according to a statement from the hospital.

Over the weekend, Chavez said the medical center is investigating whether an inflatable, air-powered costume may have played a role in the spread.

"A staff member did appear briefly in the emergency department on December 25th wearing an air-powered costume," she said.

"Any exposure, if it occurred, would have been completely innocent, and quite accidental, as the individual had no Covid symptoms and only sought to lift the spirits of those around them during what is a very stressful time."

Chavez said air-powered costumes will no longer be allowed at the facility.

"If anything, this should serve as a very real reminder that the virus is widespread, and often without symptoms, and we must all be vigilant," she said.

On Sunday, five states reported their highest number of new infections ever in one day -- Arizona, New Hampshire, Oklahoma, South Carolina and Washington.

And over the past week, at least five states have average test positivity rates higher than 40% -- meaning more than 40% of people who take a Covid-19 test get a positive result.

In South Carolina, which had a 29.6% test positivity rate Sunday, officials in four counties said their hospitals were at 100% capacity, according to the South Carolina Department of Health and Environmental Control.

"We're in for a bit of a rough start to 2021," said Maria Van Kerkhove, the World Health Organization's technical lead for Covid-19 response.

But it's possible daily life in the US could be closer to normal by the summer or fall, she said. Other countries are already well on their way -- thanks to quarantining, testing, isolation and contact tracing.

Covid-19 hospitalizations impact other families, too

The massive surge of Covid-19 has led to medical worker shortages, insufficient hospital space, postponed surgeries and reduced care for some patients.

Even families that don't have coronavirus are feeling the impact.

US Surgeon General Jerome Adams said his wife Lacey was hospitalized due to complications from her cancer treatment. But he wasn't able to see her because of Covid-19.

"I want people to understand that if you don't take precautions against Covid because you don't feel at risk, it can impact you, your family, your community in so many other ways," Adams said.

"I, as the surgeon general of the United States, had to drop my wife off at the front door and couldn't see her go in to the hospital, hadn't been able to visit her, didn't know if she was going to have a hospital bed because of all of the Covid precautions."

Adams urged Americans -- especially those who gathered over the holidays -- to self-quarantine, get tested, wear a mask, wash their hands and watch their distance.

"The projections are pretty scary, but they're projections, and what we do now matters," Adams said.

"I want people to understand that if we get over this current surge, then things will start to get better. But it depends on the actions that we all take right now."