One dead after flooding in Wisconsin and Michigan 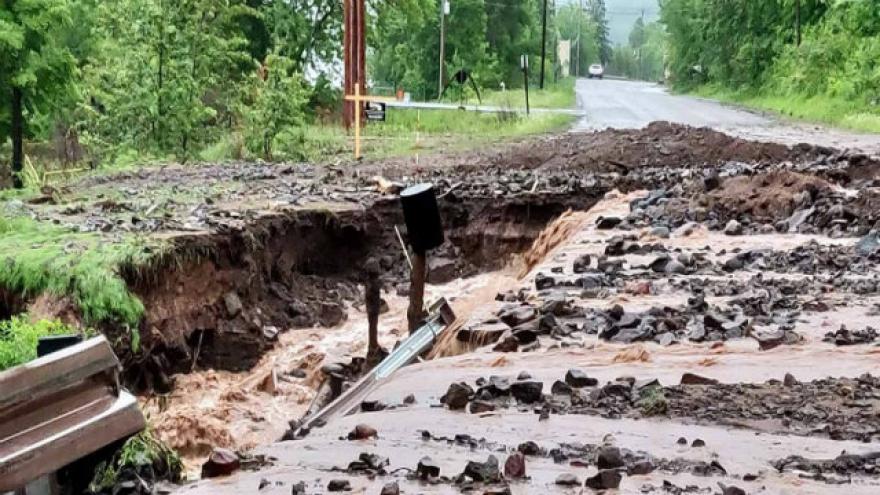 (CNN) -- Devastating floods ravaged Michigan's Upper Peninsula and parts of the Midwest this weekend, with one death reported in northern Wisconsin.

It was not only heavy rains of 6 to 8 inches and flooding that struck parts of Michigan, Wisconsin and Minnesota. Some areas saw damaging winds, large hail, downed trees, demolished roads and buildings.

The downpours led to more than 60 sinkholes and washouts, according to CNN affiliate WLUC-TV. The flooding also left water and sewer lines exposed.

One man was found dead in Ashland County, Wisconsin, after his vehicle was seen in a flooded roadway, according to the county's sheriff's office. On Sunday morning, deputies found a pickup truck in a ditch in a flooded road with the driver's door open. The water had reached up to six to eight feet on the driver's side. The driver's body was found about 60 feet from the car. He was identified as Thomas Koeper, 75, of Mason, Wisconsin, and the incident is under investigation, according to the Ashland County Sheriff's Office.

The weather was blamed for injuries suffered by a 12-year-old boy early Sunday when his home caved in during flash flooding in Houghton County, Michigan. County Administrator Eric Forsberg said the boy is alive, but had no information on his condition.

Because of the weekend weather, Wisconsin Gov. Scott Walker declared a state of emergency on Monday for Ashland, Bayfield, Burnett, Douglas and Iron counties, directing state agencies to assist and calling on the Wisconsin National Guard to help with efforts.

Michigan Gov. Rick Snyder on Monday declared a state of disaster for Houghton and Menominee counties.

"This declaration will ensure additional state resources are available so that damages can be repaired as quickly as possible," Snyder said in a statement.

Both Michigan counties originally declared a "local state of emergency" on Sunday, activating local emergency response and recovery plans. The governor's declaration, though, allows for National Guard deployment in these counties to assist with road repairs in the affected areas.