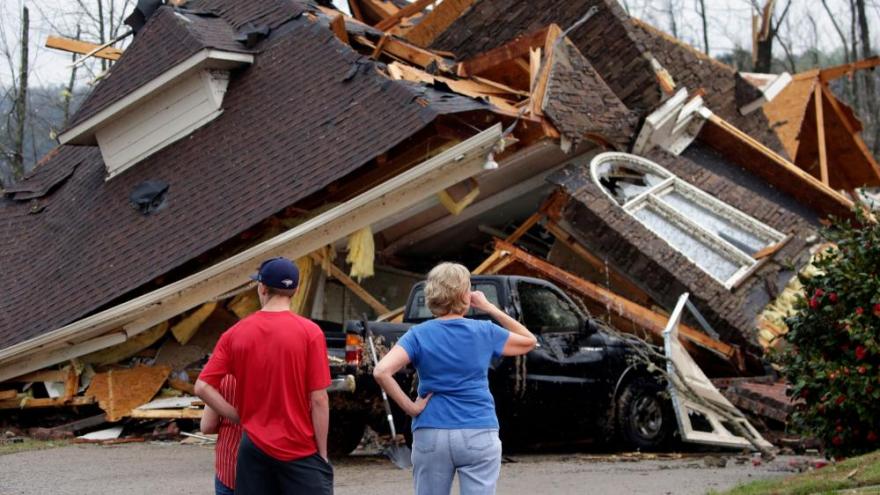 Residents survey damage to homes after a tornado touched down south of Birmingham, Alabama, on March 25.

(CNN) -- As Alabama residents continue sheltering in place from disastrous storms, residents who spoke to CNN described scenes of terror, devastation and shock.

"I was like this is probably it. I'm probably dead," Cesar Villaseñor, 22, told CNN after he and his boss were caught in a potential tornado in Pelham.

Fourteen tornadoes were reported in Alabama on Thursday, according to the National Weather Service, and one in Mississippi. And authorities have reported extensive damage in the Birmingham metro area.

Villaseñor and his boss had been trying to get to a shelter at his boss' house when they got caught up in the storm.

"We were literally half a mile from his house and everything was all clear. Out of nowhere, it starts raining and I started recording -- everything starts going to hell basically," he said. "At one point, the van was shaking really bad to the point that I thought it was like to flip over. I was just shaking. I couldn't control my hands."

Another resident told CNN affiliate WVTM-TV that she watched her cousin's home destroyed as the tornado swept through.

Alex McNair, owner of Corefit Strong in Pelham, Alabama, told CNN his gym was practically destroyed by a tornado.

"The roof was lifted off, bricks were thrown through the windows of our garage doors, debris tossed inside the gym, our HVAC unit was ripped off our roof, glass thrown throughout the gym, our flooring is destroyed, along with other roof and structural damage to other parts of the building," McNair wrote to CNN.

He said what was most important was that no one was hurt.

"The only thing damaged was material objects which can be replaced," he wrote.