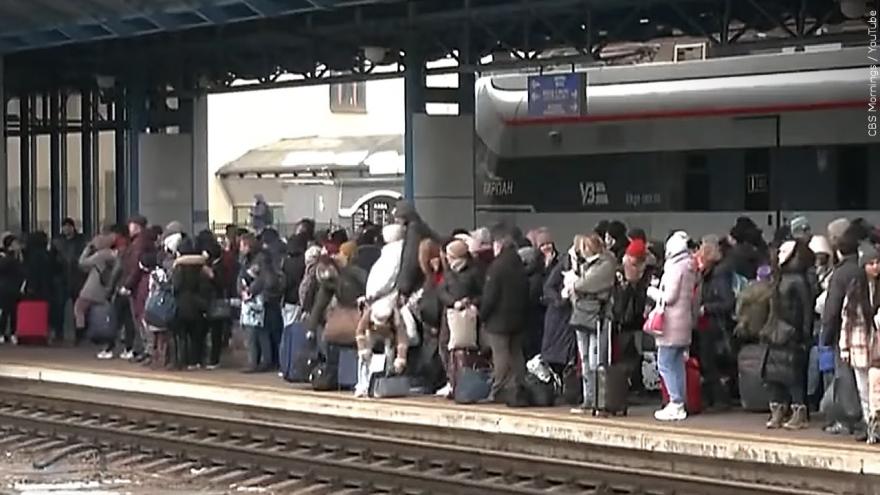 (CNN) -- Russia's relentless bombardment of residential areas across Ukraine has so far forced more than one million refugees to flee the country in just seven days, according to the United Nations, as fierce fighting continues into its second week.

Filippo Grandi, the UN High Commissioner for Refugees, said in a statement Thursday: "I have worked in refugee emergencies for almost 40 years, and rarely have I seen an exodus as rapid as this one."

By way of comparison, it took three months for one million refugees to leave Syria in 2013 when departures there were at their height, according to the UNHCR, the UN Refugee Agency.

Millions more people are likely to be forced to flee Ukraine, Grandi said. He added: "International solidarity has been heartwarming. But nothing -- nothing -- can replace the need for the guns to be silenced; for dialogue and diplomacy to succeed. Peace is the only way to halt this tragedy."

In Ukraine's capital Kyiv, residents were awoken in the early hours of Thursday by at least one large explosion in the southwest of the city, following a day of heavy shelling. To the south, the mayor of the strategically important city of Kherson on the Black Sea indicated that Russian forces had seized control, though claims remain disputed. And in the port city of Mariupol, residents are without electricity and water, according to local officials, as Russian troops step up their offensive.

A Kherson resident described the situation there as a "humanitarian catastrophe," telling CNN Thursday there had been chaos and panic in the city as residents tried to get basic necessities.

According to the local resident, there is a severe lack of food and medicine -- particularly insulin -- with pharmacies being looted.

The resident added that there had been a significant amount of looting by Russian troops, and said that Russian soldiers had been seen arresting men.

The mayor of Kherson, Ihor Kolykhaiev, said Wednesday the Ukrainian military is no longer in the city and that its inhabitants must now carry out the instructions of "armed people who came to the city's administration" -- indicating that the city has now fallen under Russian control.

In Mariupol, the deputy mayor said the southeastern Ukrainian city had faced 26 hours of continued shelling and warned it also now faces a humanitarian crisis.

Further north, Ukrainian resistance in the country's second biggest city, Kharkiv, continues to hold out, as Russian strikes hit at least three schools and damaged a cathedral and shops on Wednesday, according to videos and photos posted to social media, geolocated and verified by CNN.

In a broadcast message Thursday, President Volodymyr Zelensky addressed Russian forces, saying: "You are leaving people without food, you are leaving us without medication. You are shelling evacuation routes, there's no weapon you wouldn't use against us, against free citizens of Ukraine."

For those who have fled the country, most have gone to Poland, to Ukraine's west, with large numbers also entering Hungary, Moldova, Romania and Slovakia. Dramatic video filmed Wednesday showed crowds of people on a platform at Kharkiv train station queuing to get on a train to Uzhgorod, in the west, carrying their children and pets as they fled an assault on the city.

Worryingly, a "big number" of those crossing into Poland are unaccompanied children, according to Poland's Ambassador to the UN Krzysztof Szczerski. Many children crossing the border are leaving behind parents -- particularly their fathers, who have been called by the Ukrainian government to stay behind and fend off Russian troops, he said.

Meanwhile, the Czech government has declared a 30-day state of emergency from Friday in anticipation of a major influx of people fleeing the conflict.

The United Nations World Food Programme has launched an emergency operation to provide food assistance to people within Ukraine and in neighboring countries following an official request from the Ukrainian government. The organization is calling for $570 million to help refugees fleeing violence amid Russia's ongoing invasion.

With the scale of the humanitarian disaster becoming ever more apparent, the International Criminal Court announced Wednesday it had opened an immediate active investigation into possible war crimes committed by Russian forces in Ukraine.

ICC Prosecutor Karim A.A. Khan said in a statement Wednesday his office "had already found a reasonable basis to believe crimes within the jurisdiction of the Court had been committed, and had identified potential cases that would be admissible."

The move comes as the United States and other Western officials warned that Russian President Vladimir Putin could be shifting his strategy to further target cities and civilian infrastructure with heavy weapons and potentially "tens of thousands" of troops.

The Russian government has "strongly" rejected accusations that it has committed war crimes in Ukraine.

It's unclear exactly how many Ukrainian civilians have been killed during the war, but the United Nations Human Rights Monitoring Mission estimates there have been 750 civilian casualties. CNN cannot independently verify these numbers but there are fears of further casualties as Russian strikes hit built-up areas.

On Wednesday, the United Kingdom said it was "gravely concerned" by "reports of the use of cluster munitions" by Russia during its ongoing invasion of Ukraine. And earlier that day, US Ambassador to the UN Linda Thomas-Greenfield said Russia was moving banned weaponry into Ukraine.

"We have seen videos of Russian forces moving exceptionally lethal weaponry into Ukraine, which has no place on the battlefield. That includes cluster munitions and vacuum bombs -- which are banned under the Geneva Convention," she said. Vacuum bombs, or thermobaric bombs are filled with high-temperature, high-pressure explosives and when detonated suck in the oxygen from the surrounding air to generate a powerful explosion and a large pressure wave that can have enormous destructive effects.

There is no evidence that thermobaric weapons have been used in the conflict in Ukraine, though CNN saw Russian thermobaric multiple rockets launcher south of Belgorod, Russia, on February 26.

The Russian advance in the south of Ukraine shows the beginning of a potential land bridge that could link the port city of Odessa, through Kherson and Mariupol to the separatist-held pro-Moscow territories in the east.

"It is quite clear that Putin is pushing for a land corridor to Crimea. I mean that is an obvious objective," NATO's former Deputy Supreme Allied Commander for Europe Richard Shirreff told CNN.

He said he feared the push could cause an increase in civilian deaths as cities become ruins.

"I'm afraid to say I don't think we have seen anything yet in terms of the destruction that's likely to happen," Shirreff added.