One of the three missing people in the Colorado Marshall Fire has been accounted for, sheriff says 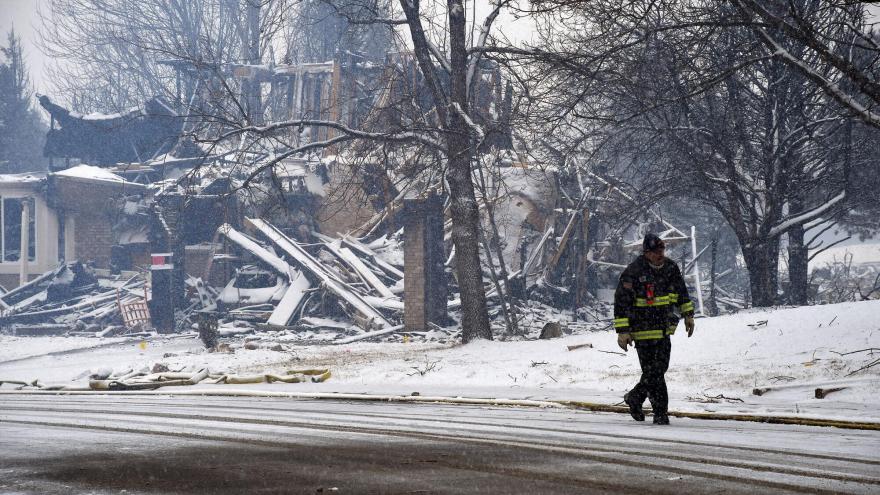 One of the three missing people from the Marshall Fire in Colorado has been accounted for, Boulder County Sheriff Joe Pelle said in a news conference, and pictured, a destroyed home is covered in snow in Louisville, Colorado, on December 31, 2021.

(CNN) -- One of the three missing people from the Marshall Fire in Colorado has been accounted for, Boulder County Sheriff Joe Pelle said in a news conference Sunday.

The Marshall Fire tore through Boulder County on Thursday, leveling subdivisions and charring more than 6,000 acres. The missing person who was found was from Superior, about 24 miles northwest of Denver.

"We are still missing a woman from the town of Superior and a man from out by Marshall. The search for those folks is still underway," Pelle said Sunday.

There have still been no reported deaths as a result of this fire, officials have said.

The origin of the blaze is still under investigation, but a search warrant was executed at a private property, Pelle said.

Pelle said they are aware of a viral video of a shed that was on fire in the area where the wildfire originated.

"We don't know that that shed or anything around it was the actual start of the fire or whether it was secondary," Pelle said.

Pelle acknowledged authorities have spoken to people about the fire.

"We've talked to folks and I am not going to go into the investigation,"Pelle said.

A man was arrested Thursday afternoon for threatening firefighters who were working during the time of the wildfire in Boulder County, Louisville Police Chief David Hayes said in a news conference.

"A gentleman armed with an assault rifle had threatened the firefighters that were working in the area," Hayes said. "A number of officers responded -- both Louisville officers, Boulder sheriff's deputies and I'm sure others -- and we were able to safely take that person into custody."

The chief noted they recovered "a couple of weapons."

Hayes was unable to provide information about why the man was threatening the firefighters. He could also not confirm whether the man resided in a home in the area.

Asked whether the man was trying to protect his property, the chief said, "I think (he) was just probably angry and upset like a lot of people are, but that's not, obviously, not the way to do it."

The Marshall Fire was one of two blazes that started Thursday morning. Fueled by strong winds, its flames sped across drought-parched land, traveling "down a football field in a matter of seconds," Gov. Jared Polis said in a Thursday news conference.

The other fire, known as the Middle Fork Fire, was attacked quickly and "laid down," Pelle said.

The areas impacted by the Marshall Fire have since seen about 8 inches of snow, dousing the flames but leaving many homeless and cold. The fire has destroyed nearly 1,000 homes in Boulder County.

About 100 personnel from the Federal Emergency Management Agency are assigned to assist victims of the Marshall Fire, said FEMA administrator Deanne Criswell.

Criswell, who surveyed fire damage with Polis on Sunday morning before speaking to reporters, said FEMA representatives will be at the disaster assistance center "starting today" to register individuals seeking extra assistance for expenses not covered by homeowner's insurance.

Criswell told CNN's Fredricka Whitfield after the news conference Sunday that federal teams are working with state and local officials to clear debris and develop a housing strategy for immediate as well as long-term needs.

"Some people are still in shelters run by the state and some are staying with family and friends," Criswell said. "We're going to work closely with the state and see what we can do through our non-congregate sheltering program that's part of the disaster declaration, as well as other tools that we have in our toolbox to look at what the long term options that we have available to meet the specific needs of these communities."

Power remains out for a number of residents in the burn zone area.

"Within the burn zone we have roughly a thousand customers that remain without power," said Alice Jackson, president at power company Xcel Energy-Colorado.

The process of restoration is ongoing, she said.