One rescued after possible gas explosion levels 3 Philadelphia row houses; search for others to start 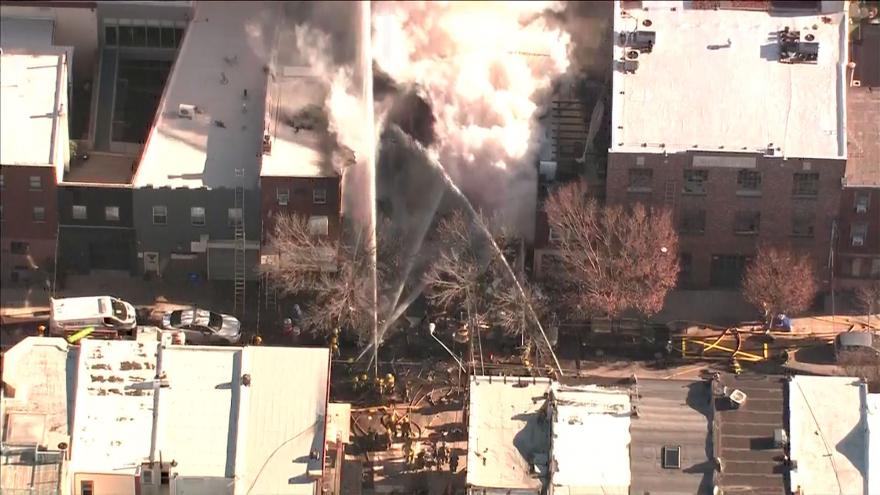 (CNN) -- One person was rescued and others are feared dead after a possible gas explosion toppled three South Philadelphia row houses and significantly damaged two other buildings on Thursday, officials said.

Firefighters were looking for at least one person in one collapsed building after responding to reports of an explosion and fire at a tenement on South 8th Street about 11:30 a.m., Fire Commissioner Adam Thiel told reporters.

The person was trapped under heavy debris and is believed to have died, he said.

There were unconfirmed reports of possibly one or two other people trapped in the damaged buildings, Thiel said.

"We have to bring in heavy equipment to start de-layering the collapsed building," the commissioner said, describing the scene as still "dangerous and unstable."

About 60 people were evacuated from the block, the commissioner said.

The recovery effort was being hampered by the structural damage to the buildings and what authorities believe is a sinkhole forming in the street.

The heavy "gas-fed" fire, plus structural damage to several buildings, prevented firefighters from immediately determining whether people were trapped inside, Thiel said. The cause of the explosion and fire was under investigation.

"We are still not sure what the occupancy status is of the fully collapsed building," he said earlier.

"This will be an extremely risky and dangerous operation ... to perform a thorough search and hopefully rescue anybody who might be inside," the commissioner added.

For much of Thursday afternoon, firefighters sprayed water on buildings engulfed in flames, according to news footage from the scene.

Plumes of white smoke rose over a row of tenements as firefighters on adjoining rooftops tried to prevent the blaze from spreading. Neighboring buildings were evacuated and power was shut off to the area, Thiel said. More than 100 firefighters and other first responders descended on the block.

The blaze was declared under control at 2:43 p.m., fire officials said via Twitter.

'A lot of uncertainty'

Thiel said crews were dealing with an "active firefight" before commencing the search for possible trapped residents.

"We're still trying to figure out how many people occupied these buildings, where they were when this occurred," he said. "There's still a lot of uncertainty."

One damaged building is a commercial property, the commissioner said. Firefighters and police were going door-to-door to try to determine who might have been in the buildings.

On Thursday afternoon, utility crews were still digging up parts of the street to shut off gas valves, Thiel said.

Mike Dimatties and a friend said they were in a building one block away from the blaze when they thought their roof had collapsed, they told CNN affiliate KYW. A door in the building blew open and they rushed outside to see people running.

"I really hope nobody died," Dimatties said after discovering the nearby building collapse. "I hope they got them out. It felt like an earthquake."

Deli owner Mike Seccia told CNN affiliate WPVI the explosion was "the loudest bang" he ever heard. Seccia said he handed an employee a fire extinguisher and they headed to the scene. But the fire "became one of the worst spectacles I have ever seen," he told the station.

They tried reaching a man trapped in the rubble but were overcome by flames, Seccia told WPVI.

"Deeply saddened to learn of the potential loss of life and wishing for the safety of all residents and first responders," he tweeted.