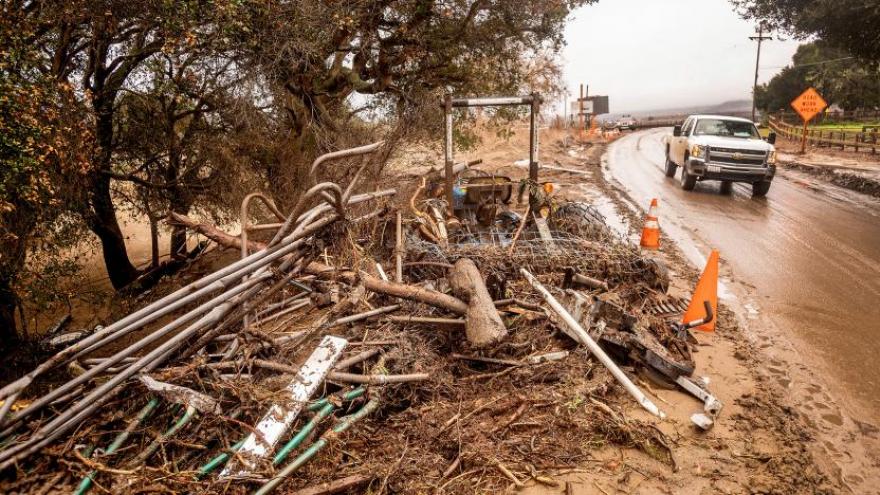 (CNN) -- A Monterey County woman was injured and 25 structures were damaged as a powerful atmospheric river-fueled storm dumped heavy rain and snow on Northern California, triggering mudslides and debris flows.

The woman was injured as she attempted to escape her home during a mudslide, Monterey County Deputy Fire Marshal Dorothy Priolo told CNN. She was treated for non-life-threatening injuries at a local hospital and has been released.

Some evacuation orders in Monterey County remain in place as flood warnings, and advisories were issued by the National Weather Service (NWS) after several inches of rain fell in the area. Continued heavy rainfall with the potential for an isolated thunderstorm is expected through the day, NWS Bay Area said in a tweet.

At least 4,000 Monterey County residents are impacted by the evacuation orders, according to Priolo.

Approximately 25 structures in the county, which includes homes and outbuildings, have been damaged by the mudslides and debris flow caused by the rain. A lot of the structures, Priolo explained, are ranch-style properties, "so even if the home was not affected, in some cases, other buildings on the property may have been."

Most impacted areas are where burn scars exist from previous wildfires -- including in Santa Cruz County, where 5,000 residents were evacuated earlier this week due to the risk of debris flow and mudslides.

The storm has also forced the closure of Interstate 80, the crucial artery linking Northern California and Nevada, over the Sierra Nevada after dumping feet of snow.

"I-80 is CLOSED eastbound at Colfax and CLOSED westbound at the Nevada state line due to multiple spin outs," the California Highway Patrol said in a tweet.

Rain and heavy snow is expected to continue this afternoon with the possibility of isolated thunderstorms, according to NWS Sacramento.