One year after the Parkland massacre 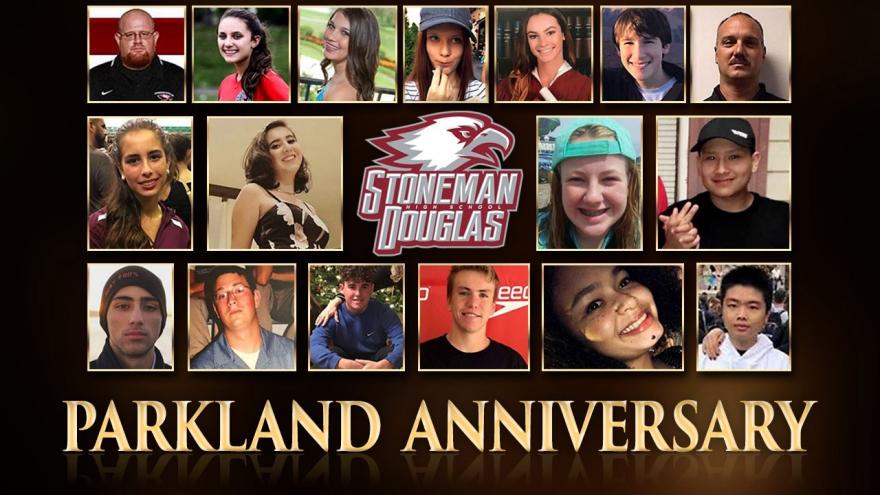 (CNN) -- Phoebe O'Mara doesn't want to be angry or depressed on Valentine's Day, which marks a year since she lost seven friends in the Marjory Stoneman Douglas High School massacre.

The shooter -- who Phoebe refers to only as "he" -- has already taken so much from her and her classmates.

"Why let him have that day, too?" the 16-year-old asked her mother.

It's not that she's trying to forget what happened on February 14, 2018, when the gunman entered the school and killed 17 students and staff. Quite the opposite. She wants to honor the victims by serving others and focusing on the heartwarming memories of those she lost.

She started in her own home, which she adorned in "LOVE" banners, fuchsia tinsel and hearts of pink, red and maroon.

"The point of it wasn't really to take back Valentine's Day, because I still think we should make it about the the students and staff that were lost," she told CNN. "I don't want to forget them. I want to put some love into it."

Phoebe won't be alone. All of Parkland -- parents, students, staff and surrounding residents touched by the tragedy -- is coming together this week to make sure their fallen Eagles aren't forgotten and that something positive comes from the worst high school shooting in American history.

What the school and the community have planned

In an e-mail to parents this week, Principal Ty Thompson, who has presided over the yearlong effort to bring what peace he can to the children in his charge, called for "a day of service and love."

"We are encouraging parents to be involved with their child on Feb. 14," he wrote. "Whether that is attending an organized service project together off campus, planning your own project that is special to your family, or simply spending some time together that day."

The school is already getting a long weekend for President's Day, but any student who misses school Thursday or Friday will have their absences excused, Thompson wrote.

It's similar to the tack taken by Colorado's Columbine High School, which has closed for a day of service every April 20 since two gunmen killed 13 people on its campus in 1999.

In addition to feeding first responders Thursday, Marjory Stoneman Douglas students and staff are asking the community to join them in a moment of silence at 10:17 a.m.

That evening, an interfaith memorial service will be held at Pine Trails Park in Parkland, which hosted a vigil the day after the shooting. On Saturday, a memorial 5K is scheduled to honor Chris Hixon, the 49-year-old athletic director, veteran and father who became one of three adults killed in the massacre as he rushed to save his students.

Surrounding communities are lending a shoulder to their tender neighbors. From Pompano Beach to Miramar, moments of silence will be observed, flags will be lowered and bells will toll. Local beaches and the Sawgrass Nature Center will hold cleanup projects, a yoga studio will offer students a day of healing, a Parkland stable will welcome students to mingle with its horses, artists will help survivors channel their grief into works of beauty and a local museum will provide massage chairs, food and a petting zoo.

Phoebe: 'I want to put more cheer into the day'

Phoebe, who was a freshman during last year's shooting and who traveled via bus to Tallahassee with her classmates to press lawmakers on gun legislation, no longer attends Marjory Stoneman Douglas.

She didn't have the best eating habits to begin with, she said, but after the shooting she developed an eating disorder. She cut short a trip to Israel because of her struggles following the shooting.

This week's commiserations will come naturally, as part of the therapy for her eating disorder involves tapping the support system of friends and family who help keep her focused on a healthy lifestyle. It's an integral part of her recovery -- along with reading, writing, art and her favorite form of therapy: stress balls.

Still, she will take a few days off and join her former classmates Thursday for the day of service. She and members of the Jewish Federation of Broward County, in which her family is heavily involved, will head to Quantum House, which provides a home for families with children suffering serious medical conditions. Phoebe plans to bring food to the center and help kids decorate either sugar cookies or cupcakes, whichever her mother decides to make.

She also will accompany her pals to Thursday evening's vigil at Pine Trails Park and, on Friday, plans to spend time with friends sharing memories of their classmates who were taken too soon.

"I want to put more cheer into the day rather than sadness," she said. "It's terrible that it happened, but it's been a year so I want to start talking about the happy things about these people and what we miss about them."