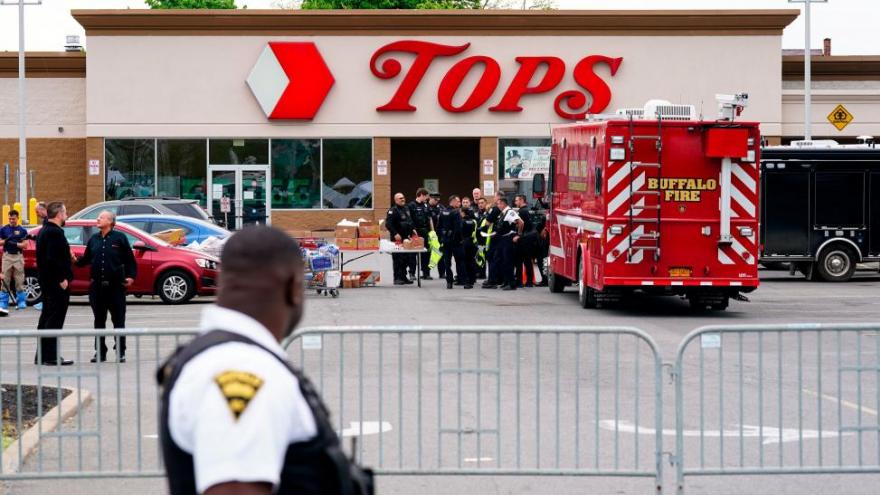 Investigators work the scene of a shooting at a supermarket in Buffalo on Monday, May 16, as social media posts by the 18-year-old White man suspected of shooting and killing 10 people at a Buffalo supermarket Saturday reveal he had been planning his attack for months.

(CNN) -- Social media posts by the 18-year-old White man suspected of shooting and killing 10 people at a Buffalo supermarket Saturday reveal he had been planning his attack for months.

Alleged gunman Payton S. Gendron of Conklin, New York, posted that he selected a particular ZIP code in Buffalo because it had the highest percentage of a Black population close enough to where he lived. Police and other officials have described the mass shooting as a hate crime.

In his posts, initially written on the chat app Discord and shared on online forum 4chan, the suspect said he visited the Tops Friendly Markets three times on March 8 to survey the layout, as well as at the times of the day when there were the most customers. He planned his attack for mid-March, the posts say, but delayed it several times.

Of the 13 people shot, authorities say, 11 were Black. The alleged gunman was taken into custody in the immediate aftermath and is under suicide watch after pleading not guilty to a first-degree murder charge, according to authorities.

• Presidential visit: President Joe Biden and first lady Jill Biden arrived in Buffalo on Tuesday to meet with the families of the shooting victims, first responders and community leaders. He is expected to deliver remarks at 1 p.m. ET and condemn the shooting as "terrorism motivated by a hateful and perverse ideology that tears at the soul of our nation," a White House official told CNN.

• Manager says she told Gendron to leave Friday: An operations manager at the market told ABC News that she saw him at the store on Friday evening and told him to leave because it looked like he was bothering customers. Gendron, sitting on a bench outside the store wearing the camouflage he would wear Saturday, left without an argument, Shonnell Harris Teague told ABC. Teague's brother, the Rev. Tim Newkirk, told The Buffalo News that Gendron was "posing as a beggar," and Teague told him he couldn't panhandle there.

• Attack would have continued elsewhere had suspect not been stopped: The suspect had other "target locations" down the street, Erie County Sheriff John Garcia said. Authorities found another rifle and a shotgun in his vehicle, said Garcia, who credited the quick arrival of two police officers with preventing other attacks.

• Writing seen on suspect's firearms: CNN has obtained a photo of two of the firearms inside the alleged gunman's vehicle that were not used in the shooting. Writing is seen on the weapons, including the phrase "White Lives Matter," as well as what appears to be the name of a victim of a crime committed by a Black suspect.

• Video shows gunman apologizing, sparing one person's life: Video obtained by CNN and filmed during the shooting shows the gunman turning his weapon on a man who is curled up on the ground near what looks like a checkout lane. The man shouts, "No," and the shooter then says "Sorry," turns and walks away. The video ends at this point and it is unknown what happened next. It's not clear why the man was apparently spared or why the gunman apologized.

• Threats made after attack: Two people have been arrested over threats made after the attack, Buffalo Mayor Byron Brown told CNN on Tuesday, without detailing the threats. On Monday, Erie County's district attorney announced the arrest of a 52-year-old man who called a pizzeria Sunday afternoon making threatening comments while referencing what happened at Tops.

Since the shooting, officials have looked at what they say was the suspect's racist intent and his history.

"We continue to investigate this case as a hate crime, a federal hate crime, and as a crime perpetrated by a racially motivated, violent extremist," Stephen Belongia, special agent in charge of the FBI Buffalo field office, said Sunday at a news conference.

The massacre follows other mass shootings in recent years in which authorities say a White supremacist suspect was motivated by racial hatred, including in El Paso, Texas, Charleston, South Carolina, and as far as Norway and New Zealand.

In a 180-page diatribe linked to the suspect, he said he subscribed to a "great replacement" theory, or the false belief that White Americans are being "replaced" by people of other races. Once a fringe idea, replacement theory has recently become a talking point for Fox News' host Tucker Carlson, as well as other prominent conservatives.

In the diatribe, Gendron said he became aware of his ideology "after extreme boredom" during the Covid-19 pandemic, and began sifting through the "politically incorrect" discussion board on 4chan, analysts with the New York Police Department said in an internal memo obtained by CNN on Tuesday.

He also wrote his beliefs came "from the internet" with "little to no influence ... by people I met in person," according to the memo.

The analysts wrote that Gendron likely became radicalized through social media and platforms such as Discord and the streaming outlet Twitch, warning that these are popular with the far right and can be effective in mobilizing violent extremists.

A year ago, the suspect landed on the radar of police as a student at Susquehanna Valley High School, officials said. Gendron had turned in a high school project about murder-suicides, leading to a state police investigation, said Garcia, the sheriff.

The Susquehanna Valley Central School District referred to it on Monday as an "ominous" reference to murder-suicide through a virtual learning platform in June. Though the threat was not specific and did not involve other students, the instructor immediately informed an administrator who escalated the matter to New York State Police, a spokesperson told CNN, adding the law limits what more school officials can say.

"The state police arrived at his house at that point last year," said Garcia. "He stayed at a facility -- I'm not sure if it was a hospital or a mental health facility -- for a day and a half."

It was not the sort of involuntary commitment that would have precluded the suspect from purchasing a weapon, state police spokesperson Beau Duffy said.

Gendron wrote about the investigation in a January post on Discord. He wrote it ended when he told investigators his writings were just a stupid thing he'd done.

"Another bad experience was when I had to go to a hospital's ER because I said the (words) "murder/suicide" to an online paper in economics class," the post reads. He claimed he "got out of it because I stuck with the story that I was getting out of class and I just stupidly wrote that down."

"That is the reason I believe I am still able to purchase guns. It was not a joke, I wrote that down because that's what I was planning to do," the post reads.

Gendron further claims that his mental health evaluation lasted just 15 minutes after he spent hours waiting in the emergency room.

The 10 people killed on Saturday ranged in age from 32 to 86, police said, among them a former police officer who tried to stop the gunman and a number of people doing their regular grocery shopping.

Sadness and frustration were still palpable among many who came to the supermarket to pay respects and show their support.

"We are a community in Buffalo. If you are a Black and brown person, you knew someone impacted," said Phylicia Dove, a local business owner and activist. "This is the impact of White supremacy. This was not a case of mental health, this is someone who targeted an impoverished community heavily concentrated with poor Black people, and caught us in our most vulnerable moment."

"I feel more insulted than anything," resident Darius Morgan told CNN. Born and raised in Buffalo, Morgan said of the gunman, "How dare you come in here? How dare you take this from us? We grew up here, this is our home, and they came in and destroyed it."

Gov. Kathy Hochul has announced $2.8 million in funding for the victims and their families, according to a statement from her office. GoFundMe has also compiled a list of verified fundraisers dedicated to helping in the wake of the tragedy.