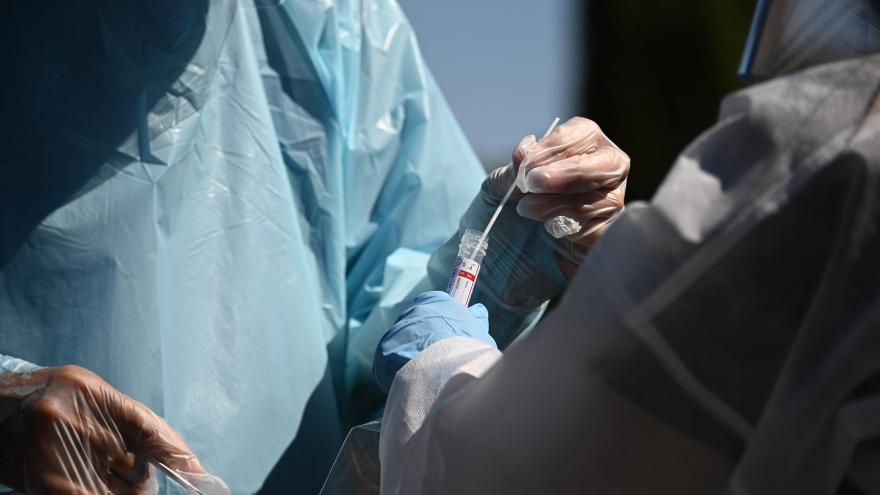 Robyn Beck/AFP via Getty Images-Healthcare workers collect a test sample from a motorist at a drive-through coronavirus (Covid-19) testing center at M.T.O. Shahmaghsoudi School of Islamic Sufism in Los Angeles, CA. As of Saturday night, new cases were down in Texas, Missouri and South Carolina, while 21 states reported a rise in cases and a little more than half held steady compared with the week before.

(CNN) -- Only three US states are reporting a decline in new Covid-19 cases compared to last week, as the country hit its highest daily rate of new cases in almost two months.

As of Saturday night, new cases were down in Texas, Missouri and South Carolina, while 21 states reported a rise in cases and a little more than half held steady compared with the week before.

Friday, there were 54,506 new reported cases, according to Johns Hopkins University, the highest single day case number since 64,601 cases were reported on August 14.

The climbing coronavirus count comes as the President joined the more than 7.3 million people who have tested positive for Covid-19 in the US, a sobering reminder of the virus' reach as health experts urge continued vigilance during the fall and winter months.

Wisconsin reported a record number of 2,892 new daily cases on Saturday, according to data from the state's department of health services. The previous record was set earlier in the week. The state's governor urged residents to "get back to the basics" of fighting the virus.

"The surges we're seeing across our state are not an indication that masks don't work. This underscores what we've said all along which is that masks only work if everyone wears them," Gov. Tony Evers said.

A surge in recent Covid-19 cases is straining resources and impacting the ability to contact trace new cases, the alert warned.

New York City Mayor Bill de Blasio on Sunday announced a proposal to close schools and non-essential businesses for at least two weeks in nine zip codes in Brooklyn and Queens that have seen test positivity higher than 3% for at least seven consecutive days.

The mayor's plan requires approval from Gov. Andrew Cuomo, but it would represent a major step back for the city's reopening efforts. New York has largely managed to contain the spread of the virus since the spring, when it was the epicenter of the coronavirus outbreak in America.

"What has become clear is that there are a number of neighborhoods now that have continued to have a high level of coronavirus positivity and that requires stronger action than we've had to take for many months," de Blasio said.

To get on top of the numbers, the US needs a more "comprehensive approach," Dr. Tom Frieden, the former director of the US Centers for Disease Control and Prevention, said Friday.

Kentucky Gov. Andy Beshear responded to the state's record high of 1,275 cases in one day with a request that everyone wear masks and a reminder that "we have to do better."

"We've got to get back to enforcing these rules because 1,275 cases are going to result in a lot of death, too," Beshear said in a video statement. He said his office would provide details on Monday on how to "step up" mask enforcement.

Experts advise who should get vaccines first

Several companies are conducting Covid-19 vaccine Phase 3 trials in the US, but when a safe and effective vaccine will be available to the US population remains uncertain.

Experts advising the federal government say frontline health care workers and those who provide health care facility services should be the first to get vaccinated, followed by people at high risk of severe illness due to underlying health conditions.

Next should come older adults living in congregate settings, like nursing homes, a National Academies of Sciences, Engineering, and Medicine committee said in a final report.

But local leaders should also give priority to vulnerable communities, the committee said. That addition comes after criticism over the group's draft report that was issued last month, which did not mention minority communities that have been hit hardest by the pandemic.

The committee recommends that within each phase of vaccinations, authorities prioritize people in high vulnerability areas, identified by a tool like the CDC's Social Vulnerability Index. The index uses US Census variables to identify communities in particular need of disaster support which the committee says considers the factors that place racial minorities at higher risk of Covid-19.

The third phase proposes vaccination for young adults, children and those in industries where people may receive some protection but are still at risk of exposure, such as banks and universities.

The final phase covers anyone who has yet to receive vaccination.

Hospitalizations rise for the first time since July

According to the Covid Tracking Project, the average number of people hospitalized for coronavirus in a week rose recently for the first time since July.

This past week saw an average of about 30,000 hospitalized -- a rise of 2.4% from the previous week, and the first jump after eight weeks of decline, CTP reported.

While daily deaths in the US are still dropping, "the decline appears to have slowed," CTP said in a Thursday blog post.

In Wisconsin, hospitalizations more than doubled last month, according to CTP.

In one part of Wisconsin, a health care professional warned the community is "nearing a crisis."

"This spike we're seeing in Brown County, Wisconsin, should be a wake-up call to anyone who lives here that our community is facing a crisis," said Dr. Paul Casey, medical director of the emergency department at Bellin Hospital in Green Bay, Wisconsin.

Wisconsin's seven-day average of new daily infections soared in recent weeks, from the high 600s and low 700s in late August to its all-time high of 2,892 on Saturday.