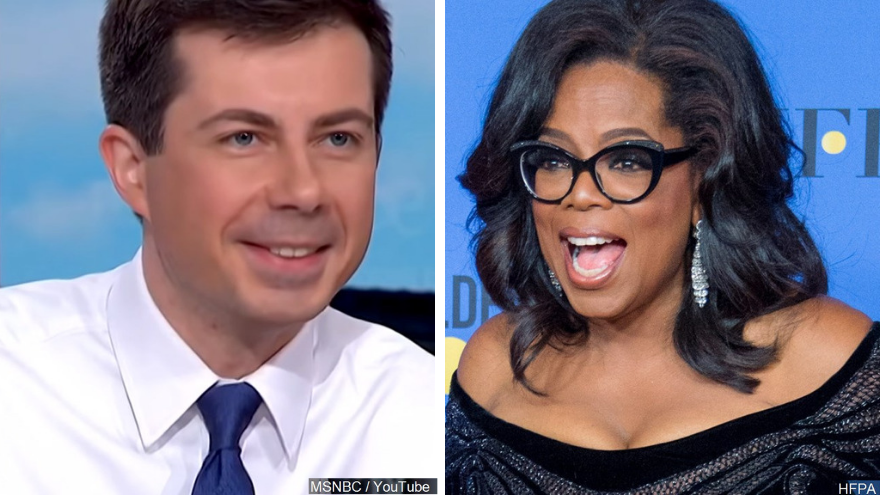 The Indiana Democrat, speaking to WGBH radio in Boston on Tuesday, celebrated the fact that the famed television host is reading his book and mentioned him in a new interview with the Hollywood Reporter.

"In the car on the way over, somebody just said that Oprah mentioned me, which is arguably a bigger deal than coming in second in a poll," said Buttigieg, who had lunch with Winfrey Sunday in Los Angeles at the home of a mutual friend, a source familiar with the meeting told CNN.

During the lengthy Hollywood Reporter interview, Oprah was asked how she would wield her influence in the 2020 election. Winfrey replied she was reading Buttigieg's memoir, "The Shortest Way Home," as part of her efforts to study the field.

"I call him Buttabeep, Buttaboop," Winfrey said of the mayor's famously difficult-to-pronounce last name. "The name's either going to really hurt or [really help] -- I think it's going to help, actually."

She said she urged director Steven Spielberg to look into Buttigieg.

"Just the other day, I was at Apple with Spielberg and we were in the hallway talking about, 'What are we going to do?' And I said, 'Have you heard of this Butta guy?' He goes, "No, Butta-who?" I go, 'Buttabeep, Buttaboop. Look him up,'" she said.

Winfrey added, after noting that she is reading about other candidates, too, that she is "quietly figuring out where I'm going to use my voice in support." Winfrey famously endorsed Barack Obama in the 2008 election.

Buttigieg has felt a boom in popularity in recent weeks, vaulting comfortably into the high single digits in most polls and raising more than $7 million in the first three months of 2019.

That rise has piqued the interest of Hollywood, where the candidate has headlined a number of fundraisers.

Buttigieg will return to Hollywood in early May when actors Gwyneth Paltrow and Bradley Whitford will host a fundraiser for the mayor.