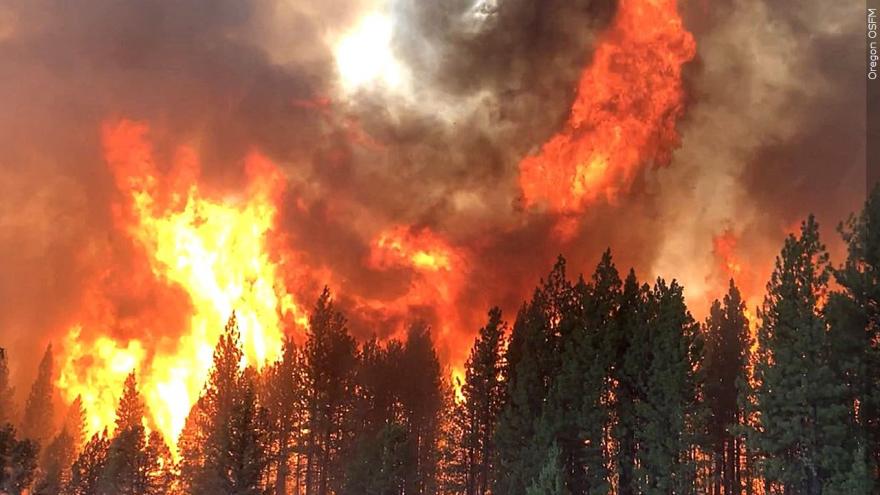 (CNN) -- Oregon and Washington state have moved into the highest level of wildfire preparedness as the largest wildfire in the United States continues to scorch hundreds of thousands of acres.

The states climbed early Wednesday to Preparedness Level 5, or PL5, meaning places could experience "complex wildland fire incidents, which have the potential to exhaust national wildland firefighting resources," according to guidance from the National Interagency Fire Center. The Northwest Interagency Coordination Center announced the hike in alert status just three days after increasing it to PL4.

The most threatening wildfire in the region is the Bootleg Fire in southwestern Oregon's Fremont-Winema National Forest. Of dozens of wildfires burning amid the West's severe drought and heat waves -- induced by the climate crisis, scientists say -- the Bootleg Fire is now the largest, Daniel Omdal, spokesperson on Northwest Incident Management Team 10 told CNN.

It has charred more than 200,000 acres since starting July 6, according to the federal InciWeb wildfire tracking site. And it is more than twice the size of the next largest fire, the Johnson Fire in New Mexico, Omdal said.

The Bootleg Fire "remains very active with significant acreage increases due to hot, dry, and breezy conditions. Poor humidity recovery at night is contributing to active fire spread through the night time period. Robust spread rates are being generated by drought-affected fuels. Expecting similar conditions for the next several days," according to InciWeb.

Winds and lightning could make efforts to fight the Bootleg Fire difficult, CNN meteorologist Michael Guy predicted. And while temperatures are expected to be slightly lower than they have been, they will continue to be high, ranging from 95 to 105 degrees Fahrenheit.

"Conditions will remain dry, with smoke from the fires inundating the region," Guy said, adding that air quality alerts are in place for that area.

Overall, 67 large fires have scorched more than 900,000 acres across 12 states, the latest data from the fire center shows.

Wildfires ravage land across the West

Between January 1 and Tuesday, more than 2 million acres have burned in 33,953 fires, exceeding last year's figures for the same period, according to the NIFC.

In California, fires have scorched tens of thousands of acres, more than doubling the area burned in the same time frame last year.

The Beckwourth Complex Fire, the state's largest, has burned more than 90,000 acres so far and was 66% contained Wednesday.

"While wildfires are a natural part of California's landscape, the fire season in California and across the West is starting earlier and ending later each year. Climate change is considered a key driver of this trend," Cal Fire said on its website. "The length of fire season is estimated to have increased by 75 days across the Sierras and seems to correspond with an increase in the extent of forest fires across the state."

Meantime in Arizona, the Cedar Basin Fire was ignited July 9 by lighting about 14 miles northeast of Wikieup and 20 miles northwest of Bagdad. And in New Mexico, the Johnson Fire was sparked by lighting May 20, burning more than 88,000 acres since then.