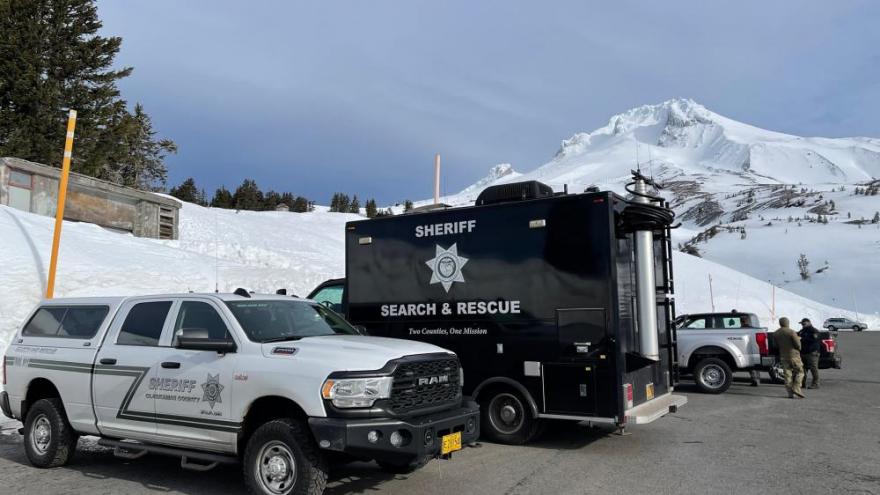 Rescuers worked in challenging conditions to reach the climbers who fell about 200 feet on Mount Hood Sunday.

(CNN) -- One person died and another was injured after suffering a steep fall on Oregon's Mount Hood, where deep snow and avalanche conditions hindered the two-day rescue effort, officials said.

Lei Wang, 50, and Pradnya Mohite, 34, fell about 200 feet in the Leuthold Couloir area of the mountain shortly after 5 p.m. Sunday and were seriously injured, the Clackamas County Sheriff's Office said.

"One of the injured climbers was able to call 911 by cell phone, and also used a Garmin inReach device to notify an emergency contact," Deputy John Wildhaber, a spokesperson for the sheriff's office, said Monday in news release.

A rescue effort was launched, but conditions "were extremely challenging," Wildhaber said.

Rescuers attempted to reach the climbers during the night but high winds, including 50 mph gusts, "knocked rescuers off their feet," Wildhaber said. "The snow was deep and heavily wind-loaded, so with every upward step, rescuers sunk to their upper thighs."

Crews made it to within 700 feet of the injured climbers by 11:40 p.m. Sunday but were unable to reach them, the release said.

Mohite was declared dead on the mountain and Wang was taken to a hospital for treatment, Wildhaber said.

"Due to the severe avalanche hazard and poor conditions, rescuers made the tough decision to leave the deceased on the mountain," the Monday news release said. A recovery mission will take place when conditions improve, officials said.

Four teams consisting of 32 rescuers were involved in the Monday rescue effort, in addition to volunteers providing support, the release said.

"There were at least two natural-release avalanche events on Mt. Hood on March 7, the second day of the search, underscoring the concern for rescuer safety," the release said.