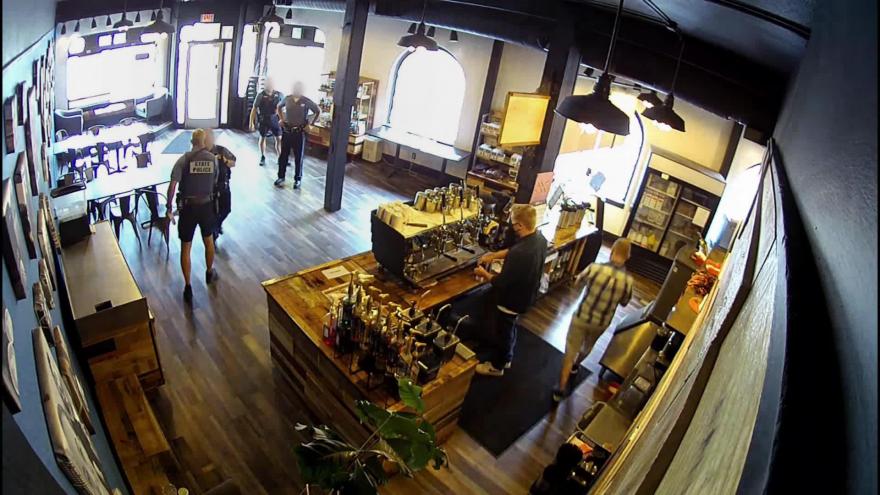 (CNN) -- An Oregon state trooper is on administrative leave and officials have apologized after coffee shop owners say the trooper used profanity and scoffed at the state's mask mandate when he and other officers were asked to wear one.

According to the Morgans, when the troopers were asked to put on masks, one officer "used profanity to disparage the Governor and express his political opinion that the Governor could not infringe on his civil liberties and that businesses need not worry about complying with the order because law enforcement would not be enforcing the order."

Oregon State Police Captain Timothy Fox told CNN in an email that the trooper who allegedly made those statements is currently on administrative leave. An internal investigation is currently being conducted and the officers are not being named at this time, he said.

The Morgans sent CNN surveillance video of the incident showing the officers without masks on while two employees are seen wearing masks. Other patrons are seen on the video entering, some with masks and some without.

The four officers entered without masks around 8:30 a.m. on July 1 and sat down in the shop with no masks after purchasing beverages.

"We were aware of the divisive climate during this time and the fact that face coverings have become a politicized issue so we expected that our employees may receive some backlash from customers regarding this new policy," the statement from the owners said.

"However, we did not expect that within the first hour of the state mandate four uniformed State Police Officers would defy the orders, enter our cafe without wearing a face mask and refuse requests to wear one."

Hampton, the state police superintendent, called the conduct "embarrassing and indefensible, especially in the wake of thousands of Oregonians taking to the streets each day to rightfully demand police accountability. Like any police misconduct, the actions of a few bring discredit to the scores of dedicated officers that do not believe they are above the law they are sworn to uphold."

Hampton apologized in his statement for the actions of the troopers and said they will be held accountable, although he didn't specify whether they were receiving disciplinary action and what the action would be.

In a Facebook post Friday, Gov. Brown said she invited three of the troopers to meet with her.

"We talked about kids, our families, and the importance of setting a good example. They took responsibility and expressed real regret for their actions. And they pledged to do better," she wrote.