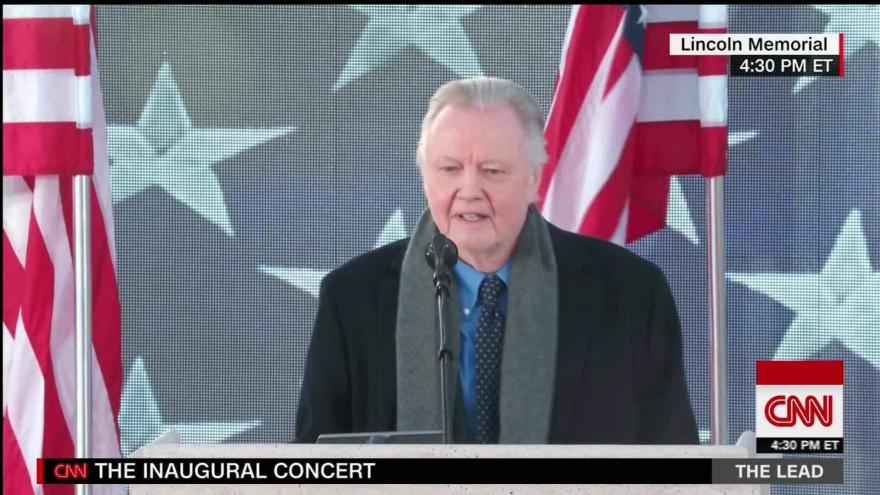 (CNN) -- Oscar-winning actor Jon Voight has posted a pair of videos to Twitter in which he affirms his long-held support for President Donald Trump and calls him "the greatest president since Abraham Lincoln."

The star of "Midnight Cowboy" and "Transformers" addresses his remarks to "the people of the Republican Party," saying in the two-part video that Trump "has made his every move correct" and that "our country is stronger, safer and with more jobs" with him at the helm.

"This job is not easy, for he's battling the left and their absurd words of destruction," Voight, 80, said. "Our nation has been built on the solid ground from our forefathers, and there is a moral code of duty that has been passed on from President Lincoln."

The videos, which together run a little longer than a minute, were posted Friday night to Voight's account.

Voight invoked Lincoln regarding Trump in 2017

It wasn't the first time Voight has publicly linked Trump and Lincoln, the nation's 16th president, who issued the Emancipation Proclamation and ended the Civil War.

Speaking at an inauguration rally in January 2017 on the steps of the Lincoln Memorial in Washington, Voight said, "God answered all our prayers" by granting Trump the White House, The Hill reported.

"And President Lincoln, who sits here with us," Voight said, "I'm sure is smiling knowing America will be saved by an honest and good man who will work for all the people, no matter their creed or color."

Voight was among Trump's early celebrity supporters, telling the conservative website, Breitbart News, in March 2016, "Donald is funny, playful, and colorful, but most of all, he is honest."

"He has no bull to sell, and everyone will discover the bull most politicians spew out is for their own causes and benefits," Voight said in a statement to the site at the time.

After a little more than two years in office, Trump had uttered more than 10,000 false or misleading claims, according to The Washington Post Fact Checker.

Trump in March announced the appointment of Voight as a trustee of the John F. Kennedy Center for the Performing Arts, serving through 2024.