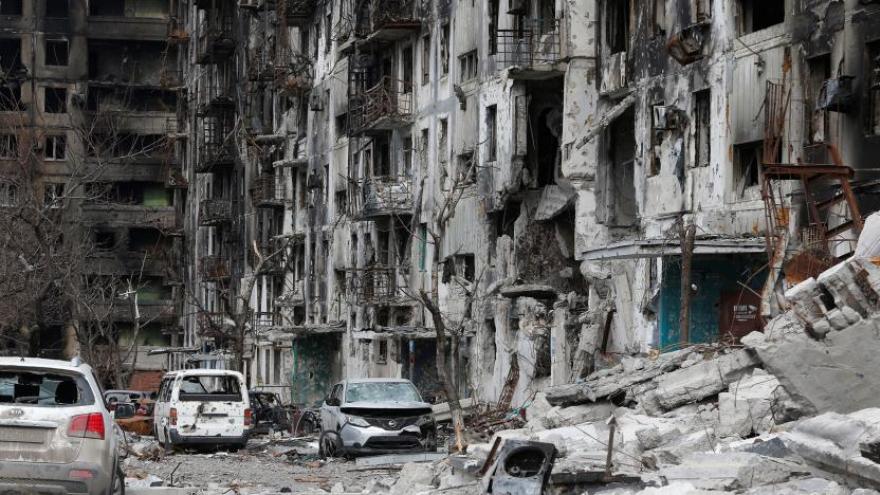 An OSCE report finds 'clear patterns' of violations of international humanitarian law by Russian forces in Ukraine. Apartment buildings are shown destroyed in the besieged southern port city of Mariupol, Ukraine, on April 3.

(CNN) -- An expert report from the Organization for Security and Cooperation in Europe (OSCE) found "clear patterns" of violations of international humanitarian law by Russian forces in Ukraine and detailed numerous incidents that it says could constitute war crimes.

The report says it found "credible evidence" suggesting violations of "even the most fundamental human rights (right to life, prohibition of torture and other inhuman and degrading treatment and punishment) have been committed, mostly in the areas under the effective control of Russia or entities under overall control of Russia."

In a statement at the OSCE on Wednesday, US Ambassador Michael Carpenter said that "taken as a whole, the report documents the catalog of inhumanity perpetrated by Russia's forces in Ukraine."

"The report is powerful in documenting the sheer scope of the Russian government's cruelty," Carpenter said.

It includes reports of a Ukrainian interpreter who was "held in captivity for nine days" by Russian forces. Left in an icy cellar, he was repeatedly beaten with an iron bar and rifle butts, tortured with electricity, deprived of food for 48 hours and subjected to a mock execution.

For many of the incidents, the report says they would constitute war crimes, but does not fully declare them as such. On the attack on the maternity hospital in Mariupol, however, it states: "This attack therefore constitutes a clear violation of (international humanitarian law) and those responsible for it have committed a war crime."

"While it may be that one hospital was used by the defender for military purposes or destroyed by mistake, it is hardly possible that this is the case when 50 hospitals are destroyed," the report states.

The report was the result of a three-week-long fact-finding mission by the three OSCE experts, and covers the time period from the start of the war on February 24 to April 1. The report notes that the experts faced a number of limitations -- time and resource constraints, lack of access to Ukraine -- so "a detailed assessment of most allegations of IHL violations and the identification of war crimes and crimes against humanity concerning particular incidents has not been possible."

However, "it is not conceivable that so many civilians would have been killed and injured and so many civilian objects, including houses, hospitals, cultural property, schools, multi-story residential buildings, administrative buildings, penitentiary institutions, police stations, water stations and electricity systems would have been damaged or destroyed if Russia had respected its (international humanitarian law) obligations in terms of distinction, proportionality and precautions in conducting hostilities in Ukraine," it notes.

The report did not cover the time period when developments like the atrocities in Bucha came to light, which it says "require serious national and international enquiries, on the spot, with forensic experts." It states that "if confirmed, such killings would constitute egregious violations of (international humanitarian law) and war crimes."

The report says that "violations occurred on the Ukrainian as well as on the Russian side."

"The violations committed by the Russian Federation, however, are by far larger in nature and scale," it adds. Most of the reported violations by Ukraine are related to the treatment of Russian soldiers.

The report also notes that Russia, which is a member of the OSCE, did not participate in the fact-finding mission.

The fact-finding mission that was used to produce the report was launched after 45 countries triggered the rarely-used Moscow Mechanism. It is a serious step, and according to the OSCE, it has been triggered only nine other times since its establishment in 1991. It was most recently used in 2020 to investigate human rights abuses in Belarus.