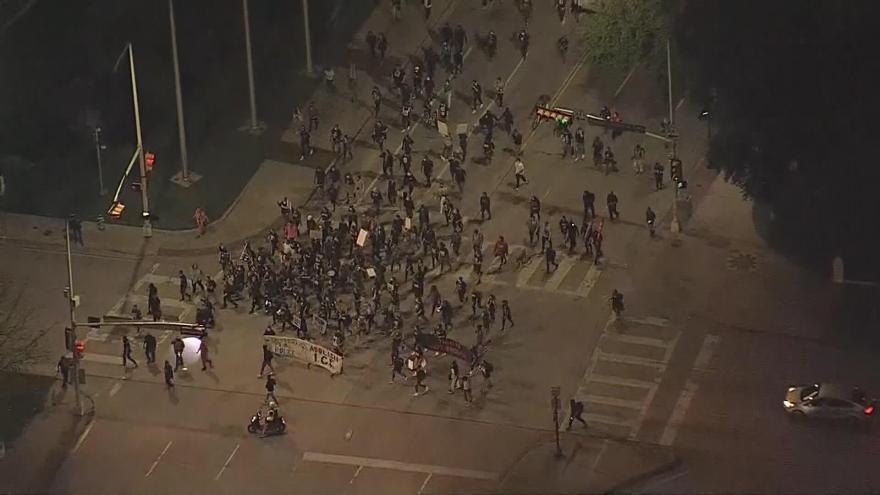 **Embargo: Dallas, TX** Protesters take to the streets in Dallas, Texas on Sept. 23 following the news that none of the three officers involved in Breonna Taylor's death were charged with her killing.

(CNN) -- Outrage and heartbreak boiled over into protests in cities across the US on Wednesday after news broke that none of the three officers involved in Breonna Taylor's death were charged with her killing.

More than six months after Taylor was shot to death after Louisville police officers broke down the door to her apartment while executing a warrant, a grand jury decided to indict only one of the three officers involved on first-degree wanton endangerment charges. The charge applies to the risk put on Taylor's neighbors but does not aim to hold the officer responsible for her death.

From Louisville to Los Angeles, Atlanta and New York, masses of people congregated to protest the decision. Police in Portland declared protests outside the justice center there a riot. And in Seattle, 13 people were arrested after a night of fires and protesters throwing glass bottles and fireworks at police, authorities said.

"We will go to our graves proclaiming that Breonna Taylor did not get justice from the Kentucky attorney general's office," Taylor family lawyer Ben Crump told CNN on Wednesday.

Taylor, a 26-year-old Black emergency room technician and aspiring nurse, was described by relatives as a hard-working, goal-oriented young woman who put an emphasis on family. Crump called demonstrations over her death "righteous anger."

Former Det. Brett Hankison was booked in the Shelby County Jail on Wednesday and later released after posting bond, his attorney told CNN. His bail was set at $15,000, an indictment released earlier said.

Shortly before it began, gunfire rang out near one of the marches in the city, according to video from the scene and reports.

Two responding officers were shot and suffered non-life-threatening wounds, Interim Police Chief Robert Schroeder told reporters. A suspect was in custody and one officer was in surgery, he said late Wednesday.

Police were starting to move forward as three apparent flash bangs were fired into the air toward protesters, a video livestreamed by the Louisville Metro Police Department shows. Nine shots are heard in videos taken by police and Regg Inkagnedo, who also livestreamed the moment.

Shots are also heard on a third video obtained by CNN. In that footage, officers quickly approach an ambulance and apparently load an injured person into it, the video by CNN affiliate Spectrum News 1 Kentucky reporter Khyati Patel shows.

The FBI Louisville office is asking for the public to submit any videos related to the shooting of the officers, according to a post on the FBI's website.

Meanwhile in Denver, a suspect was detained after a vehicle was driven into a protest Wednesday night, police said. There were no injuries, they said in a tweet.

At least one person was knocked to the ground in the protest that had been peaceful until the vehicle rammed the crowd, CNN affiliate KCNC reported.

The incident that ended Taylor's life began with a narcotics investigation on March 13.

Hankison, Sgt. John Mattingly and Det. Myles Cosgrove were executing a search warrant on Taylor's home, though her ex-boyfriend was the focus of the probe. Her ex-boyfriend was later arrested on drug charges and told a Kentucky newspaper that she had nothing to do with the probe into an alleged drug trade that spurred the warrant.

Taylor was sleeping next to her boyfriend, Kenneth Walker III, in the early hours of March 13, when they heard a noise. They both got up and walked to the door.

Police forced entry into the home, and Walker said he couldn't see but he fired one shot. After entering, Mattingly was shot in the leg, Attorney General Daniel Cameron said Wednesday.

The chaotic police operation that night was exacerbated by Hankison, who was accused by his own department of "blindly" firing 10 bullets into Taylor's apartment from an outdoor patio. Hankison was fired in June, the Louisville police chief said, but he is appealing his termination. His attorney, David Leightty, has declined to comment.

Cameron argued the officers were "justified in their use of force" because Taylor's boyfriend fired first.

"I've defended multiple homicide cases with self-defense as a defense," Romines said. "My clients don't get the benefit of the prosecutor saying, 'We're not even going to charge them; it was justified.'"

"We have to present our evidence to a jury and let a jury decide if they were acting in self-defense or not," he said.

Charges aren't related to her death

Hankison was charged with endangering not Taylor's life but those of the people in the next apartment, Crump said.

The decision was an insult to Taylor's family and an outrage to the community, he said.

First-degree wanton endangerment is a Class D felony, the lowest of four classes of felonies. The maximum sentence is five years; the minimum is one year.

The NAACP in a statement said the justice system "failed" Taylor and the charges against one officer do "not go far enough."

"The decision before my office is not to decide if the loss of Breonna Taylor's life was a tragedy," said Cameron, the first Black person to serve as the state's attorney general and a rising Republican star. "The answer to that question is unequivocally yes."

Cameron called Taylor's death "a gut-wrenching, emotional case." He defended the length of the investigation, saying the time reflected "how important it was to get this right."