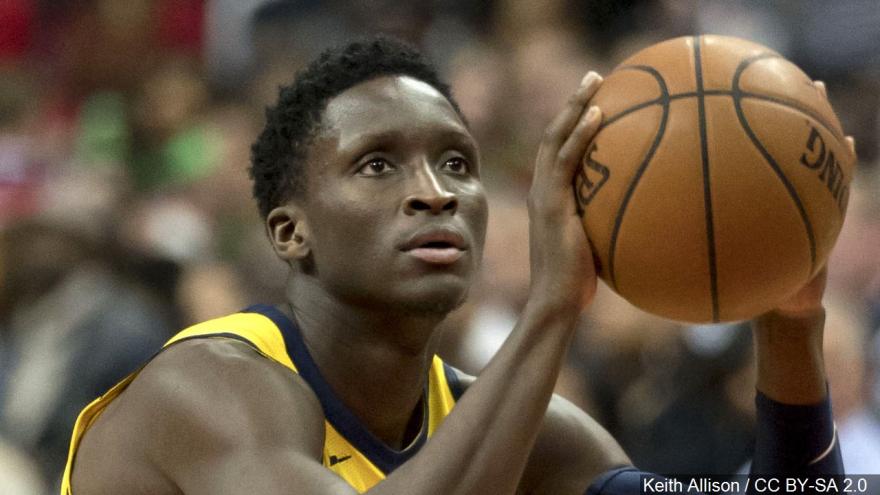 INDIANAPOLIS (AP) — Indiana All-Star guard Victor Oladipo is out for the season with a ruptured quad tendon in his right knee.

Oladipo was injured during Wednesday night's 110-106 victory over Toronto and left the court on a stretcher with 4:05 left in the first half.

Team officials acknowledged during the game that the injury was serious but waited until after the results of Thursday's MRI returned to announce how much time he would miss. Coach Nate McMillan said he was unsure when Oladipo would have surgery or whether he would be ready for the start of next season.

"It's unfortunate. He's a special player and a special person," McMillan said. "It will be tough but we have to continue to move on."

Losing Oladipo is an enormous blow to the Pacers' postseason hopes. He led the Pacers in scoring at 19.2 points per game, was a first-team all-NBA defensive selection last season and is a co-captain of the team

Indiana currently holds the No. 3 seed in the Eastern Conference but the Pacers face a more challenging second half of the season.

They surprised the league last year when many projected them to be a lottery team after trading All-Star Paul George to Oklahoma City for Oladipo and Domantas Sabonis. Instead, the Pacers made the playoffs as one of the season's biggest surprises.

Oladipo's teammates are convinced they can do it again.

"The season's not over," Darren Collison said a few minutes after players were told the extent of Oladipo's injury. "They don't know our mindset in the locker room. They don't know what we have."

Indiana went 7-4 when Oladipo missed 11 games earlier this season with a sore right knee. McMillan said he had not been told whether the previous knee problem had any relationship to the new injury.

"I haven't talked to the trainers about it, but he wasn't complaining before last night," McMillan said, though Oladipo appeared to be favoring the knee as recently as last week.

Oladipo was hurt as he scrambled back to defend an outlet pass to Toronto's Pascal Siakam and crumpled to the floor awkwardly. Trainers quickly draped a towel over the leg and players from both teams surrounded Oladipo while he was down.  Oladipo received a standing ovation as he was wheeled away and responded by waving to the crowd.

"We kind of knew last night," McMillan said. "But we got the word this morning."

McMillan said Tyreke Evans will replace Oladipo in the starting lineup and first-round draft pick Aaron Holiday will get more playing time off the bench. In addition, the Pacers intend to promote Edmond Sumner from the G-League to the playing roster.

They could still make a move before the Feb. 7 trade deadline.