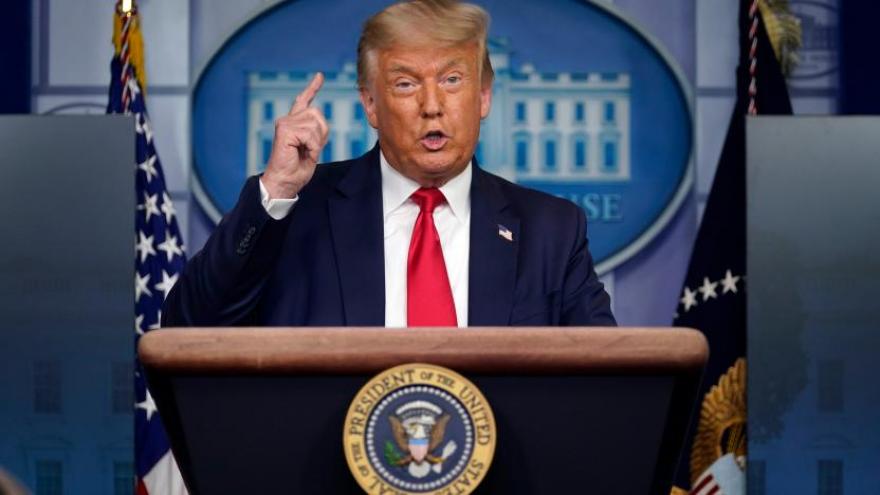 President Donald Trump speaks during a news conference at the White House, Tuesday, July 28, 2020, in Washington.

(CNN) -- President Donald Trump's day trip to Texas on Wednesday -- meant to highlight American energy and raise campaign cash -- was overshadowed by the coronavirus pandemic before Air Force One even got off the ground.

One of the passengers who was supposed to join the President, Republican Rep. Louie Gohmert, tested positive during a pre-flight screening at the White House.

Another Republican congressional candidate who was due to greet Trump at the airport also learned he was positive hours before the scheduled handshake.

And the state Trump is visiting has seen a surge in cases, forcing the Republican governor there to reimpose some restrictions in an attempt to contain the virus.

Trump had hoped to use his visit to West Texas to highlight his record in rolling back regulations, encouraging investment in energy infrastructure and promoting American energy production -- along with working to secure votes in a state he won decisively in 2016 but where polls now show a narrow contest with former Vice President Joe Biden.

But the realities of the pandemic remain ever-present even as Trump encourages states to reopen and undercuts the health experts in his administration.

When he descended from Air Force One, Trump wasn't wearing a mask, despite previously saying that Americans should wear them when socially distancing is impossible.

Most of the people he met on the tarmac were wearing masks, though his onetime physician and now-candidate for Congress, Dr. Ronny Jackson, was seen without one.

Removed from the trip because of his positive test, Gohmert instead told a Texas interviewer that it was his mask's fault he caught coronavirus.

"We're bound to put some virus on the mask that I sucked in," he told a local television station in an interview. "That's most likely what happened."

Incorrectly wearing a mask, including touching and adjusting it in public, can lead to exposure to the virus. Face masks are most effective when wearers do not touch their faces or move the mask around when using it. But Gohmert's claim that such a scenario is "most likely" how he was infected is questionable, as experts say the virus primarily spreads during person-to-person contact.

Another Republican set to be with Trump said he also tested positive before meeting the President.

"This morning on the way to Midland, I tested positive for COVID-19. I immediately rented a car and am driving back to Houston. I remain asymptomatic and feel in perfect health," Wesley Hunt, a Republican running for Congress in Texas, wrote on Twitter.

Hunt was on a list distributed by the White House of people greeting Trump at the airport in Midland but he did not appear on the tarmac.

In Texas, Trump toured and delivered remarks at a Double Eagle Energy oil rig and touted his administration's energy policies. The company is one of the largest crude oil and natural gas operations in the Permian Basin.

Like almost all of his official events lately, Trump's speech turned into an attack on Democrats -- both their energy policies and a general accusation "they want to uproot and demolish every American value."

"They want to destroy our country. These people are sick. And you better get used to hearing it," Trump said.

The Midland, Texas, oil rig was the first that Trump has visited as president. The city is where former President George W. Bush was raised. His wife, former first lady Laura Bush, was born in Midland.

Earlier in the day, Trump headlined a fundraising lunch in Odessa, where the most expensive tickets went for $100,000.

Like all events he attends, the participants who come into close proximity with Trump were likely be tested for coronavirus. Texas has seen a surge in cases, placing it near the top of states by number of confirmed cases.

Trump's handling of the coronavirus response has caused his poll numbers to plummet, including in Texas. A Quinnipiac University statewide poll released last week showed Biden and Trump in a dead heat, even though Trump won Texas by 9 points in 2016.

Trump said Wednesday that Democrats would have a difficult time competing in Texas with policies that favor renewable energy over fossil fuels.

"How do you think that works in Texas? No fracking, no drilling, no oil? Is that OK?" Trump asked the supportive crowd. "I don't think Biden's gonna do well in Texas. He's already written it off."

To counter his slide in the polls, Trump's aides have recently attempted to recalibrate his approach, reviving daily White House briefings and persuading Trump to promote mask-wearing and social distancing.

But he continues to tout unproven theories and undercut some of the administration's health experts, including by promoting an anti-malarial that has not been shown to be effective against coronavirus.

One of the people who has backed Trump up in his efforts to promote hydroxychloroquine is Jackson, his former White House physician, who is currently running for Congress in Texas. During his campaign he has downplayed the necessity of wearing masks.

Jackson was on hand on Wednesday to meet Trump when he arrived in Texas.