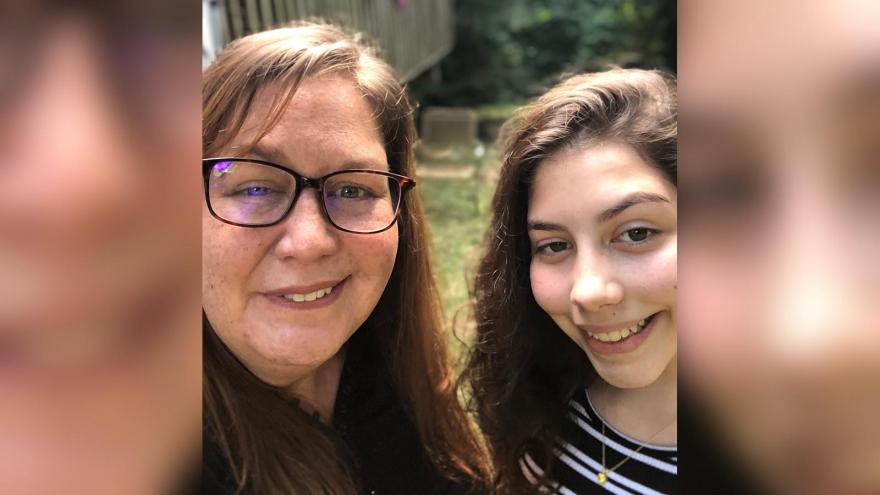 Jenn Schestopol (left)decided to create a Facebook group for several families in her area to come up with options other than returning children to school.

(CNN) -- Instead of sending his children back to school this fall, Jared Rich wants to create a new kind of learning system.

He'd group his 3 and 4-year-old boys with several other students their age and, along with the other families' help, rent out a space -- perhaps a vacant Brooklyn storefront -- to transform it into a temporary classroom. They'd hire a teacher and maybe arrange for a nurse to come in several times a week to conduct Covid-19 tests and check for symptoms.

"Essentially, you're creating a small bubble for your children to be with other children so they can maintain social interaction with human beings while being educated," he said. "As a parent, (you) want to do the best for your kid and want them to live a semi- normal life, to develop semi-normally. In such crucial developmental years, it's hard, it's horrifying."

His idea, he says, may sound like a pipe dream, but so does allowing his children to return to a school setting any time soon.

It's a harsh reality that parents across the country have had to face in the past several weeks. With back-to-school season quickly approaching and many districts still weighing their options, families who don't want to send their children into school buildings have been forced to get creative to find schooling options that work for them.

Some parents are beginning to form groups in hopes of collectively hiring a teacher for home school. Other families have opted to create rotating virtual learning groups which will meet at a different student's home each day of the week. Other parents are recruiting neighborhood volunteers, like college students, to help supplement their children's virtual instruction with some time outside or activities. And other families are exploring more nature-based approaches, hoping to find ways to get their children off the screen.

"We need creative solutions for what we're going to be doing with our kids because it seems inevitable that the institutional learning and the big school buildings are not going to be able to function in the next couple of months," Rich says.

Parents feel 'backed into a corner'

As she watched new cases of the virus rise in Georgia and awaited a decision from her daughter's school district about its plan for the fall, Jenn Schestopol decided to create a Facebook group for several families in her area to come up with options other than returning children to school.

In three weeks, that group grew to more than 3,380 members.

"It's just beyond frustrating and I think that's what a lot of people in our group are starting to feel like," Schestopol, a single mom and teacher, said. "They are feeling backed into a corner."

Some of the options the group offers include virtual learning groups -- which families will take turns hosting as groups of students tune in to their online lessons together. Other parents, including Schestopol, are looking to boost their children's online lessons with after-school study groups with two or three other students from the area.

But many of the group's members don't want to opt for their county's virtual learning option, Schestopol says, which would keep students in front of a computer for several hours each day.

Other families simply can't, she says -- including those who don't have reliable internet connections, enough devices or who have children with disabilities. According to the National Center for Education Statistics, students with disabilities make up about 14% of US public school enrollment. And according to a survey from the Pew Research Center, Americans with disabilities reported being less comfortable using technology and in a separate survey, 23% said they never go online.

"We widen this gap between the haves and the have nots," Schestopol said. "The kids are going to have a different educational experience."

In Florida, Erin, who didn't want to share her last name for privacy concerns, has been raising her 8-year-old granddaughter, who she says was diagnosed as "learning disabled."

"As it was described to us 'her filing cabinet in her memory is dissorganized.' She struggles retaining information," the third-grader's grandmother says. " And she has some speech and language deficiencies."

To keep up with their granddaughter's virtual school in the fall, Erin, who works full-time from home, and her husband, who works overnight, have coordinated with their school's speech and language therapist and have already mapped out their days.

Breakfast comes before their granddaughter wakes up, and once the third grader's lessons begin in the morning, Erin will transfer her "office," she says, to the dining room, to work side by side with the student and help with her lessons. During her job's hour-long lunch break, they tackle the harder subjects and once her husband wakes up at noon, he picks up teaching duties. In the afternoon, they together opt for something fun: a walk, a swim or an art project.

"It's going to take a lot of time management and balance," she says. "There is constant guilt that we're not doing enough. I think we, as parents of disabled kids and kids without learning disabilities, really need to remember we're doing the best we can and that's all we can do."

Creating options for everyone

Schestopol and Jessica Bergeron, who helps moderate the Facebook group in Georgia, created a "massive spreadsheet" to track families in several areas looking to form student groups and pool money for an instructor.

The two sort the groups by area and grade levels and then help hunt for educators who have the necessary credentials to teach. Once families find each other, they pick it up from there, deciding on a house to host the lessons and sorting through the instructor options they have.

In other cases, parents who don't want to hire an instructor -- or perhaps can't afford one -- are scrambling to transform into educators themselves. Some parents working from home are organizing efforts to split teaching duties throughout the week as the student groups rotate households.

"My group is probably not going to get a teacher because, being totally honest, we can't afford that," Bergeron says. "I don't have private school money and that's one reason why my kids don't go to private school."

Bergeron is exploring a co-op homeschooling option for her son who is in fourth grade. She would have to un-enroll him from the public school he currently attends and says she's offered to teach one day a week and bring together a curriculum while other parents in her group would pick up teaching during other days of the week.

It hasn't been an easy task to keep up with parents' searches, the women say, but it's something the Facebook group's families need.

'Trying to lower the goal posts'

In Silver Spring, Maryland, Rosemary Murrain recalls the difficult first days of school shutdowns months ago. Murrain and her husband worked full-time from home while they attempted to help their three children -- ages 5, 7 and 9 -- transition to virtual instruction.

But making it work proved impossible. The children all had to be logged on to Zoom meetings at the same time each morning, as the two parents clocked into work. And without much experience on computers prior to the spring, the students struggled to operate laptops on their own, she says.

"At the end of the second week we just said, 'forget it, it's not worth it.' And stopped," she said. "It wasn't really a tough decision because we just couldn't do it. We had to work. That was clear. And they didn't like the online program and in order for them to do it, we would have to sit next to them ... and help them do it."

Their school district has announced it'll be starting off the new year 100% online, she says. Murrain and her husband are brainstorming ways to create an easier schedule for their children and for the both of them, where they could trade off responsibilities and keep their children occupied.

They've opted for a more holistic approach this year. While they say they'll likely still tune in to their school's virtual instruction, the Murrains will likely supplement it with more reading, math, art and outdoor activities as well as "outdoor writing lessons" that a friend has offered to conduct for their family.

"I won't feel so much pressure to do what the school's offering as I did at the beginning of the lockdown, which just made me upset and feel like a failure," she said. "But to really think more about who my kids are, what they need and what we can provide. That's kind of my, sort of our goalposts. And then think about the basic skills that we can try to promote."

"We send our kids to public school and so we have not budgeted for hundreds and hundreds of dollars of private tutoring, nor could we do that," she said."I'm just trying to kind of lower the goalposts to something that's reasonable."

Interest in other ways of learning skyrockets

As parents look for more flexible options, interest in homeschooling "literally exploded" across the country in the past few weeks, says J. Allen Weston, the executive director of the National Home School Association.

"We've had to expand our inbox three times, thinking each time that well, 'we can't possibly go past that capacity,'" he said. "We've never seen anything like it."

The surge in interest, he says, has been a pleasant surprise.

"We thought it was going to take years to get to this point where people were really going to wake up and see the benefits of the home schooling," he says. "And now all of a sudden they're thrust into it. Unfortunately, a lot of people feel like they're doing homeschooling because they're schooling at home and that's not homeschooling at all."

The difference, Weston says, is the flexibility. The organization helps families pick from dozens of different curricula to match their needs, some of which are faith-based, while others include more activities and others focus on textbook material. The students aren't forced onto a screen for hours each day, and instead, spend more time pursuing the subjects that interest them, Weston added.

And similar to what parents in Schestopol's group are forming, he says the association has also set up "pods," to help families who live near one another form groups and take turns hosting children in their home.

In Florida, Ayana Verdi, a mother of two, says she's also tracked a surge in interest from parents in her nature-based approach to education.

The Verdi EcoSchool, which brands itself as an urban farm school, prides itself in pushing students to explore academic concepts in settings other than the classroom, through activities like gardening and cooking. Courses in the program include learning how to make a budget, coming up with business plans and learning about clean eating.

"What I would suggest is banding together with a like-minded group of families and beginning a co-op, especially in early childhood co-ops are common. We see them a lot, especially in the Northeast, where parents felt that there was an experience that they could create that is not currently offered by the traditional or conventional educational system and have struck out on a path to start it on their own," Verdi said.

"For those parents who maybe don't have access to a co-op or a group of parents willing to start a co-op ... there are lots and lots and lots of organizations online who are willing to teach you what you need to know."