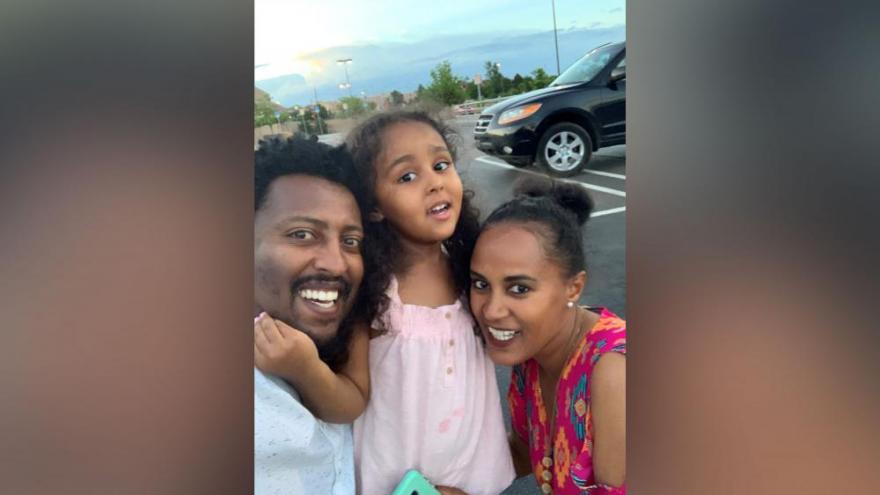 Dagne and Rahel Estifanos pose with their daughter, Wongel.

(CNN) -- The parents of a 6-year-old who died on a free-fall ride at a Colorado amusement park in September have filed a wrongful death lawsuit against the park, according to their attorney.

Wongel Estifanos died at the Glenwood Caverns Adventure Park on September 5 after "operators did not notice she was sitting on top of both seat belts," according to a state report.

"Today the parents of Wongel Estifanos took the first step in their battle for the full truth and full accountability from the amusement park that killed their beloved 6-year-old daughter," attorney Dan Caplis said on behalf of the parents in a statement released to CNN.

The lawsuit, filed Thursday in Denver district court, names the amusement park as the sole defendant and claims Wongel was killed by "extreme recklessness." According to the lawsuit, her parents are seeking "economic and non-economic wrongful death damages past and future."

The lawsuit alleges that not only did Glenwood Caverns and the operators know that they did not properly belt Wongel into the ride but that before Wongel's death, Glenwood Caverns had knowledge that its operators were failing to put seat belts on some of their riders who had previously attended the park. The incidents occurred on the Haunted Mine Drop, the ride Wongel was on when she was killed, it states.

"They're obviously crushed, losing a child, but to lose a child because of this kind of recklessness in this way, they are just crushed," Caplis told CNN. "They are absolutely determined to hold this amusement park fully accountable through this lawsuit and they correctly believe that they will be protecting other families by doing that."

Glenwood Caverns Adventure Park's did not immediately respond to CNN's request for comment.

An investigation by the Colorado Department of Labor and Employment's Division of Oil and Public Safety revealed Wongel was not buckled into the ride when it launched, according to a report it released in September.

"There are two seatbelts for each passenger, but "When Ms. Estifanos, a six-year-old girl, sat down on the ride, operators did not notice she was sitting on top of both seatbelts," the report said.

"Because Ms. Estifanos was not restrained in the seat she became separated from her seat and fell to the bottom of the (Haunted Mine Drop) shaft, resulting in her death," the report said.

The park's founder, Steve Beckley, told CNN in September that the owners, management and park itself were "heart-broken" by the accident.

"There is no way we can imagine the pain of loss that the Estifanos family and their friends are experiencing," Beckley's statement read. "Safety is, and always has been, our top priority. Since opening our first ride just over 15 years ago, Glenwood Caverns Adventure Park has delivered more than 10 million safe and enjoyable rides."

The park has been working closely with OPS and "independent safety experts" to review the accident, Beckley said.

Dagne and Rahel Estifanos will use their lawsuit to "force the full truth to be disclosed to them, and to the public. Their mission is to protect other families by holding all who are responsible for the killing of their daughter fully accountable, and by sending a loud and clear message to the entire amusement park industry," according to their attorney's statement.