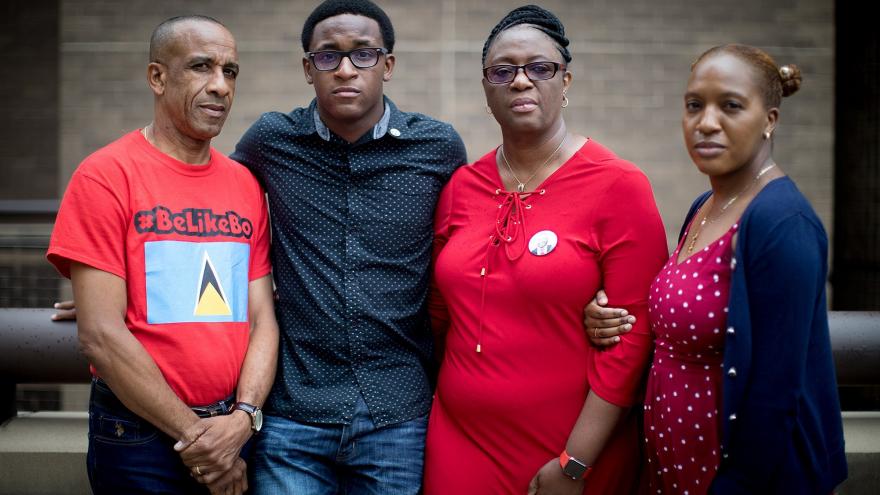 (CNN) -- On the screen before Botham Jean's parents, a video of their son's last moments unexpectedly began playing. Police were trying to save his life as he lay on the floor of his apartment, bleeding from a gunshot wound.

Allison and Bertrum Jean bent over in their seats and looked at the courtroom floor. Bertrum held his hands over his ears and turned to the wall next to his seat.

After a few minutes, Botham's parents and family and friends stood up to leave.

Allison Jean sobbed loudly as she walked out the door. This was the kind of moment she had been dreading and preparing for.

District Judge Tammy Kemp asked for the body camera footage to be played on Wednesday, the third day of the murder trial in Dallas.

The video showed Dallas police performing CPR on Botham on September 6, 2018, moments after off-duty Dallas police officer Amber Guyger shot the 26-year-old accountant in his home. Guyger told police she believed she was entering her apartment, which was one floor below, and encountered a burglar. She is on trial for murder.

The footage was played outside the presence of the jury in a discussion about evidentiary matters.

It was recorded on the body camera of one of the officers who responded after Guyger called 911. It was played in the courtroom on Tuesday, but Allison Jean, along with Botham's sister, Allisa Findley, 37, and other family members were able to leave before it was shown.

Botham's parents saw the video on Wednesday for the first time, S. Lee Merritt, a family attorney told CNN. The Jeans didn't know the judge was going to ask to see the footage, Merritt said.

As Allison and Bertrum Jean were leaving, it appeared that Kemp realized the family had still been in the room.

"I'm so sorry. I didn't give any thought to the alleged victim's family," Kemp said.

Last April, Allison Jean heard the 911 call Guyger placed after the shooting and felt an anger that surprised her. She couldn't hear anyone helping Botham as he lay dying his home, Jean told CNN in an interview from St. Lucia, where she lives and raised Botham. In that moment, she realized she wasn't ready for the trial.

Guyger seemed more concerned about her losing her job than about her son, she said.

Guyger said she started giving first aid after calling police, an affidavit said. Prosecutors have sought to show she was derelict in her efforts to save Botham.

Ever since hearing the 911 call, Jean had been preparing to endure the trial and face her son's killer. In therapy sessions, she had worked through scenarios she might encounter in court and ways to cope. Starting in August, she dedicated her Saturdays to pray and fast. She said a prayer every 30 minutes.

In the prayer for her family, especially her children, she asked for "courage to deal with the trial and acceptance of the outcome," she told CNN.

On Wednesday, Findley and Botham's brother, Brandt, remained in the courtroom as the footage played.

More than an hour later, the Jeans returned. Bertrum Jean was still wiping his eyes.