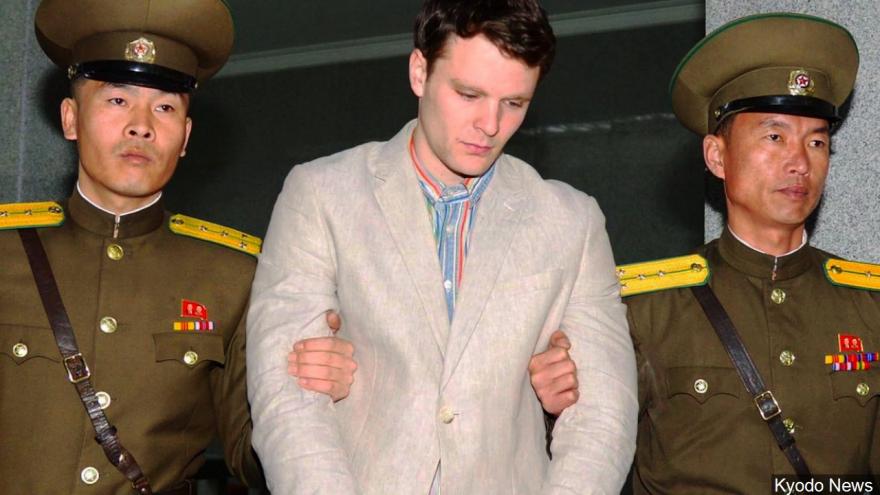 SEOUL, South Korea (AP) — The parents of a former U.S. hostage who died after being released from North Korea in a coma in 2017 say they are committed to finding and shutting down illicit North Korean business assets around the world in efforts to hold its government accountable for widespread human rights abuses.

In a news conference in Seoul on Friday, Fred and Cindy Warmbier also called for the Trump administration to raise North Korea's human rights problems as it engages in negotiations to defuse the country's nuclear threat.

"My mission would be to hold North Korea responsible, to recover and discover their assets around the world," said Fred Warmbier, who was invited to a forum hosted by a Seoul-based group representing the families of South Koreans abducted by the North during the 1950-53 Korean War.

"We feel that if you force North Korea to engage the world in a legal standpoint, then they will have to ultimately have a dialogue. They are not going to come and have a dialogue with us any other way," he said.

The Warmbiers, who live in suburban Cincinnati, Ohio, have claimed that their college student son, Otto, was tortured by North Korea after being convicted in 2016 of trying to steal a propaganda poster and imprisoned for months.

The 22-year-old suffered severe brain damage and died shortly after being returned to the United States in a vegetative state in June 2017.

The North denied that it tortured or cruelly treated the University of Virginia student and called itself the "biggest victim" in his death while accusing Washington and Seoul of orchestrating a smear campaign.

In December last year, a U.S. federal judge ordered North Korea pay more than $500 million in a wrongful death suit filed by the Warmbiers over their son, although they are unlikely to collect on the judgment.

The Warmbiers have been pushing legal action seeking the closure of a hostel operated on the grounds of the North Korean Embassy in Berlin and plan to go after other hostels the country operates in Europe, which they say are aimed at pressuring governments to tighten their enforcement of sanctions against Pyongyang.

"We cannot give up, we can't give them a pass. We have to fight with all of our power," Cindy Warmbier said.

She also expressed hope that the Trump administration would use its diplomatic opening with Pyongyang to address the North's human rights issues.

During the earlier part of his presidency, President Donald Trump strongly criticized North Korea over its dismal human rights record, inviting the Warmbiers to his State of the Union address last year where he lashed out at the "depraved character" of the government led by third-generation leader Kim Jong Un.

But Trump months later began playing down the severity of North Korea's human rights record and showering Kim with praises as they engaged in high-stakes nuclear summitry, which has so far led to three meetings but failed to produce substantial agreements on the North's nuclear disarmament.

Following his second summit with Kim in Vietnam in February, Trump said he takes Kim "at his word" that Kim was unaware of the alleged mistreatment of Otto Warmbier while he was imprisoned there.